by Mary Beth Lock on November 4, 2011 in ZSR Library Letters 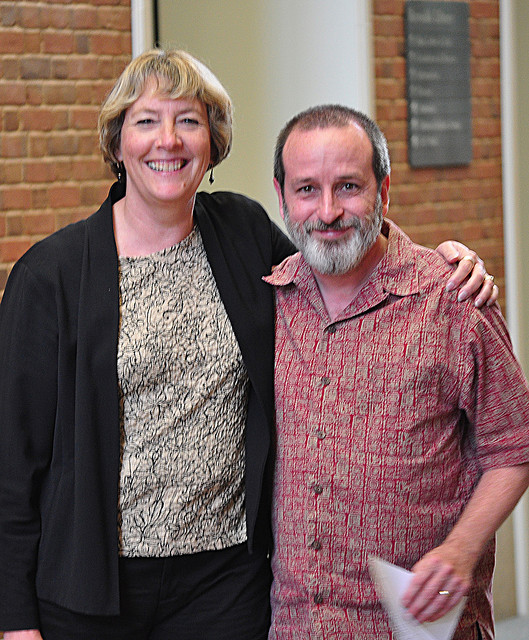 ZSR is pleased to announce that Scott Adair was awarded the “Employee of the Year” in the exempt category at the Eleventh Annual WFU Staff Awards Recognition Luncheon on October 14. A long time employee of the library, Scott has always been recognized as a willing and responsive staff member, doing what was necessary to meet the needs of students and staff alike. This year though, when the library was gearing up to open it’s off site facility, we called on his expertise in many areas, from his knowledge of the library’s collections, his awareness of faculty and student needs, to his careful maneuvering of a fork lift, to do what needed to be done to open the facility successfully.

His nomination read in part: “Marshaling assistance from others in ZSR, he spearheaded the drive to pack up, inventory and move more than 3,000 boxes of materials out of ZSR in the blistering heat over the summer of 2010, one van full of boxes at a time. He worked through aching muscles, days when the temperature topped 90°F, and weeks when many of his otherwise willing assistants went on vacation and left him without help. Once the Off Site Facility opened up in November of 2010 he stalwartly accepted the new challenges it brought. He learned a software package that is anything but easy and managed the move of over 100,000 volumes into the Off Site Storage Facility in about 3 months time. He also worked with an opinionated workforce, and endured frequent interruption from University employees and vendors.”

In his acceptance speech, Scott said:

Longevity has its rewards. The longer you are at Wake Forest, the more you get to participate in its growth. I want to thank everyone who helped make the Library’s offsite storage facility a reality. Many folks from Facilities were involved. They were great. The ZSR staff put forth a Herculean effort in both the planning and the execution stages. While I really appreciate this recognition, I have to say that my real reward is getting to work with so many wonderful people.”

We are very proud of Scott’s accomplishments and that he has earned this well deserved recognition. Well done!

2 Comments on ‘Scott Adair–ZSR and WFU Employee of the Year!’