by Rebecca Petersen May on November 1, 2019 in 5 Questions

This month, Wake Forest University celebrated an annual luncheon to recognize faculty and staff milestones which end with an award for Exempt and Non-Exempt Employees of the Year. 25 Year ZSR Library employee Christian Burris was celebrated for his service and was surprised with the Exempt Employee of the Year award. The nomination was put forward by the Employee Recognition Committee based on submissions from the ZSR Staff Employee of the Year awards in May of this year. 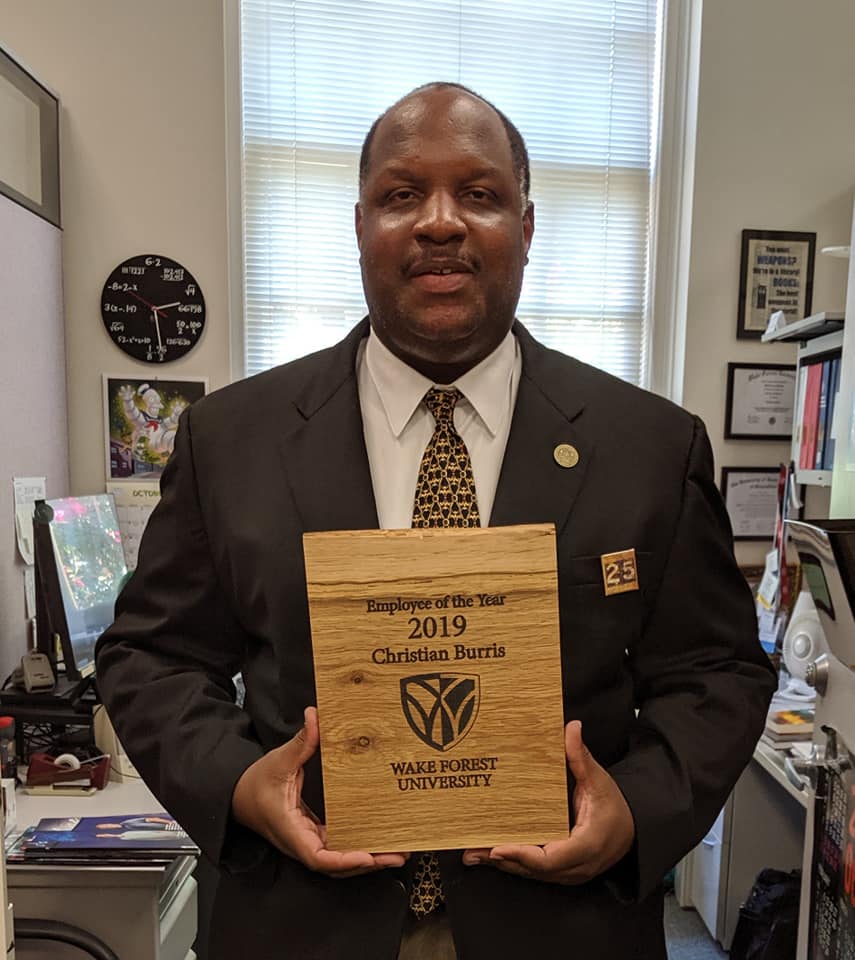 To celebrate Chris’s years of service and his well-deserved win, we sat down with him to ask a few questions and find out more about the man behind the award. We talked about his undergraduate time and starting work at Wake Forest University, his role in the library now, his life outside of ZSR, his advice for undergraduates today, and his surprise at winning this award.

Chris began his undergraduate years at Wake Forest in August of 1989, but actually began working on campus before that. The father of Chris’ friend (current ZSR Library employee Patrick Ferrell) and former high school lab partner got Patrick and Chris jobs on campus during the summer of 1989 delivering telephone books around campus. Chris learned the ins and outs of campus during this job, something that made him quite popular on campus in August when new friends couldn’t find their classes.

Chris began his work in ZSR Library during the summer of his Junior year putting magnetic strips in books on the 7th floor. He remembers the library not being fully air-conditioned, it was hot! He continued working in ZSR after his graduation in 1993. Although he was sending out resumes and eventually working other jobs, he was eventually contacted by Wanda Brown for a part-time job in the library and was hired back in January of 1994. During his part-time work, he began cleaning up the shelf list, was hired full time in May of 1994, and continued his work on reconciling the holdings for the catalog in Venice. 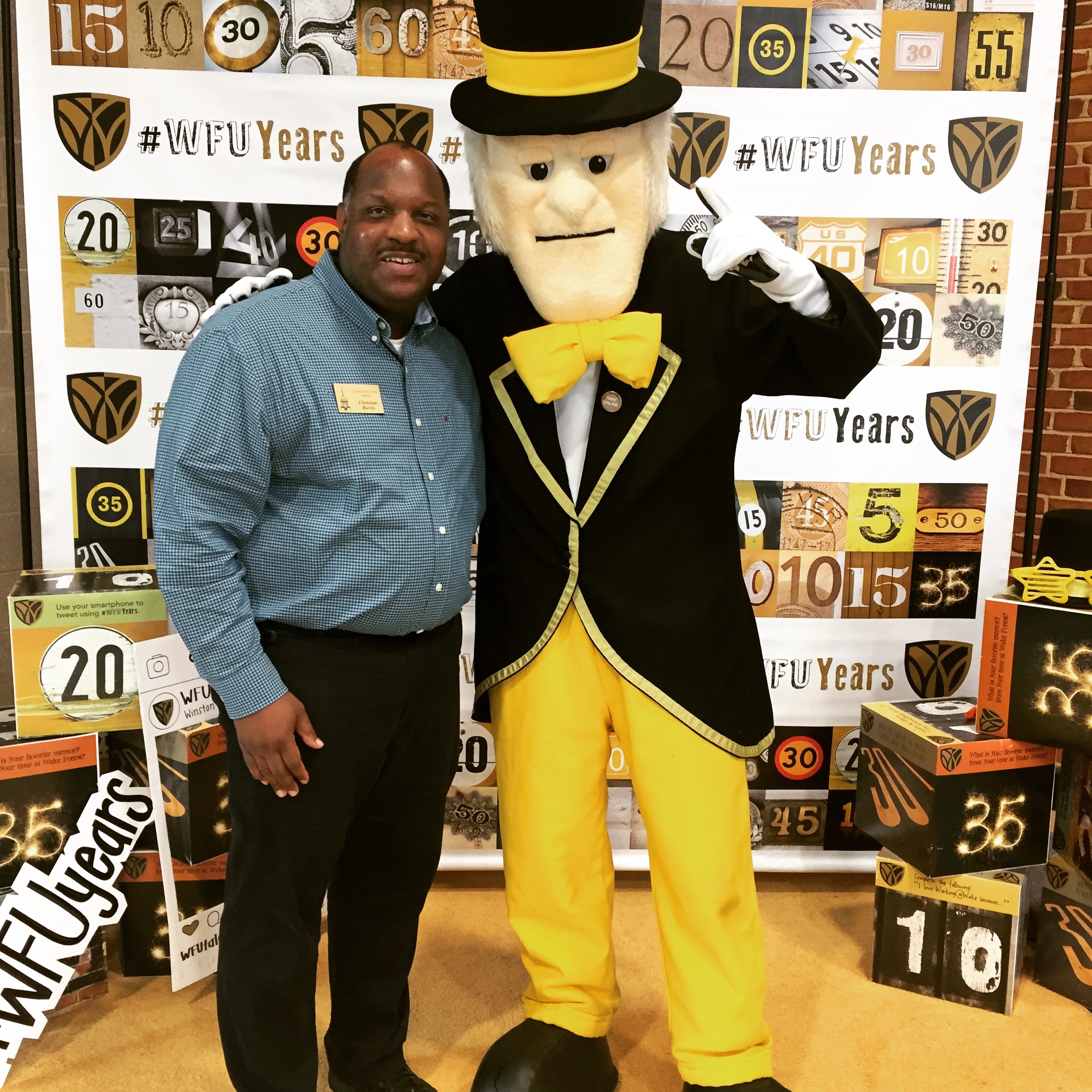 Beginning his career in 1994, Chris’s 25 years of service (so far) are full of fond memories. He enjoys seeing the technologies change and adapting to the needs of the moment. Gone are the Dynix and OCLC terminals, the UNIX commands, and the age before Windows. Positions have changed and gone away, as have technologies, but the people remain some of Chris’s fondest memories. He reminisced about Library wide parties, attending the Candle Tea with Linda Early and her students followed by chili at her house, and the 1996 Olympic torch passing right in front of the library.

As the Serials Acquisitions Coordinator, Chris orders and maintains resources in print, non-print, and electronic formats. He is responsible for the acquisitions and cataloging aspects of Voyager, and also has a hand in spending the collections budget which is why he’s a part of the Collections Management Unit in Resource Services.

Chris is very active in many different communities. With his fraternity Alpha Phi Alpha, Chris has taken on a variety of roles. In his local chapter, he is the recording secretary and the advisor for the Xi Eta chapter here at Wake Forest University. He also serves on the Foundation that the chapter supports for youth initiatives. To give some history, Chris was initiated into the chapter in 2012. His particular group of initiates “hit the ground running” in terms of service and working on various projects. His previous work has included coordinating a reception for Brother David Wagner, the first African American student admitted to Wake law. Another task involved an impromptu speech at the Winston-Salem Forsyth County Schools Science Fair, an event his chapter participates in annually.

Another passion project for Chris is his devotion and service to his church, First Baptist Church Highland Avenue. There, he serves as trustee, de facto web master, and social media manager. His responsibilities include creating a new website for the church, managing their Facebook page, and preparing to launch a SoundCloud account of sermons by the pastor. Chris credits some of these responsibilities to his MLIS…being an academic librarian in the 21st Century provides you with many transferable skills!

In addition to these wonderful community groups that Chris is involved with, he is a participant in many fandoms. It all began with Star Trek…

Chris remembers his first introduction to Star Trek while watching an episode with this father in the mid-1970s. As he watched the Enterprise fly over planets, Chris thought “Oh Wow! This is so cool!” From then on, Chris has been hooked on all things space. He went to see Star Wars in the theater when he was 6 years old, and the passion only grew. He went to see Super Man, Battlestar Galactica, Star Trek the motion picture, and then moved onto comic books.

Chris describes his fandom as “a wide mix.” He enjoys Star Trek, Star Wars, Doctor Who, Harry Potter, Star Gate, Super Hero shows and movies, The Expanse, and more. He attended his first convention in 1990 in Charlotte where George Takei was the guest. Other “cons” include ComicCon in 2011, which he describes as “Pop-culture overload.” One of his fondest memories on a convention is when he met Herbert Jefferson Jr, or “Boomer” from Battlestar Galactica, and got his autograph. Chris was moved by meeting a “black man in a sci-fi show” and Jefferson told him “we’re part of this world too.” Jefferson was also happy to meet Chris! Once he learned that Chris was a librarian, Jefferson described his love of libraries and fond memories of going to libraries with his grandmother.

“Stay engaged and ask questions…and don’t rely on your screen as a way to get all of your information.”

Chris encourages students to put down their phones and have a conversation. Talk to people. He would hate to see those interactions get lost. He also mentioned that students should learn basic skills like writing a check or writing in cursive. Those skills are falling by the wayside. Students should invest in building their own skill-set and “never be afraid to ask a librarian.”

Chris knew he had been nominated because of the email sent out for the nomination but was surprised about the win. He wore a blazer to the luncheon, just in case, but was not expecting the win. Carol Brehm of the Music Department won first for Non-Exempt Employee of the Year, and then Chris began to get nervous. Provost Rogan Kersh began reading the nomination and said “someone who is celebrating their 25th anniversary and a 1993 graduate” and Chris was stunned. Provost Kersh continued reading, announced his name, and Chris’ plus-one to the luncheon, his sister Candice, jumped up and yelled: “that’s my brother!” The table stood and applauded, leaving Chris in complete astonishment. The award includes a plaque and a monetary gift. 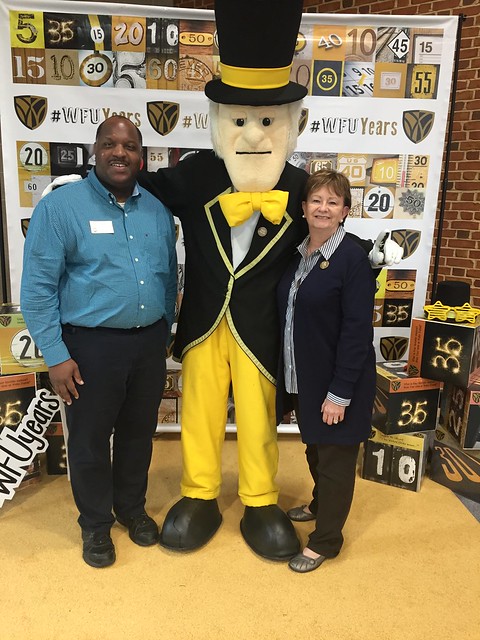 8 Comments on ‘Christian Burris: WFU Exempt Employee of the Year 2019’