On nearly any list of list of best American Novels you will find Mark Twain’s Adventures of Huckleberry Finn. But it might easily never have existed.  Twain nearly abandoned his project midway through its writing, and its publication was temporarily derailed by a practical joke.

Twain’s first novel, The Adventures of Tom Sawyer, was published in the spring of 1876 to great popular success.

…another boys’ book—more to be at work than anything else. I have written 400 pages on it—therefore it is very nearly half done. It is Huck Finn’s Autobiography. I like it only tolerably well, as far as I have got, & may possibly [pigeon-hole] or burn the MS when it is done.

Twain did indeed pigeon-hole his manuscript for several years, and he did not complete it until 1883. When the novel was finally finished, it was a very different book than the Tom Sawyer sequel that Twain had begun.  Huckleberry Finn takes on one aspect of Twain’s pre-Civil War childhood that Tom Sawyer did not: slavery.

In The Adventures of Tom Sawyer Huckleberry Finn is a secondary character, a “romantic outcast” who lives on the fringes of civilized society.

In Huckleberry Finn Huck takes over as first-person narrator of his own story. The novel was Twain’s first attempt at writing an entire book in dialect, and he took pains to get his characters’ voices right. And without Huck’s distinctive voice and perspective, Twain could not have written the book that he did. In his introduction to a 1950 edition of Huckleberry Finn, Twain’s fellow-Missourian T.S. Eliot observed that

Huck has not imagination, in the sense in which Tom has it: he has, instead, vision. He sees the real world; and he does not judge it– he allows it to judge itself. . . . Mark Twain could not have written . . . with that economy and restraint, with just the right details and no more, and leaving to the reader to make his own moral reflections, unless he had been writing in the person of Huck. And the style of the book, which is the style of Huck, is what makes it a far more convincing indictment of slavery than the sensationalist propaganda of Uncle Tom’s Cabin. [The Adventures of Huckleberry Finn (London: The Cresset Press, 1950) p.ix-x]

The process of publishing Huckleberry Finn was also an arduous one. Twain prided himself on being a shrewd businessman and involved himself in all aspects of publishing and marketing his own books. As one might expect, this led to difficult relations with his publishers. As Huckleberry Finn was nearing completion in 1884, Twain was becoming dissatisfied with his current publisher, James R. Osgood (who was indeed bankrupt by 1885). So Twain formed his own publishing company in partnership with his nephew Charles L. Webster.

Twain, as usual, had opinions on everything from marketing to cover design. In February 1884, for example, he wrote to Webster suggesting that they offer a package deal for buyers purchasing Tom Sawyer, The Prince and the Pauper, and the new Huckleberry Finn— a fine idea, except that the previous titles were still under copyright to other publishers [Mark Twain’s Letters to His Publishers, 172]. In April he exhorted Webster to enlist as many pre-publication subscribers as possible and to time the book’s release for the Christmas market:

Keep it diligently in mind that we don’t issue till we have made a big sale. . . . Get at your canvassing early, and drive it with all your might, with the intent and purpose of issuing on the 10th (or 15th) of next December (the best time in the year to tumble a big pile into the trade)– but if we haven’t got 40,000 orders then, we simply postpone publication till we’ve got them. It is a plain, simple policy, and would have saved both of my last books if it had been followed. There is not going to be any reason whatever, why this book should not succeed– and it shall and must. [173]

But the American edition of Huckleberry Finn was not published in time for the 1884 holiday season, due to circumstances beyond the control of its author and publisher. The first set of books went out to reviewers and subscribers in November as planned. But it was soon discovered that an unknown prankster had altered the printing plate for an illustration on page 283 so that Uncle Silas was shown in a state of indecent exposure.

Tom Sawyer would no doubt have approved of the prank; Mark Twain, on the other hand, was furious. He recalled nearly all of the copies and had the pages replaced with a corrected version.  (A few copies of the censored illustration remain in circulation and command a very high price from collectors. )

The British edition, published in London by Chatto & Windus, made it through the print shop unscathed and was published in December 1884.

The American first edition would not appear until February of the next year. Twain had to settle for publishing a few chapters of Huckleberry Finn in the December 1884 and January 1885 Century Magazine.

The 174 illustrations and the cover design for Huckleberry Finn were by E. W. Kemble, a 23-year-old magazine artist selected by Twain. 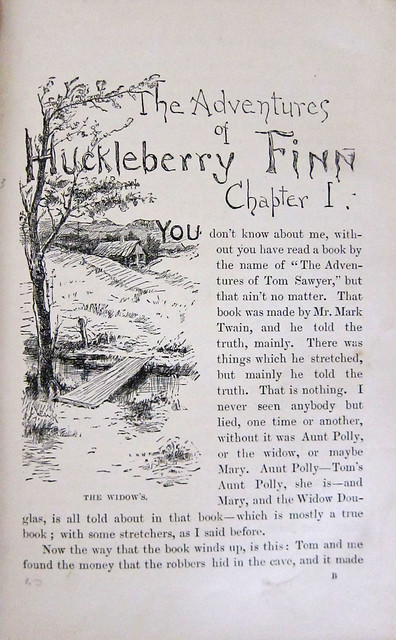 Twain understood well the importance of visual images to the overall reading experience, and he had definite ideas about what his characters should look like. He was especially concerned that Huck and the other principal characters look attractive enough to be sympathetic. The author occasionally took Kemble to task for submitting illustrations that veered too far toward the comic grotesque. 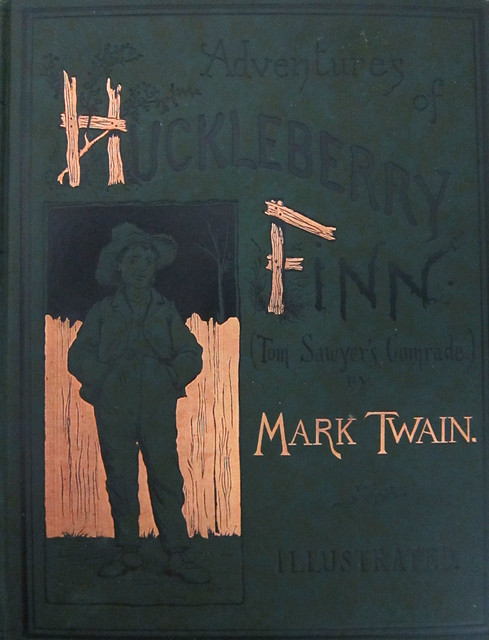 Except for a few copies in deluxe leather bindings, the first edition of Huckleberry Finn appeared in illustrated green or blue cloth. 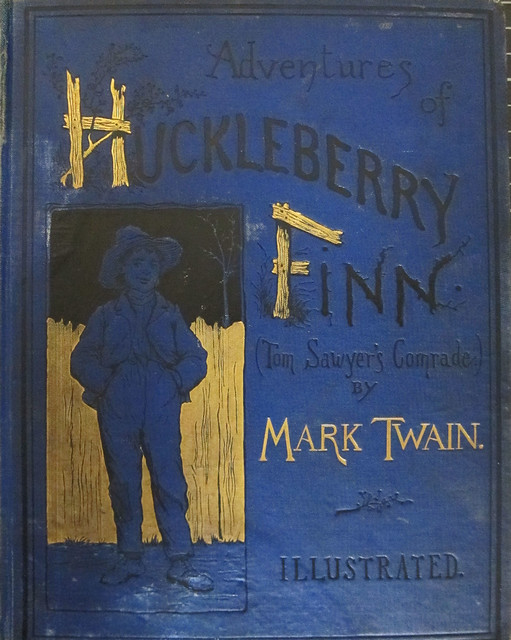 The first edition of  Huckleberry Finn sold well and proved popular with readers, but it was controversial from the beginning. Its critical reception was mixed. Some immediately hailed the novel as brilliant satire. But others were put off by the rough language and general unpleasantness of many of the characters. In a famous incident, the book was banned from the Concord, Massachusetts public library, whose board of directors included author Louisa May Alcott. By the mid-20th century Huckleberry Finn was an acknowledged classic and a fixture on high school reading lists. But critics then began to object to the novel’s all too historically accurate depiction 19th century race relations and racial epithets. This controversy is by no means resolves, as reactions to a 2011 attempt to censor Huck’s offensive language demonstrate. 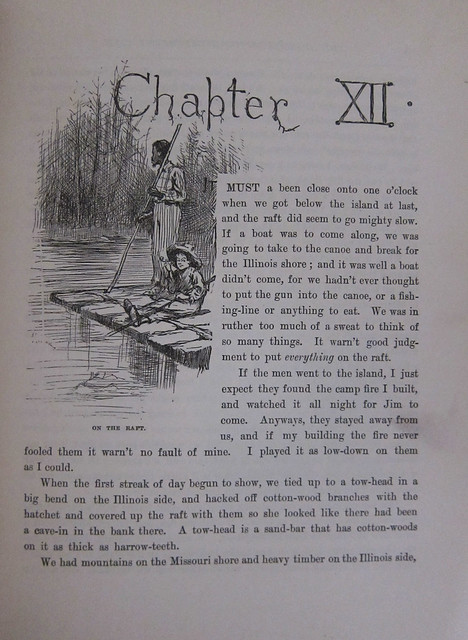 Mark Twain would no doubt be pleased that Huckleberry Finn is still the subject of impassioned debate.

ZSR Special Collections has several copies of the 1885 first edition of The Adventures of Huckleberry Finn in various states. The collection also has the 1884 British edition and several later editions, including a 1901 edition inscribed by the author to Frank Willard. Willard wrote under the pseudonym Josiah Flynt the book Tramping with Tramps, a copy of which was in Mark Twain’s personal library.

2 Comments on ‘Adventures of Huckleberry Finn, by Mark Twain (1885)’