by Derrik Hiatt on April 25, 2012 in Professional Development

I had a very good conference experience with the 2012 Electronic Resources & Libraries (ER&L) conference. It’s almost overwhelming just to look at all the notes I took! ER&L really packs a lot into a 2.5-day conference, averaging 8 sessions a day. And if that’s not enough going on, you can follow even more sessions via Twitter.

My two main areas of focus for this conference were e-resource management systems (ERMS) and demand-driven acquisition (DDA).

ERMS. The first set of breakout sessions included a panel of 8 librarians representing a total of 5 ERM systems. I was one of two CORAL users on the panel. For those of you who are wondering, an ERMS helps Resource Services personnel keep track of databases and licenses-things like license terms, user limits, vendor contact information, etc. The panel discussion used a “buffet” metaphor, and the idea was for audience members to get a sampling of the different ERMS options. The format was fast-moving, even with a two-hour time slot. It was interesting how different sites use the same product differently, and see different strengths & weaknesses of that product. Common themes that emerged in the discussion included using the ERMS for internal communication, desires for better usage statistics management, and Interlibrary Loan permission as the only license term that anyone outside of e-resource management really cares about. And I discovered I’m not the only one who thinks CORAL should include subject headings for databases. 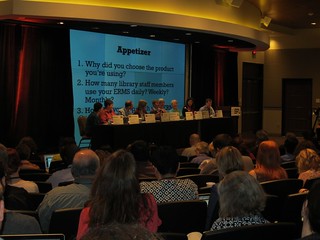 At the CORAL user group meeting (my first as an actual user), I learned more about the new CORAL Steering Committee. As I have described in previous blog posts, CORAL was developed by librarians at Notre Dame. But as adoption has increased, Notre Dame’s capacity to develop the product has been diminished. So they have formed a Steering Committee, with librarians from Texas A&M, Duke Medical Library, and the College of New Jersey. The committee will make product decisions and actively develop fixes and enhancements. As always, other libraries are also allowed to contribute code.

On a more general ERMS note, I attended a presentation by Tim Jewell, who has chaired a NISO working group on ERM Data Standards and Best Practices <http://www.niso.org/workrooms/ermreview>, a successor to the ERMI data initiative. Among other things, ERMI defined standards for what data elements should be tracked by an ERMS and has given direction to the development of other e-resource management standards such as SUSHI (usage statistics) and ONIX-PL (communication of license terms). The working group released a report in January (available at the website). The report (and Jewell’s presentation) recognizes that other standards initiatives, many of which have grown out of ERMI, provide greater granularity than ERMI. Thus the working group recommended that NISO not continue to develop the ERMI data dictionary, but instead continue to support these more targeted initiatives.

Sorry for the ERM geek-out; I hope I didn’t overwhelm you too much. Moving on…

DDA. Based on this conference, it seems like demand-driven acquisition is moving out of the pilot phase and is moving toward becoming a more accepted practice. Carol and I presented stats and findings from ZSR’s first year of DDA. We also saw data from the University of Denver’s DDA program, and it appears that they spent about $6 per FTE during fiscal year 2011, close to ZSR’s per-FTE spend of $5. But librarians from Calif. State Fullerton said that their DDA expenditure increased significantly in the second year-something for us to keep an eye on. We also learned that NISO is reviewing a proposal to develop best practices for DDA.

One question about DDA that was brought up a couple of times was planning for removal of titles. As the number of available titles increases, is there a need to “weed” outdated ones? If so, how would this be accomplished? No one offered any answers, just raising the question.

Publishers and vendors are also coming to grips with DDA. DDA is forcing them to re-think their sales models, moving from the predictability of Approval sales to the unpredictable volume and timing of patron-driven sales. Oxford Univ. Press is investing more heavily in discoverability, trying to make all Oxford content cross-searchable. Matt Nauman, from YBP, described their DDA service, and said that YBP is seeing a need to develop an e-book collection management service rather than relying strictly on sales.

JSTOR. John Lenahan from ITHAKA described some of the results of JSTOR user data analysis, and some of the projects they are working on as a result. JSTOR has found that a major portion of their users are coming to JSTOR from outside the library (mostly via Google), resulting in a high number of unnecessary turnaways. So JSTOR is developing some really cool features to address this. First of all, JSTOR has made all journal content published prior to 1923 free to anyone. The are also working on a “Register to Read” function, where a user can “borrow” up to 3 articles at a time. What’s really cool, though, is the “Institutional Finder,” which will prompt the user saying “You are not logged in from an affiliated institution,” and will allow the user to select their university and log in via the proxy server. Finally, they are building an integration with discovery services, providing the user with a link to re-do their JSTOR search on their library’s Summon instance.

Turnover. I attended a session on reducing information loss when there’s staff turnover, thinking of all the information stored in an individual’s memory, e-mail account, hard drive, etc. Strategies suggested included using an ERMS, wikis &/or LibGuides, and project management tools. The speaker also suggested using a checklist for departing personnel. One tip I liked was to create a generic institutional e-mail account to list with vendors so that when a person leaves you can just redirect that account rather than having to contact all those vendors.

AR. I learned about a project at the University of Manchester, where they have developed Augmented Reality (AR) apps in conjunction with Special Collections exhibits. For example, a student might point their smartphone camera at a 200-year-old printing press, or a copy of Dante’s Inferno, and can tap certain areas of their screen to get more information. The externally-funded project represented cooperation among software developers, tech support, librarians, and academic departments. They found it to be most meaningful for 1st- and 2nd-year undergraduates, less so for experienced students and researchers. In case you’re wondering (like I was), their Special Collections dept. has iPads available for checkout for patrons who don’t have a smartphone. More about the project is available at http://teamscarlet.wordpress.com/ .

ER&L is a great conference to follow on Twitter. There are quite a few attendees (including yours truly) who tweet during sessions, and with only three or four concurrent sessions, the conversations are fairly easy to follow. The conference organizers tried something new this year–in addition to the conference hashtag, they assigned a separate hashtag for each session. It was a good idea (IMHO), but apparently wasn’t publicized very well and had only moderate uptake. It will probably work better next year.

Finally, here are some miscellaneous sound bytes either from my notes or from the conference Twitter stream:
@AnAnarchivist: “Accepting other people’s opinions is an expectation, we want other’s opinions, and expect our opinions to be welcome. #erl12 #millennials”
“Unlikely you’ll ever be down to 1 tool” for managing e-resources – Heidi Zuniga, University of Colorado medical campus
“IP addresses are not an identity” – Thomas Blood, Naval Postgraduate School
@library_chic: “print books were all shareable across consortia. ebooks are, in most cases, not shareable #consortia #erl12”
@annacreech: “What a cataloger thinks a title is and what a vendor thinks a title is are two different things. #ebookpbook #erl12”
@tmvogel: “UDenver: Going through data fast, but it looks like they saw higher per title usage for the titles in both formats #erl12 #ebookpbook”