by Susan Smith on April 2, 2015 in Professional Development 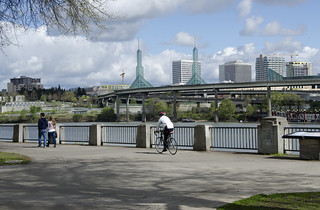 View of the twin spires of the Oregon Convention Center
from Waterfront Park, across the Williamette River

Selecting Portland as the site for ACRL 2015 seems to have been a wise choice. There was a record attendance (registrations) of nearly 3400. I think it was a combination of Portland attracting first-time visitors (like me) and the rich programming offered (over 330 sessions). For me, Portland was a perfect conference city. It has a unique personality coupled with excellent public transportation, good food AND it is most bicycle friendly! I arrived in town in time to jump on the light rail at the airport, and jump off (suitcase in hand) at the conference center in time for the opening keynote and exhibit hall opening reception. The keynote speaker was G. Willow Wilson, creator of the Ms. Marvel comic series starring a Muslim superhero named Kamala Khan. Having been raised in a household where comic books were not allowed (a story for another day), I am not a comic book aficionado and was not familiar with her work. So I really enjoyed hearing how the series came about and how it is now so well received that the character is going to be an Avenger! She also spoke about her multicultural background and the importance of listening to the narratives of native populations that are not the ones most of us learned in school.

I attended the Thursday vendor-sponsored breakfast where Bill Badke spoke (See Roz’s report for more information). Most of his talk was a self-proclaimed rant with these three themes – 1. Too much data, not enough metadata (the Web is anarchy under the control of a cheap dog, the search engine), 2. Epistemology – Students lack understanding about where information comes from, and 3. Students are challenged to articulate their information need. His recommendation for librarians – don’t fade away, seize the day!

People often think of ACRL as more useful for those librarians involved with instruction and reference. However, I was able to find a broad range of topics so I was able to attend concurrent sessions on data sharing/stewardship, well-being, instruction collaboration between research & instruction and special collections, and weeding (our own Carol Cramer). I particularly enjoyed a presentation by our former colleague Elisabeth Leonard (Executive Market Research Manager, SAGE) about research she conducted on students and their use of videos in higher education. Her white paper provides the details of the research findings. As you might imagine, there were too many choices during each time-slot, but one nice side benefit of attending is that registrants can access the ACRL Virtual Conference content and every contributed paper, invited paper, panel session, and TechConnect presentation offered at ACRL 2015 (which were recorded) for the next year.

This year was the 75th anniversary of ACRL and this was celebrated in a number of ways. Most impressive were the scores (it seemed) of cakes that placed throughout the exhibit hall on Thursday afternoon. On a more serious note, I attended an invited panel session by the authors of the ACRL 75th anniversary publication New Roles for the Road Ahead. Stephen Bell, Lorcan Demsey and Barbara Fister each led a discussion on their particular assignments in the report (Bell -higher ed, Dempsey – technology, Fister – information literacy).

Often the closing keynote is underwhelming because people start to leave to catch flights home and sometimes this results in a waning level of energy for the speaker. I was curious if this would be the case for no other reason than the choices for getting home were to leave first thing Saturday morning or late Saturday evening on the red eye. However, ACRL offered up Lawrence Lessig as the closing speaker, so it became a no-brainer for me to book the red eye home! And that seemed to be the consensus of most of the conference attendees because the room was full. He discussed three projects that he said are really one idea – the value of equality. His current project is Corruption in America. He described what is happening in America’s elections is Tweedism (Boss Tweed was a politician who said “I don’t care who does the electing, so long as I get to do the nominating.”). Lessig explained how the funding bias present in the US primary selection results in a lack of democratic process. (TED Talk by Lessig). The second project he discussed was net neutrality and how recent rulings as the Internet as a utility will preserve equality. The third project was Open Access. He talked movingly about Aaron Swartz (developed RSS and Creative Commons and committed suicide at age 26 after he was prosecuted for downloading JSTOR articles and making them freely accessible). Swartz’s viewpoint on copyright was that current use of it doesn’t serve its purpose. It restricts access to knowledge elites, and the rest of the world is not included. He wanted equal access to knowledge. Withholding that knowledge makes it impossible for most to build on that knowledge to create new knowledge.

One last tidbit about Portland and the conference. I discovered that in Portland, food trucks are a big deal, there are over 500 of them scattered throughout the city. So the main lunch venue provided to all the ACRL attendees was a parking lot lined with food trucks. You all know how librarians are at meal time, and the picture below shows the long lines where everyone patiently queued to wait for their favorite cuisine. 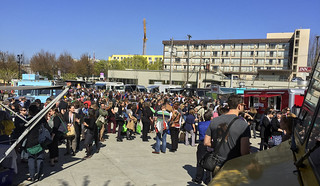