by Kathy Shields on July 5, 2017 in Professional Development

This ALA marked by first time back in Chicago since my very FIRST ALA, back in 2009! Although I did not get to explore the city as much as I might have liked, I had a great time at the conference re-connecting with colleagues from around the country and, of course, learning a few things along the way!

I was interested in this program because Hu and I are looking at ways to bring out the social justice elements of the Framework in our LIB 210 course this year. Laura, who is a professor in the LIS program at Simmons, went through each of the ACRL Frames and highlighted that frame’s connection to social justice. She also shared some class activities for a few of the frames to highlight that connection for students. She also proposed a new frame, called Information Social Justice. She argues that SJ will get buried if we have to seek it out between the lines of other frames. I look forward to linking her presentation when it is available, but in the meantime, you can review the slides from this LOEX Presentation she did with Lisa Hinchliffe on developing new frames.

This was one of three presentations shared at the RUSA/RSS Reference Research Forum. Four researchers from Rutgers University analyzed a large random sample of chat transcripts from QuestionPoint from 2006, 2010, and 2016 to look for any examples of microaggressions. They found that only 3% of all transcripts contained microaggressions from the librarian, and the vast majority of these were microinvalidations (defined as a form of microaggression that excludes or negates a person’s thoughts or feelings). These took the form of assuming the user’s search independence, calling the user out (ex. “You should really know how to find a book!”), assuming the user’s technical literacy, and assuming the user’s information need (ex. When a patron asked for help with finding information on divorce, the librarian assumed the person was in a heterosexual relationship.). The authors also provided some guidance for how to mitigate microaggressions, including avoiding assumptions, listening and waiting for feedback from the patron, and watching out for “positive microaggressions” such as “What did you do for Christmas?’ which assumes their celebration of that holiday. It was reassuring to hear that we are doing a good job of avoiding these in virtual reference for the most part, but it’s a helpful reminder to me when dealing with students online or face-to-face to really listen and allow students to speak for themselves rather than making assumptions or judgments in order to make them feel comfortable asking for help. One important area of further study would be for researchers from different background to analyze transcripts, as all four of the researchers in this particular study were white females (a limitation that they acknowledged).

I had a personal interest in this program, as well as an interest from a History standpoint, since these events took place in my home state of Mississippi. Ms. Hollis was one of the Tougaloo Nine, a group of students at Tougaloo College, who walked into the whites-only public library in downtown Jackson in 1961 and staged a “read-in,” consulting resources that they could not get in the blacks-only library in town. We watched the video footage taken that day outside and inside the library, which showed the students walking in, sitting down, and then being escorted out by police and put in squad cars to be taken to jail.  This event was, I believe, the first of its kind in Jackson and led to the eventual desegregation of the public libraries in Jackson (although mostly in the hope that this action would appease people so they wouldn’t push for it in other places). Ms. Hollis’s story is incredibly powerful, and if you want to learn more, there was an article about this in the most recent American Libraries, a write-up about the ALA program online, and she has written a book. In addition, a book is coming out next year titled, “The Desegregation of Public Libraries in the Jim Crow South: Civil Rights and Local Activism”, written by Wayne and Shirley Wiegand, that promises to explore more of the stories surrounding libraries and their role (or lack thereof) in the civil rights movement.

I attended a few other sessions, as well as the RUSA-HS Executive Committee meeting. I’m the incoming secretary for that group, and I look forward to my involvement there! There were lots of other sessions I wanted to attend, and I look forward to watching them when the recordings are released in a few weeks, including the session on the changes in the upcoming 17th edition of the Chicago Manual of Style (which was unfortunately during my committee meeting!).

Mini UNCG LIS Alumni reunion at the Kanopy party at the Art Institute! 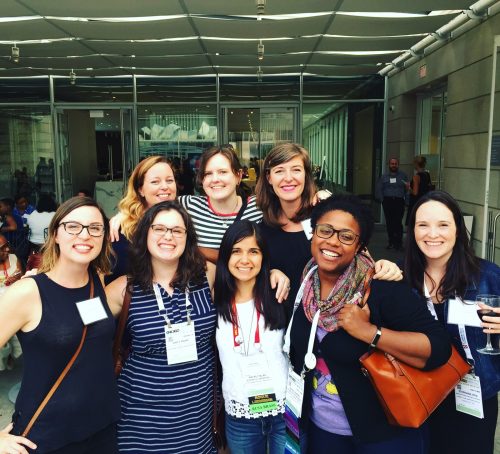 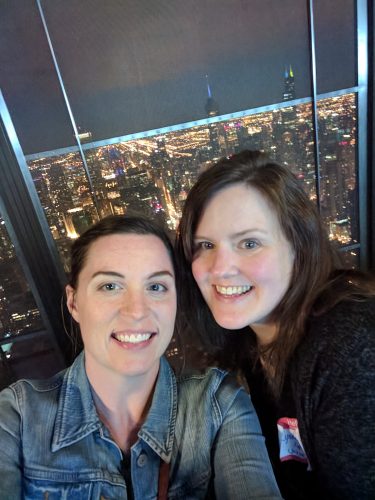 On Monday, after my committee meeting, I had some time to kill and happened upon the Chicago Cultural Center. I stopped to chat with the person at the welcome desk and discovered that this building was Chicago’s first central public library! When the new Harold Washington branch was built, they converted the old building into a cultural center, which hosts art exhibitions and community programs. The building retains its original Tiffany dome (the world’s largest!) and features quotes about books in the marble panels around the room, as well as other book and library-themed symbols. As you can see from some of the photos on its site, it’s absolutely beautiful, free, and well worth your time (and practically next door to an amazing coffee shop, Intelligentsia, which fueled my final conference day).

The amazing Carla Hayden was at ALA with a huge staff from the LOC and did some Q&As in the exhibit hall. 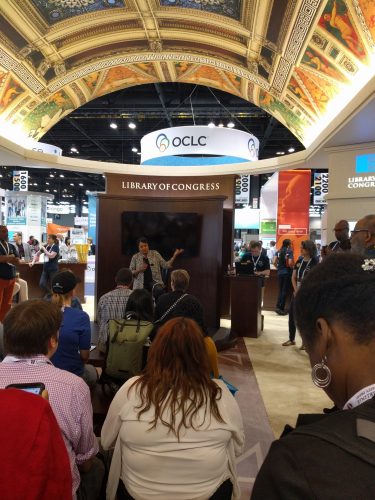 And, of course, I grabbed some books, ate some delicious food and drinks, spent quality time with colleagues, and generally enjoyed my time in the amazing city of Chicago!