by Tanya Zanish-Belcher on August 31, 2018 in Professional Development

While it is hard to condense both a year and a week into a blog post, I will certainly try my best. Serving as President of the Society of American Archivists (SAA) over the past year has certainly been a tremendous experience, both personally and professionally. I had to deal with a multitude of issues ranging from the discontinuing of the Archives and Archivists Listserv, responding to events in Charlottesville, and making the difficult decision (due to uncertainty regarding state legislation) to hold the annual meeting in Austin, TX in 2019. In addition, the SAA Council responded to many, many federal records issues (with the assistance of the Committee on Public Policy, the Intellectual Property Working Group, and the Issues and Advocacy Section) focusing on Net Neutrality, the nomination of Gina Haspel as Director of the CIA, the Presidential Records Act, and a Statement on Removal of ISIS Records from Iraq by New York Times Reporter.

I found the President’s Off the Record Blog to be helpful in responding to current issues in the profession including A Statement on Charlottesville, Disaster Resources, Surveys on Professional Development and Mid-Career Needs, Archives Questions Which Need Answers, Grappling with our Difficult Pasts, Advocacy Building Blocks, and What about Invisible Labor? I also signed numerous petitions and letters, and sent letters to the New York Times regarding the destruction of ICE Records and the Chronicle of Higher Education.

But what of the annual meeting? Here is the one of the views from my hotel suite, where you can see the Washington Monument and the Capitol (far in the distance). 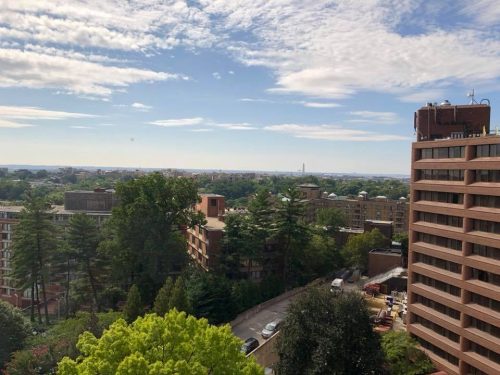 I attended and coordinated my last Council meeting where we endorsed the long overdue Endorsement of the Protocols for Native American Archival Materials. I also attended meetings of the Diversity Committee, Membership Committee, the Task Force for Accessibility (for those with disabilities), and the SAA Foundation Board. On Thursday, I opened the first plenary, along with the Presidents of the Council of State Archivists and the National Association of Government Archives and Records Administrators (NAGARA). And in my most important perk as SAA President, I was able to introduce my selected keynote speaker for the meeting, Zeynep Tufekci.

On Friday, I delivered my President’s Address. A longer video version is available here (thanks to WFU’s Mike Shaw and his teleprompter) and a written version is available here. A longer version will be published in the American Archivist next spring. I coordinated a meeting of allied professional organizations including the Association for College and Research Libraries (ACRL), the National Council on Public History (NCPH), the American Association of Museums (AAM), the American Association for State and Local History (AASLH), the Coalition of Networked Information (CNI), the Digital Library Federation (DLF), among others, and finished the day by running the SAA Business Meeting. And of course, I visited with many friends and well-wishers.

I have been a member of SAA since I began my first job at the Alabama Dept. of Archives & History in 1989. As I made my way through the ranks of involvement—chairing Roundtables and Sections, then service on Committees, co-editing Perspectives on Women’s Archives, I always made time to do the things which meant the most to me–coordinating the first three years (1997-2000) of the Navigator Program, volunteering in the Career Center, and serving as a Mentor. SAA has provided me with many rich experiences, a multitude of colleagues and friends, and the opportunity to give back for which I will always be grateful.

8 Comments on ‘Tanya at SAA’