by Mary Beth Lock on July 9, 2021 in Professional Development

I, like others have mentioned, think I more “experienced” than “attended” ALA Annual’s virtual conference. It was exhausting to try to be both “in community” with others remotely, while ignoring pressing needs of my work-a-day life when there were things equally accessible through my in box, and tempting to resolve through my keyboard.  Online conferences, I hope, will be a relic of the past.

In between regular sessions, I had the “live stream” just running on my computer. The “live stream” was mostly sponsored book talks and I did manage to see quite a few authors. Stanley  Tucci talked about his family experiences and food. (Simon and Schuster sponsored talk.) His book Taste: My Life Through Food is out in September. Charles Person, a Freedom Rider, discussed his book, Busses are a Comin’: Memoirs of a Freedom Rider which tells a first person account of his experiences. At one point he reminisced how, in Alabama, a violent crowd, just coming from Sunday services at church, were shouting “Burn them all” as they surrounded his bus.

Areli Morales is the author of a picture book, Areli is a Dreamer. It tells her own immigration story, and how she hopes it will help young readers understand the immigrant experience. She also talked about the importance of building safe spaces of support for those young immigrants, and libraries can aid in that effort. Language barriers and cultural differences are especially hard for young people to bridge. Another featured speaker was Eve Ewing. Author of Maya and the Robot, the story of a Black girl who is a science whiz who builds a robot to help with her 5th grade anxieties and need to fit in. I actually managed to enter a drawing and win this book! And they mailed it to me! 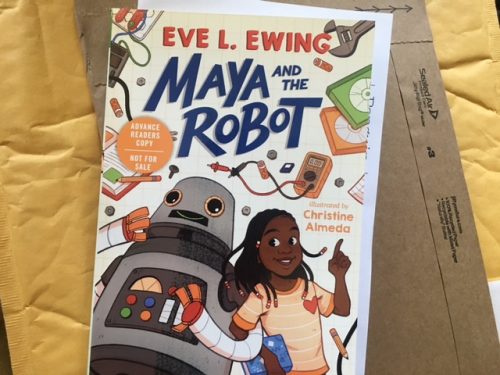 One of the challenges of the ALA programming was the variety of ways that different groups could make their programming accessible, which led to an unusual mix of sessions that were either easy to navigate or very difficult to jump in on. Unfortunately, one didn’t know which to expect at the start of the session. The American Association of School Libraries: Independent Schools Section (AASL ISS) session Beyond the pandemic: Looking Forward after a year of challenges was a tricky session to get onto. While it was listed on the program, one had to register in advance to be let in. As a result, I had to wait a few minutes before being granted entry. (Allowing me some time to catch up on a few emails.) It was a session where many of the common problems of the past year were reviewed and we found common responses to the problems.  Different libraries had different issues that were most pressing and varying responses used to recover. Both public and academic libraries were represented. It was useful as a session to vent, but didn’t uncover any interesting new strategies.

The Library Facilities and Interiors Interest Group Discussion Session, which is a discussion group I always look forward to had a wide ranging free-flowing talk. It started with an open discussion about how tough a year this was; different strategies employed to pivot to online instruction; de densification; Zoom fatigue; innovation fatigue. One method mentioned to maximize self care was the importance of taking some time to acknowledge what we went through, and not rush to return to pre-pandemic times. A discussion on library hours revealed that several academic libraries are considering reducing overnight hours in the next academic year. Planned furniture changes led to a common desire for less soft seating. The library’s ability to make determinations about return to work policies, and how much/little impact the work force had on decisions was also discussed. We also had a very interesting discussion on naming and unnaming buildings. Iowa State had posted both their naming and unnaming policies. Interesting!

The session that I participated in for ALA was called “How We Are Marching: EDI Efforts Across ACRL.”  As chair of the ACRL EDI Committee this year, I reached out to other groups also working on EDI initiatives and asked them to co-present on what they were doing. We had representatives from across ACRL give highlights of the awesome work they are doing to advance EDI across the organization. For those who registered for ALA, the recording is here. For those interested in the content,  the slide deck is here

Also, the Lonnie Bunch and Barak Obama session was recorded and a portion of it is on ALA’s website here. As others have stated, I hope the virtual conferences are a thing of the past. In addition to the heat and humidity and the hassle of travel, I miss the swag, (despite the win of the book), the meet ups, and the conversation!