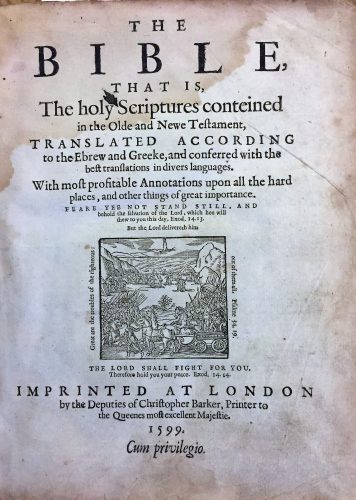 Title The Bible, that is, the Holy Scriptures conteined in the Olde and New Testament
Date 1599

This translation, first published in 1560, was the Bible of Shakespeare and his contemporaries, and that of the Mayflower Puritans. It was commonly known as the Geneva Bible, since it was a translation by and for English Protestants who fled to Geneva during reign of the Catholic Queen Mary. The Geneva Bible remained the most popular text for personal use even after the publication of the new official translation commissioned by King James in 1611. In frustration, James finally outlawed the Geneva Bible in 1616. Even then illegal copies circulated widely, and Wake Forest’s copy is probably one of them. It purports to have been published by Christopher Barker in London in 1599, but it is likely a pirated edition published in Amsterdam and smuggled into England in the early 17th century.