by Rebecca Petersen May on November 2, 2010 in Digital Projects, News & Events, University Archives 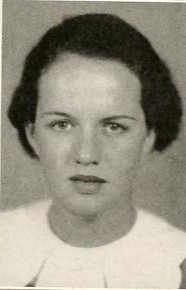 I have made a very interesting discovery while accessioning the 1937 Howler “markup” from Charlotte Engraving Company, Charlotte, NC. Perusing the hairstyles and facial expressions of the male graduates of the senior class of 1937, I came across the angelic face of a young woman, Ruth Pritchard of Wake Forest, North Carolina. According to the Wake Forest website, women were not admitted until 1942, but as can be seen in the recently digitized 1937 Howler pg. 41, women (including a Junior named Helen Bryan, pg. 49) were showing up in yearbooks before the shortage of men during World War II. Can anyone shed more light on the appearance of women in pre-1942 yearbooks?