by Rebecca Petersen May on March 4, 2013 in News & Events in Special Collections, University Archives

This post was written by Paige Horton, student assistant in Special Collections and Archives.

Women and Wake Forest have quite the colorful history. In honor of Women’s History Month we here at Special Collections dug around and found something very special for you: The Deans Record Group: Dean of Women (RG4.3), and Women’s Government Association (RG4.31) Collections.

The collection itself is made up of minutes, correspondence, and subject files that feature staff, student committees, and societies. The University Archives is home to the administrative paperwork available in the finding aid, and the Women’s Government Association handbooks can be found in the library catalog. Students can get a first-hand look at the Women’s Government Association (WGA) handbooks which details all the guidelines women had to live by at Wake Forest. 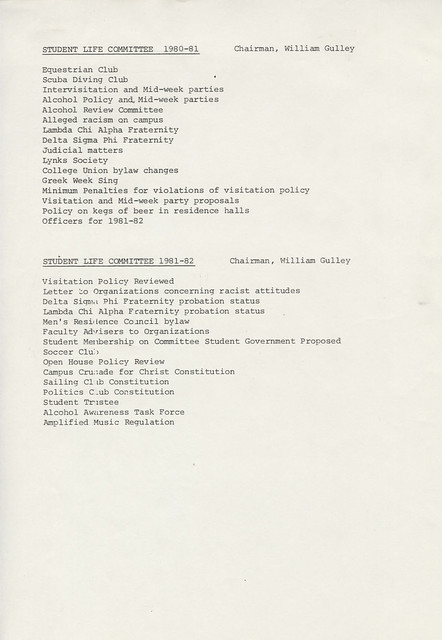 The History of Wake Forest provides an interesting look into the admission of women. Women of junior and senior status were officially admitted into Wake Forest College in 1942. The College came to this decision based on the amount of students they could potentially have:

From the Baptist junior colleges, young women were graduating and were going to other institutions to complete their college work. Among them were not a few who could not find the work desired in Meredith College or in any other Baptist college for women, and on that account they were going in increasing numbers to the University of North Carolina and other institutions, where they could get the instruction they desired. With them often went their brothers and friends, who normally would attend Wake Forest. If Wake Forest College would admit them they would go there, since they desired to be in a Baptist college. Another consideration was that for the duration of the war the income from students’ fees would be materially lessened by the drafting for the armed services of those who would be regularly among the students of the College, and that this loss might be reduced by the fees of the young women from the junior colleges who would not go to Meredith College in any event.

In 1943 a board member “presented a compromise which allowed women to enter Wake Forest in any class (previously they had been admitted only at the junior and senior levels); recognized university status for Wake Forest, giving it the right to develop as it thought best and committed the convention to greater support of Wake Forest through funding of development programs.”

The admission of women to Wake Forest College, along with the end of the war, had some unforeseen complications. In spring 1946 the campus total came to 1,000 students. There wasn’t enough space to house all the students but the college and the town worked together to “provide lodgings of some kind for everyone.” Women stayed in Bostwick and Hunter dormitories, “even in the basements and attics.”

The Women’s Government Association and the Dean of Women were created in response to the acceptance of women. According to the 1964 handbook, “The WGA is you. The officers are elected by you and will represent you in all matters pertaining to the life of the women of Wake Forest College. The WGA is not merely a law-making organization, but a group created to help give a sense of unity to all the women of Wake Forest College. The WGA desires to help you, and in turn, needs your support to make your years here a success.”

The WGA created a handbook instructing coeds on how they should conduct themselves while at Wake Forest. Some of the rules include:

Coeds could not ride in cars or airplanes without the written permission of their parents. They were forbidden to enter any man’s room or apartment, and fraternity houses were strictly off limits. Women could not smoke on the streets, and they were not allowed to possess or use alcoholic beverages. Only Seniors were permitted to date every night of the week and, in that activity, were forbidden to go to the stadium, the athletic field, and certain dark areas of the grounds. 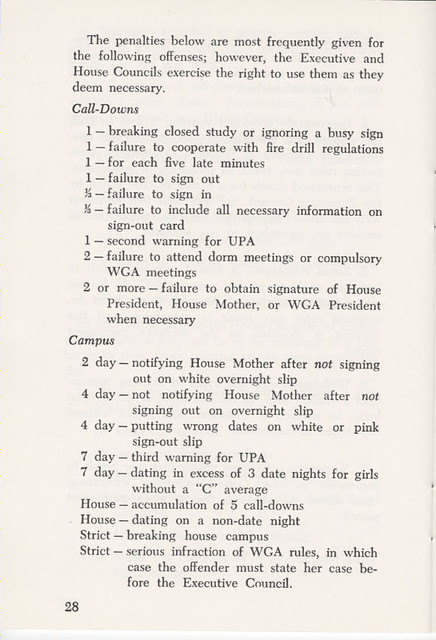 The handbooks have a variety of codes of conduct but here are some of the more interesting ones!

1953-1954: Dating in parked cars during the evening is not permitted. A date is considered being in the company of a boy more than fifteen minutes.

Blue jeans are for picnics and hikes—not to be worn on campus or in the parlors except for unusual circumstances. Permission to wear jeans on the campus may be obtained from any member of the council.

Hose are worn when going to Raleigh.

1957-1958: Bermuda shorts may be worn to the phone booths, drive-in movies, miniature golf course, through the small parlor when leaving or entering the dorm to and form a car, on picnics, swimming, in the recreation room, and to the Farmer’s Dairy Bar. These rules apply except on Sundays. Bermudas may be worn on Sundays with raincoats or skirts.

During serenades girls are asked to dress adequately and to be as courteous and considerate as possible. They are also asked to refrain from making excess noise whether they attend the serenade or not.

1962-1963: Second semester freshmen may go to the library any night, but must return to the dorm by 10:30. During this time she may go to the soda shop to get something, but may not sit down to eat it.

1965-1966: It’s a College rule that participation in or inciting a riot (and this includes panty raids) is subject to penalty.

1969-1970: You are asked to use good taste in what you wear both on and off campus. Sweat shirts and cut offs are discouraged! Slacks and shorts are not to be worn in administrative offices in Reynolda Hall, the Chapel, classes, or the Magnolia Room. Please do not wear slacks and shorts on the upper campus before two pm on Sundays.

1970-1971: Wake Forest students are expected to recognize that marijuana, LSD, and other psychedelic drugs are illegal…The University’s physicians, counselors, and chaplains are available to students who wish to discuss confidentially matters concerning drug use, subject to the legal limitations on confidential communication. 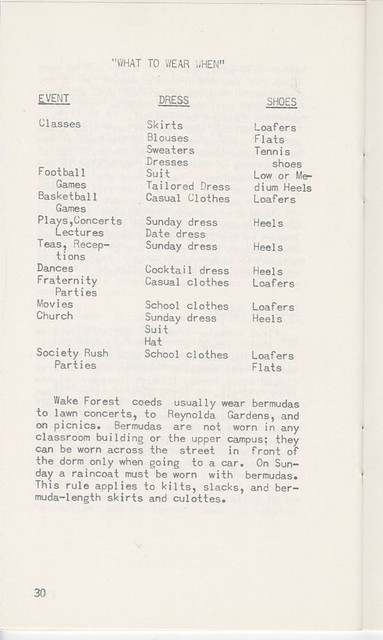 Naturally the inclusion of women on campus led to some unforeseen consequences. “Some of the campus hijinks over the years were coeducational in nature. The admission of women to Wake Forest had initiated an automatic rivalry which was sometimes friendly and on occasion somewhat sour.”

Some of these issues were explored publicly. One girl wrote into the OG&B saying: “It seems as if one must look like Liz Taylor to get a date. Have you boys ever realized that you don’t look like Clark Gable?…I believe that if given a chance the girls that aren’t so beautiful would prove cute enough for your adorable personalities…give the Wake Forest coeds a chance.” The newspaper received several responses from the male population in varying degrees of dissatisfaction. Winston-Salem also took notice to this ‘rivalry’. In 1966 a reporter for the Winston-Salem Journal surveyed the girls at 8 colleges and universities and reported that they found Wake Forest men to be “rude, crude, and unacceptable” and “retarded mashers.”  “Since admissions standards for men were lower, women tended to be more ambitious and intelligent, and they found it difficult to locate a marriageable man on the campus,” (History of Wake Forest IV, p.307-308). 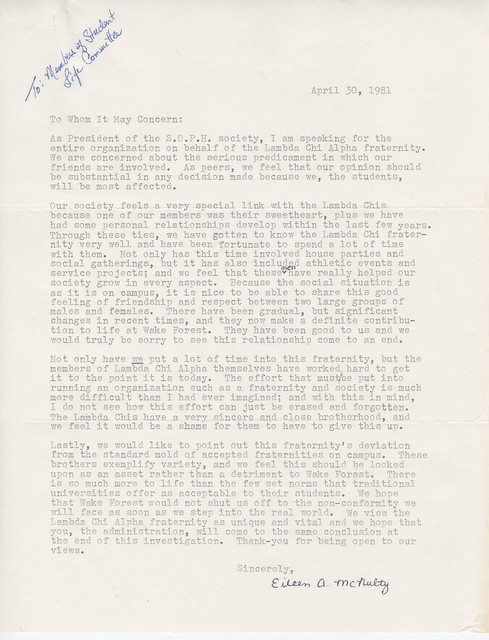 Another aspect the collection provides interesting insight into is the creation and upkeep of the societies.  The societies the collection offers information on includes the Fideles, Rigels, Petales, Les Soeurs, S.O.P.H., Thymes, Laurels, and Strings. “The societies themselves are primarily social in their function. They hope to offer the coed a broader scope of social living and at the same time to make some contribution to the life of the College and the community as well as to the lives of the society members.” 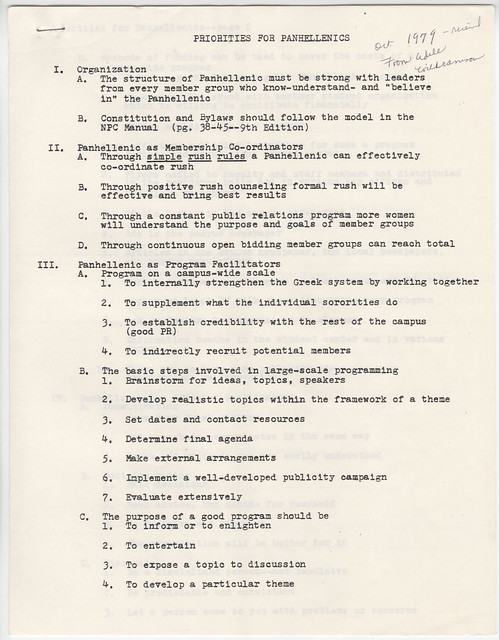 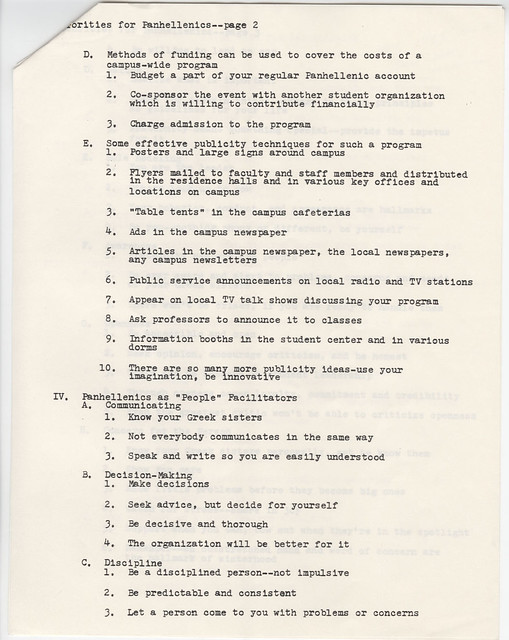 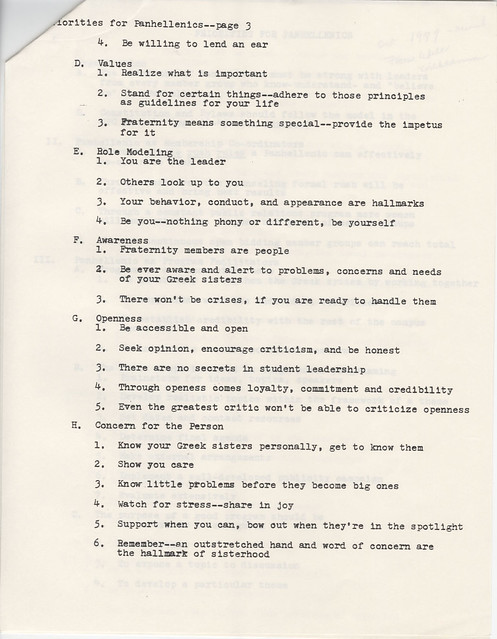 The Student Affairs Committee held open-hearings in order to properly evaluate how the societies were functioning- around campus and this is what they found.

It appears that the societies are most important for the girls during their freshman and sophomore years: in other words, they apparently fill a need for entering girls as they orient themselves to ready-made identity groups and make minor loyalties and friendships within the larger loyalty to Wake Forest College. According to our findings, senior girls rank them at the lower side of the list of factors most important in their collegiate career. Apparently there is already operating an unconscious phasing-out of society-identity in the lives of some students who are most mature, more self-reliant, more scholarly. Therefore, we recognize the role of societies in this maturing process of the individual student and in their contribution to the loyalty to the academic community, but we think that for those girls who tend to outgrown them, we would encourage a procedure whereby their membership could relapse into an honorary status. 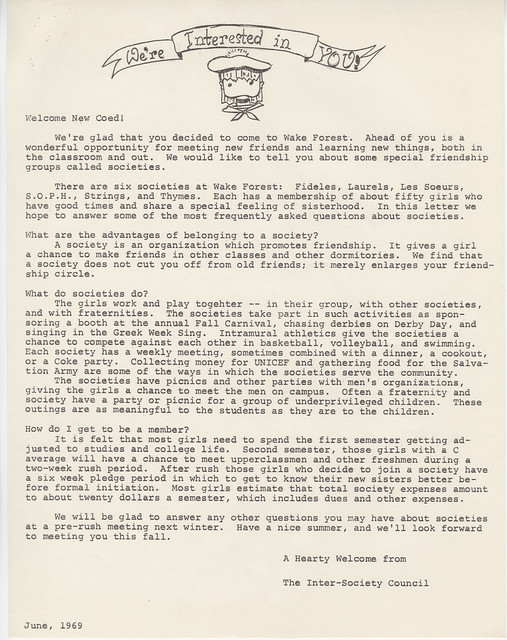 Overall The Deans Record Group, Dean of Women, and Women’s Government Association Collections offer an exemplary and unique inside look at the social lives of women at Wake Forest College. To access the collection students can view the finding aid to get a brief overview or make an appointment with Special Collection to view the collections.