What’s the oldest book in your collection?

This is the question most frequently asked by visitors to ZSR’s Special Collections. Our oldest book is a manuscript codex dating from around 1240. Created two centuries before the invention of printing with moveable type, this book is a handwritten copy of a commentary on the Biblical gospel books of Matthew and John. 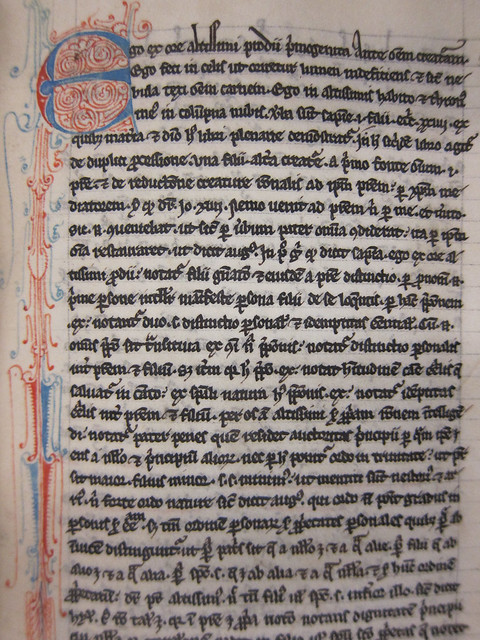 This volume has recently been the subject of study by medieval manuscript experts from some of our neighbor institutions, who have uncovered some interesting features.

Like the vast majority of European medieval manuscripts, the text of this book is in Latin. However, physical features of the manuscript suggest that it was made in France. The text is a copy of a scholarly commentary on the gospels of Matthew and John, perhaps part of Hugh of St. Cher‘s Postillae in Universa Biblia juxta Quadruplicem Sensum. 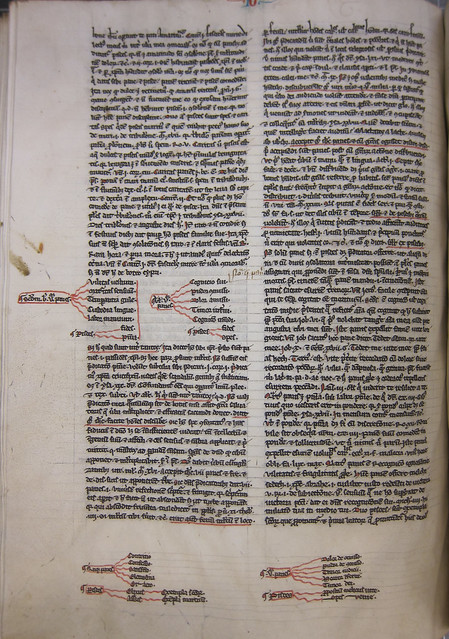 The text has many features typical of manuscripts of this era. It is written on parchment (also called vellum), a specially prepared animal skin. The running heads in blue and red indicate the chapter title on facing pages. Here  MA THS  indicates that this part of the text is about the gospel of Matthew.

The commentaries on these two gospel books were bound together in their current form much later, probably in the 17th or 18th century. They appear to be pieces of a larger work, and some small notations in the manuscript suggest a reason for this.

This note at the bottom of one leaf includes the word “pecia” along with numbers (in Roman numeral form). The manuscript contains other such markings, which suggest that it might have been part of a 13th century system for copying books for religious orders and for university faculty and students. This pecia system was developed at Italian and Parisian universities.

Copying texts by hand was obviously a time-consuming process, and the rise of European universities in the 12th century created an increased demand for texts. The pecia system addressed this concern by lending out standard texts in parts (pecia is Latin for piece) to students or to the clergy who made up the university faculties. The borrower would copy the part of the text himself– or hire a professional scribe if he could afford it– and then return the piece to the university stationer (bookseller) for the next part. This system allowed for faster and more efficient production than the lending of lengthy texts in their entirety.

In the universities, the pecia system was also an attempt at quality control. Transmission of manuscript texts was a process prone to error: when texts circulated and copies were made from copies, the effect was like a game of telephone. Errors were transmitted and multiplied to the extent that it was sometimes impossible to determine the correct version of a text. In the Paris universities, the stationers were provided with exemplars– texts vetted by university officials for accuracy– which they lent to scholars for copying. With everyone copying from the same exemplar text, errors were at least reduced (though certainly not eliminated).

The page below shows one common form of correction in a manuscript text. The marginal notation on the left, outlined in red, is text that was accidentally omitted from the column next to it. A symbol in the main text indicates to the reader where the insertion should go. 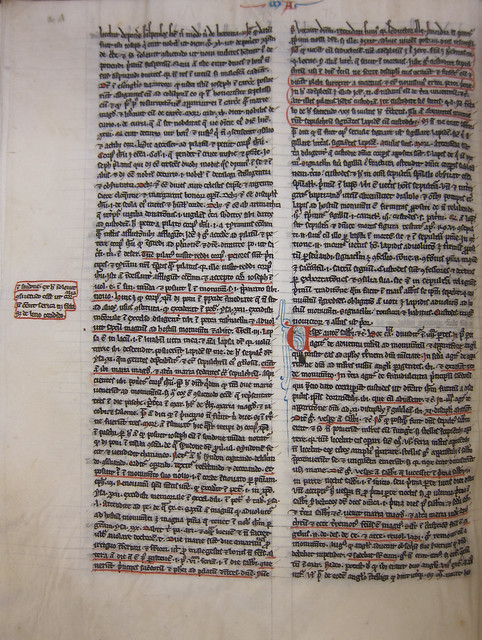 The excerpt below shows the opposite type of error. In the last line of the left column, some words are crossed out in red and underlined with a series of dots. This indicates text inserted by mistake, which the reader should ignore.

ZSR’s manuscript appears to be an exemplar– a master copy  that was lent out for reproduction. The handwriting is skilled enough that it was likely produced by a professional scribe, or at least a skilled copyist. But it is not a deluxe manuscript. Decoration is minimal, and the parchment on which it is written is not high quality. The image below shows one large tear that would have occurred as the skin was prepared. The tear was once sewn up with thread (now disintegrated), as indicated by the tiny holes along the sides. 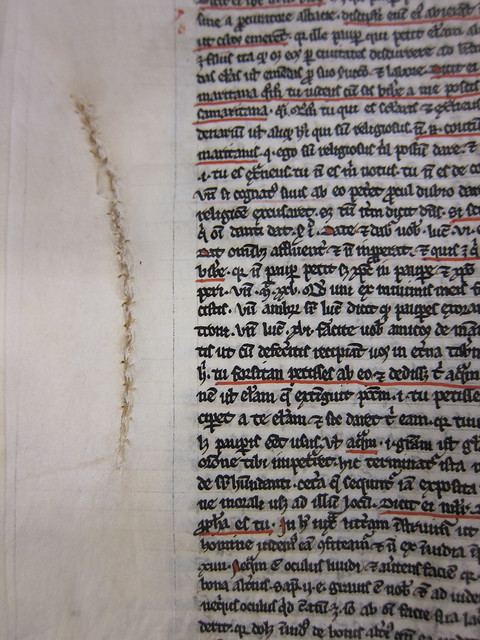 Smaller tears, holes, and discolorations exist throughout the text. Clearly this was a working textbook, not a luxury item.

At some point the manuscript traveled to England and became part of the library of the Tollemache family at Helminghon Hall in Suffolk. Later owners’ marks attest to the manuscript’s English provenance. Both probably date from the 16th or 17th century. One is by a Robart Emy. 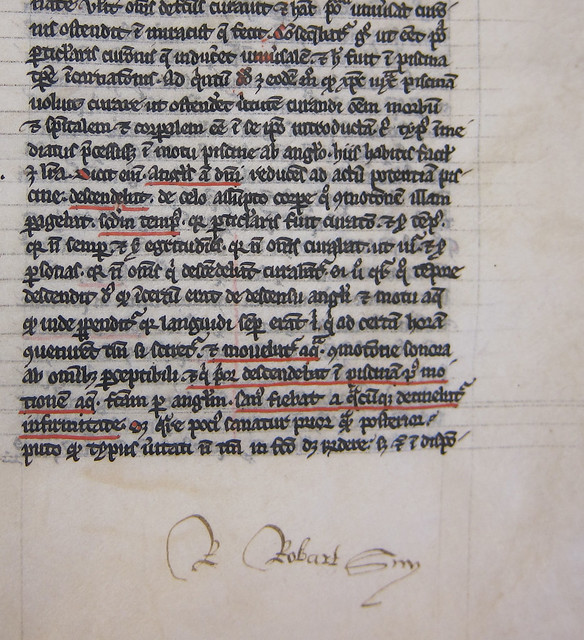 The other is one Thomas How[e], who asserts that he “own[es] this booke.” Thomas, who one suspects was a rather young student, has used the margins of several other pages for doodling and practicing his penmanship. 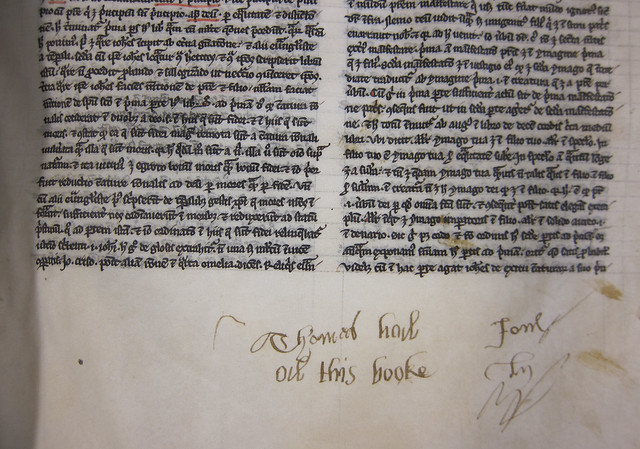 Wake Forest purchased this manuscript in 1967. Newspaper clipping in our files indicates that it was stolen in the 1970s by a part-time library employee and eventually resurfaced in the library at the College of William and Mary.

So our oldest book has led an exciting life. And it has many mysteries yet to be solved.

Special thanks to Dr. Jo Koster from Winthrop University for sharing her research on the manuscript.

5 Comments on ‘Manuscript commentary on the gospels of Matthew and John, ca. 1240’