by Megan Mulder on September 2, 2015 in Preservation

Pierre Bayle (1647-1706) was a French scholar and philosopher who spent most of his adult life as a Huguenot exile in the Netherlands. His most famous work was the Dictionnaire Historique et Critique, a multi-volume biographical encyclopedia that encompassed Bayle’s wide-ranging and often unorthodox ideas. His arguments, carried out largely in the footnotes of the Dictionnaire , gave a skeptical take on the religious and philosophical debates of the 17th century. Bayle’s work was a major influence on the Enlightenment thinkers of the 18th century (including fellow encyclopedist Denis Diderot), and the Dictionnaire became, in the words of one modern critic, “the philosophical blockbuster of all time” [Thomas M. Lennon, Reading Bayle (Toronto: U. of Toronto Press, 1999): 7].

The first edition of the Dictionnaire was published in Rotterdam in 1697; a revised and enlarged second edition appeared in 1702. There were seven more French editions published in the first half of the 18th century. It was translated into English, by Pierre Des Maizeaux, in 1706. Demand for the book was still high in 1734, when a new and improved edition of Des Maizeaux’s translation hit the book market.

ZSR Special Collections owns three editions of Bayle’s work, including the four-volume English translation of 1734. This copy of Mr. Bayle’s Historical and Critical Dictionary was well-used—to the point that it was falling apart.

ZSR’s Preservation Librarian, Craig Fansler, took on the job of reattaching the covers of the 1734 Dictionary and describes the process below.

For this preservation task, I was presented with five volumes. Each volume had detached cover boards. To begin, I had to re-attach each of the loose boards back onto each volume. I used tacketing to do this. Tacketing is a process in which you sew through the shoulder (outer edge) of the text-block into the outside edge of the cover board to make a physical attachment. Once you have sewn through the board a knot is tied and buried in the cover board. Following this process, a strip of Shikishu Japanese paper is applied over the broken joint. This completes the repairs to the inside of the book. 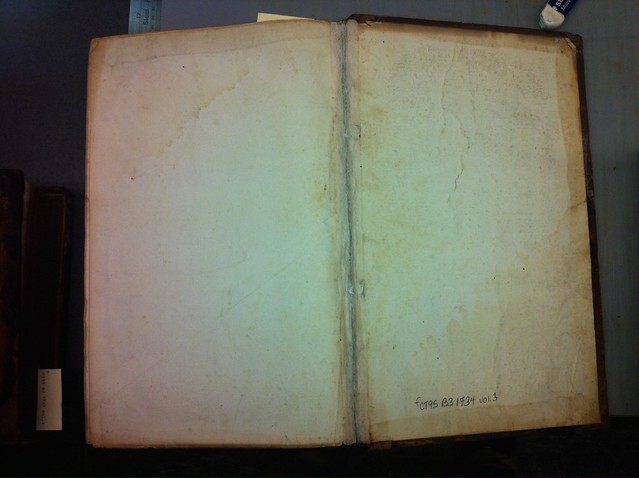 To repair the exterior of the book, the leather must be lifted off the board with a lifting knife. Often, after over 250 years, the leather is in bad shape: thin, brittle and damaged. This leather was all of these things, and was easy to lift. In addition, the leather appeared to have been exposed to heat or some caustic liquid because it was very discolored and damaged along the spine area. After the leather was lifted, I inserted a light brown Japanese paper (Moriki) to bridge the break along the hinge between the spine and the boards. 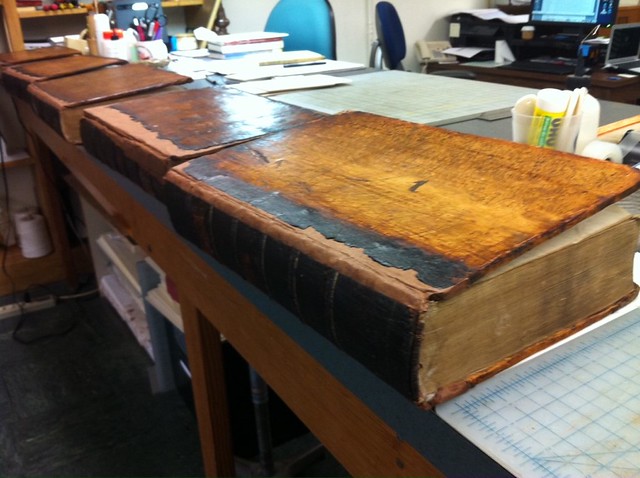 The final step in the repair process is toning the exterior paper to match the existing color of the spine and cover boards. To do this, I used acrylic paints. When the paint has dried and you are satisfied with the color match, a mixture of methycellulose and alcohol known as Klucel-G is applied to the entire exterior of the book. Klucel-G is a leather consolidant and does just that: it consolidates all the dry and powdered leather particles into a hard surface. This makes your repair look seamless and hopefully almost invisible. 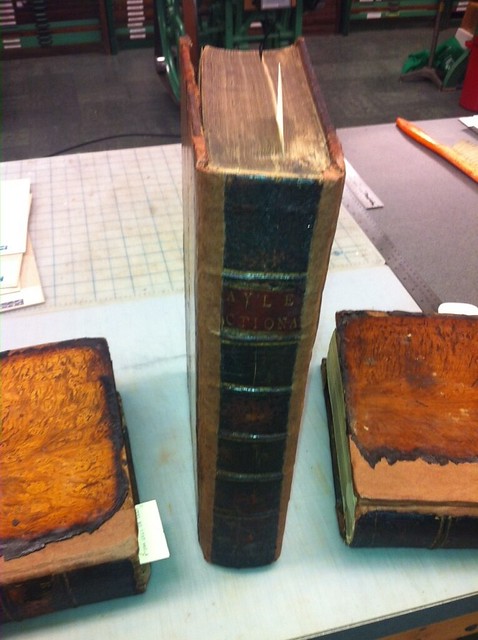