by Alana Mills on October 25, 2016 in Digital Projects

It’s almost time for Homecoming again here at Wake Forest University, and with all the festivities including the big game being just around the corner, ZSR Library’s Digital Scholarship Unit and Special Collections and Archives are proud to present our online exhibition, Coming Home to Mother, So Dear, a look at Homecoming celebrations from their inauguration in 1932 to 2008. 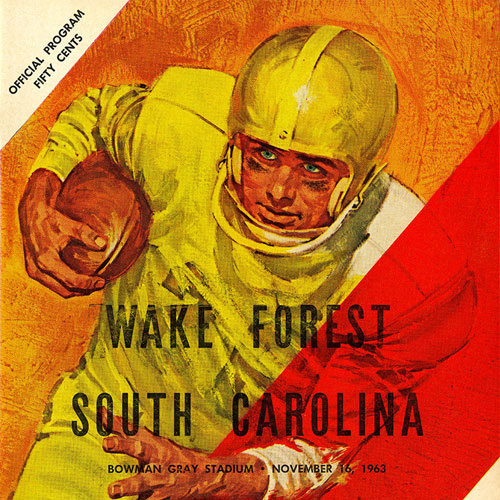 This exhibit showcases the variety of excitement from Homecoming over the span of nearly eight decades. The celebrations have grown over time, and what started out as a one-day affair has evolved to the weeklong event that we know today. The annual event has always centered around the return of alumni to our beloved campus. However—as documented in this exhibit—each year’s celebration also offers a unique insight into the overall climate of Wake Forest throughout the years, and many unexpected events have happened. From the crowning of two queens, to bonfires and carnivals, to the boycott of fraternity decorations, and a dog nominee for Homecoming King, this exhibit highlights the fact that there isn’t a dull moment in Wake Forest Homecoming’s history!

Included in the exhibition are images and articles primarily from the Howler yearbook and the Old Gold and Black student newspaper. The exhibit also includes football programs, local newspaper clippings and other photographs spanning throughout the years. This range of information helps to give a comprehensive idea of Homecoming, drawing information from the weeks before and after the actual event from news articles and gaining additional insight with highlights from the Howler released at the end of the year.

Work on this exhibit started in 2013, with the idea to create a Homecoming collection with materials for the reunion classes of that year’s homecoming. We have since expanded the exhibit to encompass every Homecoming that Wake Forest has celebrated up until 2008. Chelcie Juliet Rowell (ZSR’s Digital Initiatives Librarian) curated the 2013 exhibit, and ZSR student assistants played the leading role in expanding the exhibit under the guidance of both Chelcie and Melde Rutledge (ZSR’s Library Specialist for Digitization & Metadata).

Abby Brown and I were the first student assistants to work on the exhibit. As the project matured, more student assistants made significant contributions, including KaDeidra Baker, Shazia Siddiqui and Ayu Fatma, without whom this exhibit would not have been possible.

Before beginning this project, many people did not know much about the origins of Homecoming at Wake Forest, so a large part of our initial process was combing through issues of the Old Gold and Black to find information about the start of Homecoming. The first collection in the online exhibition helps to answer this question. It contains an article from November 21, 1930, commenting on the cancellation of the first scheduled “Home-coming.” A year later in the December 1931 issue of Wake Forest College Alumni News, it was announced that there were plans for a “Home Coming Day” for Fall 1932. This helped us to determine that the first official celebration was held in 1932. After locating these and other materials from the university’s earliest Homecomings, the exhibition grew in much the same way that Homecoming has expanded throughout the years.

Homecoming also occurred in conjunction with Society Day, an event that was the major draw for alumni previous to Homecoming. Society Day began in 1914. It was a celebration of the Philomathesian and Euzelian literary societies, but became less central to the College’s social and cultural life with the introduction of fraternities to the campus in 1922.

Not much information about Homecoming was readily available, so we searched diligently through documents to decipher the dates and opponents of the Homecoming football games for each year so that we could identify primary sources to include in the exhibit. Some sources that we pulled from were already digitally available, such as student newspapers and yearbooks and alumni magazines, but we edited them further to make content related to Homecoming stand out to viewers. For example, we highlighted articles and ads that appear within issues of the Old Gold and Black, and we cropped individual articles and photographs from full-length editions of the Howler. Other materials were not digitally available. We selected football programs that we were able to correspond to Homecoming games to be digitized and included in the exhibit.

After all the materials were gathered, we uploaded items to Biblioboard, which is the online platform used to create the exhibit. For each item, captions, descriptive text, and other metadata were added. Then the materials for each year’s Homecoming celebration were placed within the corresponding collection in the exhibit.

Creating this exhibition has been such a rewarding journey for everyone involved with the project, and it is amazing to see all of our hard work come to fruition in this online exhibition. From discovering the initial Homecoming event to sharing the excitement of past years, it has been a fulfilling process to compile this comprehensive collection on the history of Homecoming at Wake Forest University. We hope you enjoy diving into these materials as much as we have!