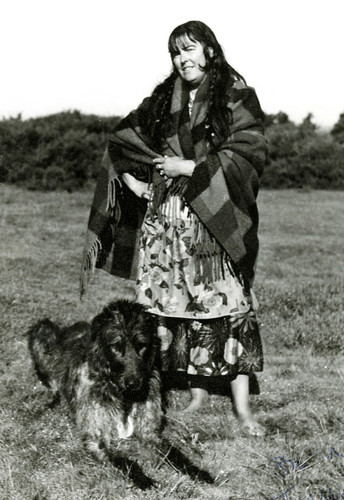 Undated photo of Juanita Casey from the Dolmen Press Collection

Juanita Casey was born under the name Joy Barlow in 1925 to what she referred to as “Traveling People.” Her father, Jobey Smith, was from the English Romany group and her mother, Annie Maloney, was from the Irish Travelers. Juanita’s mother died when she was born. Her father abandoned her a year later and she was raised by two man she called her “uncles” although they were not related. From this beginning, Juanita Casey became a well known author, artist and horse (and zebra) breeder. 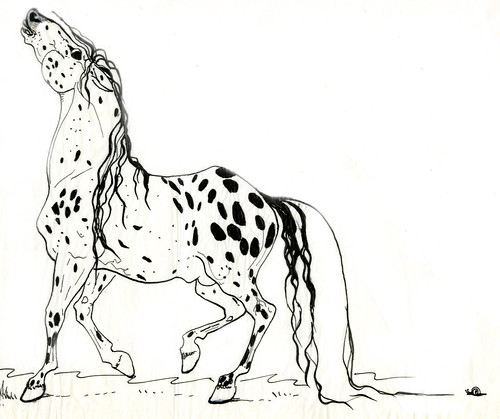 Ink drawing by Juanita Casey from the Dolmen Press Collection

Juanita’s love for animals and horses especially came about because one of her uncles bought and trained circus animals. Juanita was also educated in private schools off and on during her youth, courtesy of another uncle.

Her first marriage was at 16 to John Fisher, a Dorset farmer and sailor, with whom she had a son, William (b.1947). Juanita traveled with Fisher on a number of his boats along the Irish coast. After William’s birth, Juanita met and established a relationship with regional artist, Sven Berlin. They lived and worked in a local artist’s colony in St. Ives. Juanita has a son, Jasper, with Berlin and they were married in 1953. 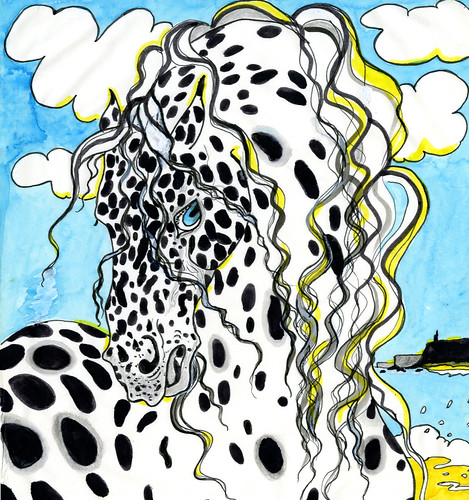 Color illustration by Juanita Casey from the Dolmen Press Collection

Juanita also lived in and around gypsy groups throughout her life-often working with horses. She inherited some money and began breeding and training horses on her farm (this included a horse belonging to Queen Elizabeth). Incredibly, Juanita also attempted to breed a horse and a zebra to create a “zorse.”

In 1963, Juanita was divorced from Berlin and left England for Ireland with Fergus Casey. In Ireland, Juanita began to write. Her earliest writing was Hath The Rain a Father? (1966) which was a collection of short stories. Her work with the Dolmen Press began with Horse by the River (1968) which was a collection of verse. In 1971, Juanita published The Horse of Selene with the Dolmen Press. 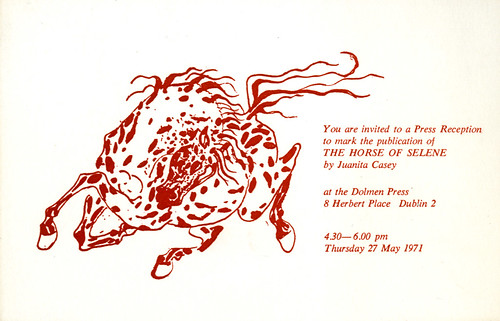 Invitation from the Opening for The Horse of Selene, 1971 from the Dolmen Press Collection

The novel, The Horse of Selene, gained a cult following in the UK and the US. The novel explored the social changes and freedom of youth in the 1960’s. The Circus was published by The Dolmen Press in 1974 and told the story of an Irish girl whose life was focused around a circus (much as Casey’s life had revolved around the circus since the age of 13). Juanita Casey lived in Okehampton, Devon until her death on October 24, 2012.

Other works by Juanita Casey: