This year, in lieu of a Spring Break week, WFU students are getting a few days off here and there. We encourage our student workers (and ourselves!) to take breaks when needed, especially this year with the unusual schedule. Junior Immanuel Eggers has written about what he’s been doing with his free time – amateur geology, also known by the very cool nickname rockhounding. As the weather warms up, it’s a great time to take to the hills for gem hunting. Tell us about it, Manny!

During lockdown, when it’s easy to get cooped up indoors, it can be refreshing to find excitement in nature’s hidden gems. As a newcomer to North Carolina, I became infatuated with the local geological diversity. On walks around the Wake Forest campus and Reynolda trail, I often find myself stopping to collect an especially reflective piece of mica that caught my eye. I began dedicating more time to understanding how to find and identify North Carolina’s rocks and minerals. As a result, I’ve learned about our state’s geography, since rock identification can be more difficult than a simple Google search. [Archivist note: something archives and geology have in common!]

North Carolina’s natural history lends itself to a prolific geography. Until roughly 500 million years ago, the state was submerged in the Atlantic Ocean. As rock, clay, and sediment washed up on the shores of this billion-year-old stone basin, the Appalachian Mountains began to form and earth enriched with pyrite, iron and copper from the seafloor was washed up and deposited. Magma deposits and volcanoes in Virginia and the Carolinas introduced high-purity gems and minerals like feldspar (including emerald), quartz, mica, and granite.

About 370 million years ago, a northern chunk of the African continent collided with the coast. This collision helped form the Appalachian Mountains over the next 100 years, depositing older rocks onto the younger North American continent. Streams helped carve out valleys in what’s now western North Carolina, filling the ocean with Appalachian rocks. Over a couple hundred million years, this helped create sedimentary rock deposits, such as limestone, marble, coal, among many others. During what’s known as the Appalachian Revolution, the once Himalayas-sized Mountains sank, mixing ancient crystallized minerals with these newly formed rocks.

All this means North Carolina is home to a renowned diversity of archaeological curiosities, including over 300 gems and minerals. Many of them are variants of quartz, feldspar, and limestone, but also all four precious gemstones (diamonds, ruby, sapphire, and the state gemstone, emerald). A comprehensive gem and mineral guide for the state, by county, shows that as you head east, marine fossils can be found in rivers and on coasts: sharks teeth, whale bones, shells galore. More modern artifacts live in Winston-Salem’s Washington Park, such as marbles, old cosmetic and food glass, and construction rocks and bricks.

One way to collect some of these goodies is to find a creek or a rockhounding mine. Creeks do some of the mining by carving out hundreds of millions of years of rocks, allowing you to scavenge or dig up more interesting finds. Last week, I went to Emerald Hollow Mine in Hiddenite, Alexander County, to check out their creek and gem sluicing. Until this point, the majority of my rock collection was acquired from various creeks around the broader Winston-Salem area. Here are some of the beautiful minerals I acquired, and hopefully these can help you all identify future rockhounds. 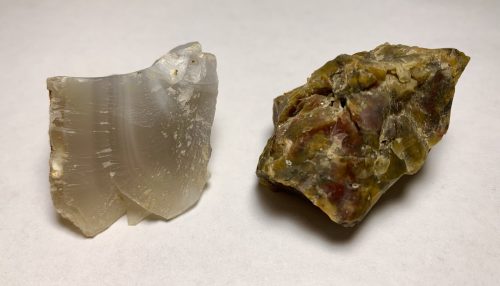 Agate is a semiprecious stone. Agate varies in color and shape and instead is identified by the Wonka’s Gobstopper-like banding on the inside, developed by quick cooling of magma. These rocks can look lackluster at first, but polish smoothly and can expose beautiful multicolored stripes. 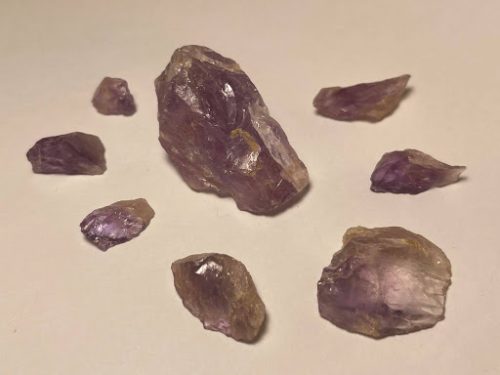 Amethyst is a semiprecious quartz variant with a distinctive purple color. North Carolina is a hotspot for amethyst due to our soil’s high content of crystal and iron. 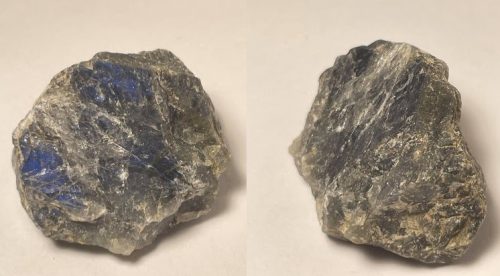 Cordierite is an igneous mineral, typically made as bands deposited onto other igneous rocks, known for its pleochroic, or “color shifting” effect. It’s commonly found in clay and can be dark grey to reflective blue. Resistant to high temperatures, it has some commercial uses, but otherwise it’s a cool ornamental piece.  The pictures above are the same piece of cordierite. 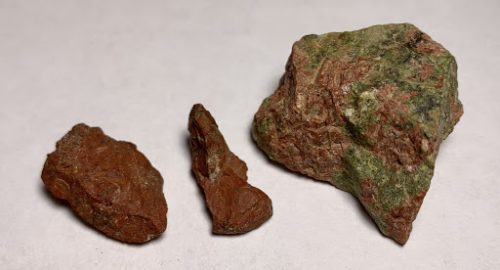 Jasper has a tight crystalline structure, making it a strong and opaque stone. The workers at Emerald Hollow Mine called it “nature’s brick.” Depending on which minerals and soil types the jasper forms in, it garners different characteristics. Jasper is prone to banding and “imperfections,” which can be exposed with smoothing. The red and green jasper above has some visible spots and banding. 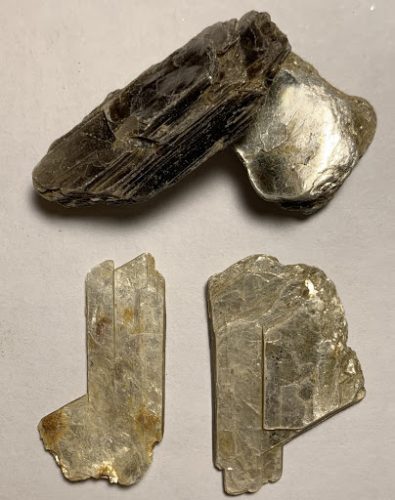 Mica is an aluminum-heavy mineral called a phyllosilicate. It forms in sheets, allowing it to coat or form with any type of rock. It’s distinctively reflective and can break apart (in rock lingo: cleaves) in sheets. Mica has industrial uses such as electrical engineering, glass working, and cosmetics like highlighters. 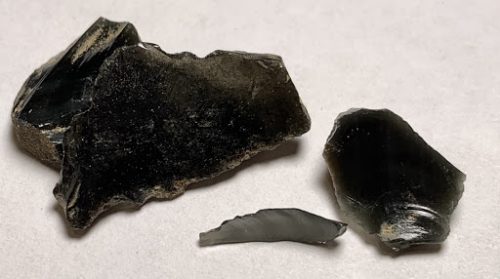 Obsidian is an igneous rock, known as a “natural glass” because of its shine and smooth surface. It is formed from the quick-cooling lava, making it stronger than glass but still fragile (and sharp!) It is black but can be banded with yellows, reds, and greens. It is sometimes used as a semiprecious gemstone. 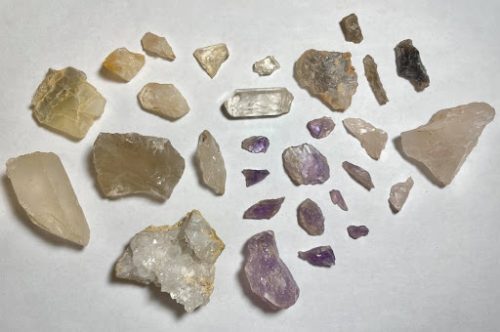 Quartz is a diverse mineral, in its variations and its uses. It is prone to pick up mineral impurities, which can decrease the mineral’s shop quality or transform it into another mineral.  The popular clear variant is crystal quartz, but variations include smoky quartz, rose quartz, amethyst, and citrite. Quartz variants can also be found inside of geodes as clusters.

The next time you find yourself walking outside, look out for some of these rocks and minerals. No matter where you find yourself venturing in this state, you can find fascinating minerals and artifacts to take home with you. I have much more to learn about rockhounding, and hope this ignites interest in some of you.

Thank you for the geology history and identification primer, Manny! Looking forward to seeing what I can spot on my next long walk.

4 Comments on ‘What Are You Working On, Spring Edition: A Crash Course in NC (Semi)Precious Rockhounding’