by Carrie Johnston on December 4, 2017 in Professional Development

Slightly exhausted from last year’s large conferences, I decided that attending and presenting at smaller conferences would be the way to go this year. My choices did not disappoint!

I presented at BH & DH (or Book History and Digital Humanities), held by the Center for the History of Print and Digital Culture at the University of Wisconsin-Madison. Along with Sylvia Miller of the Franklin Humanities Institute at Duke and David Phillips, a WGS faculty member here at Wake, I organized a panel, “Reshaping Publishing: Collaborative Multimodal Approaches to the Humanities Monograph 2.0.” Sylvia, David, and I presented ideas about ways to publish and circulate scholarly research that exceeds the boundaries of the traditional monograph. The panel was well-attended, and we had a very engaging conversation with the audience after our presentations.

I also enjoyed the panel, “Digitizing the Materiality and Structure of Books,” in which Fenella France from the Library of Congress discussed the hyperspectral imaging technology her team uses to recover lost histories through the preservation of fragile and priceless documents such as the Declaration of Independence and the Gettysburg Address. Through hyperspectral imaging, they have been able to uncover revisions in the Declaration of Independence, such as the erasure of “fellow subjects” in favor of “fellow citizens.” Fenella and her team were also able to recover what are most likely Abraham Lincoln’s fingerprints on the back of the Gettysburg Address.

The keynote speaker, Matthew Kirschenbaum of the University of Maryland’s Institute of Technology in the Humanities, gave an excellent talk, “Post Scripts: Graphologies of Bookmaking After Adobe.” Kirschenbaum discussed the “black box” of contemporary book making due to the almost-universal use of the proprietary software, Adobe InDesign, in book publishing. We forget, he pointed out, that the books in our hands would not exist without a global infrastructure, and that books are themselves a fully-integrated global commodity. What does this mean for bibliographers, he asked. For book historians?

There were many big takeaways from his talk, all of which I’m still mulling over, but the thing that has most tangibly stuck with me is that the physical book makes invisible the global, yet extremely segregated and uneven, production economies of book production.

I was also excited to take a look at U of Wisconsin’s RADD lab (Recovering Analog and Digital Data), and it was, in fact, pretty rad. I’ll let the pictures of all the old media (and working old-media readers) speak for themselves! 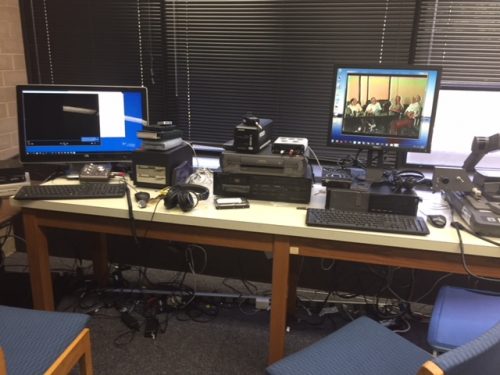 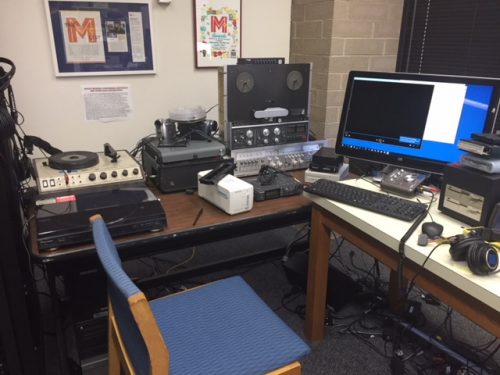 I returned from the conference brimming with new ideas, many of which are relevant to Wake Forest faculty who are less eager to jump into digital humanities, and more likely to respond to this new methodology when it is put in the context of book history and material cultural studies.

Earlier in September, I attended a symposium of that other ALA, the American Literature Association. Much smaller than their annual conference, this symposium, organized under the theme, “Regionalism and Place in American Literature,” was a perfect venue for thinking about my current book project on literary production and tourism in the American Southwest. It was also an opportunity to advertise my most recent publication, a special issue of Studies in the Novel, “Gender and the Cultural Preoccupations of the American West.” I co-edited the issue and also contributed an article on Leslie Marmon Silko’s Ceremony. It was great meeting up with some of the other authors who contributed to the issue, and getting feedback from others who had gotten a chance to read the special issue.

The conference was held in New Orleans, so it was a homecoming for this Louisiana girl. I spent the days running from panel to panel and the evenings catching up with professors from my Tulane days.

I particularly enjoyed the opening plenary session, in which the speakers addressed the questions, “Why Regionalism? Why Now?” June Howard, American Culture faculty at the University of Michigan, made the important point that the region is not contained by the nation, but is rather an interruption to or a contestation of the habits of mind that contribute to nationalist ideology. I found this particularly compelling in today’s divided political and social landscape, and one of the most useful ways to think about ways that the local can disrupt what’s happening on a national level–in literature and in our lived experiences.

I’m writing this blog post with a better-late-than-never mentality, since both of these conferences took place in September and I’m terribly tardy in sharing. It’s been a busy semester, but these events were a great way to kick it off. Thank you for reading!

8 Comments on ‘Book History & Digital Humanities, and that *other* ALA’