by Ellen Makaravage on July 21, 2017 in Professional Development

My first visit to Chicago was 40 years ago on an excursion with the University of Michigan-Flint History Club.  I was a student in Ann Arbor but my friend talked them into taking me along.  My friend and I often found ourselves referring to a tourist map trying to figure out the “L” and getting around the city. People would stop and ask if they could help us find something and I was impressed with their helpfulness. So in 2017 I was able to attend ALA and would occasionally find myself looking at a map on my phone to figure out where I was going. People stopped and asked me if they could help us find something. I’m still impressed. I love exploring big cities and Chicago is the BEST.

My conference started off on Friday at Library Con sponsored by Penguin Random House where I learned how to break into creating graphic novels from a panel of authors. (in case I decide I want a career change) At the time I had no idea that ZSR was looking into increasing our graphic novel holdings. These folks had found their nerd herd and it was fun to be there.

The opening session with outgoing president, Julie Todaro and Mayor Rahm Emanuel was predictably inspiring and then we were off to explore a couple of the receptions held by vendors.

Kanopy held a reception at the Art Institute which I attended in hopes of getting an update on any developments in video streaming and getting a look at the art but there was no information and very little art in the reception area.  OCLC was holding their 50th Anniversary reception at the Adler Planetarium which is a beautiful building, 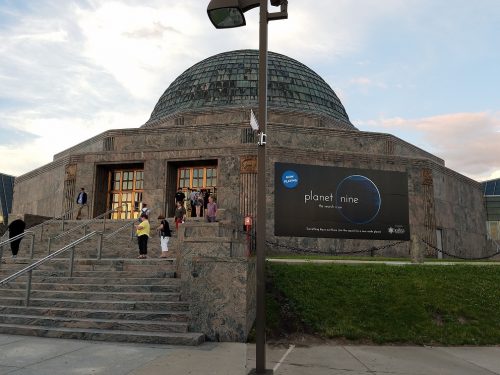 with a beautiful view, 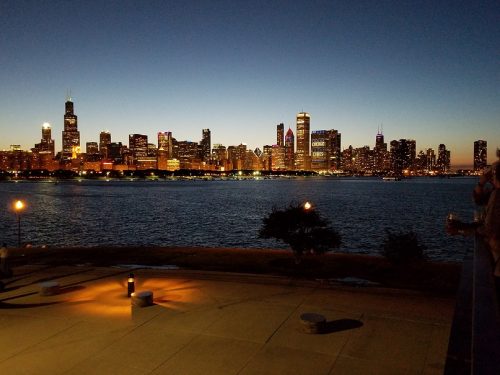 and some very cool stuff. 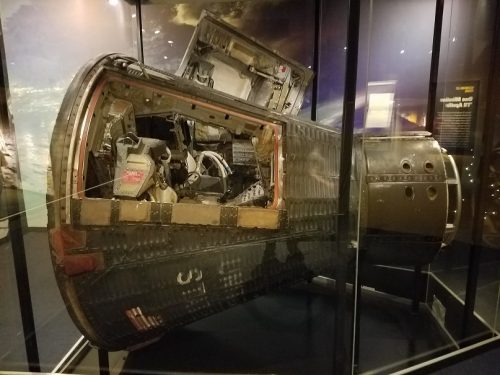 The next day I attended the Intellectual Freedom and Open Access: Working toward a common goal? session wanting to learn more about Open Access but it turned out to be an insightful program on systemic exclusion of marginalized peoples in publishing.

Some of the speakers’ points that I found interesting included:

Most of the rest of my sessions focused on interlibrary loan (ILL) and copyright. On Saturday morning I attended an ILL Discussion Group (RUSA Stars).  The panelists looked at trends in ILL including:

“I Am Not a Lawyer: Providing Copyright Services in the Library” was a panel session that was helpful in learning how to develop the correct approach to advising faculty and students about copyright compliance. There were several reminders that our role is as an adviser. Even telling them that they aren’t in compliance is legal advice. We can give them information to minimize risk but the fair use decision is ultimately theirs. However, if the advice is too conservative, they may pay copyright fees unnecessarily or limit their exercise of fair use. Advertising to let the faculty and students know where to go can encourage their participation in copyright compliance.

Another topic covered was social media outreach. The speaker emphasized that the purpose of social media is to solicit input and react to it. It’s the electronic equivalent of small talk. America learned the power of social media last November. She also stated that its purpose is “not to blurt out whatever is on your mind.” (the crowd loved that one) You should love the people that are already interested and keep their interest alive. It is important, “It can make you the President.”

My sister (Chicago roommate and librarian from MI) and I took some tourist time and attended a performance of Aladdin at the Cadillac Palace Theater which was fabulous (both the show and the building) and another evening we took a river and lake cruise with a very informative commentary on Chicago architecture and some beautiful views. 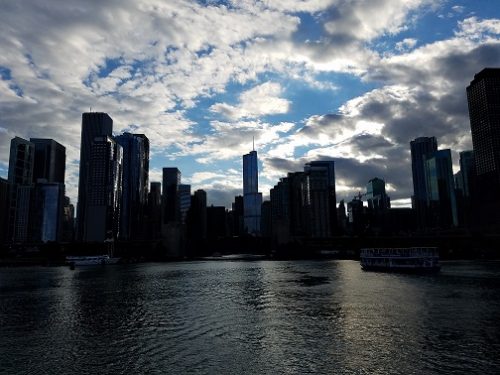 Then to wrap things up I was able to see the closing session with Hillary Clinton. As we were waiting for the program to begin there was a feeling in the room like a rock concert was about to begin. When the background music started playing, We Are Family, the audience was on their feet and singing. 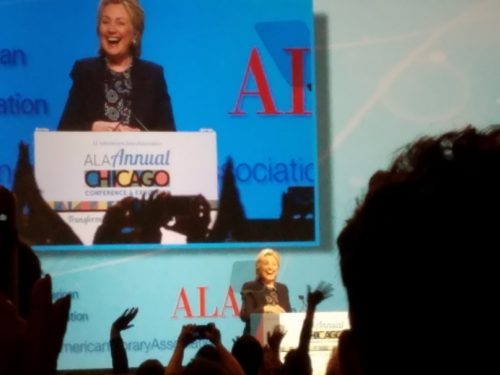 Secretary Clinton asked us to persist and offered three reason we need libraries:

It was a great way to close out the conference and a great visit to a great city.