by Kaeley McMahan on July 17, 2017 in Professional Development

The 2017 edition of the American Theological Library Conference was held in Atlanta, June 14-17.  In addition to attending conference sessions and reconnecting with colleagues from across the US, I had two official roles this year.  I ended my term as Secretary of the Public Services Interest Group by taking minutes of our panel session, “The (Virtual) Human Touch: Promoting the Spirit of Inquiry Through (Distance) Research.”  I also presented a poster on the collaboration it took to create the Biblical Studies Reference and Commentary Shelves location in the Reference Department, “Making Space for Research.”  I had some great discussions with several librarians who are interested in trying something similar in their own Reference areas.  After I returned from the conference, I was contacted by an ATLA staff member who saw my poster and wants to feature it when she attends a sister conference for Australian and New Zealand theological libraries in a few months!  A big thanks to Meghan, Sarah, and Craig for help in designing and formatting the poster, and to everyone who was involved with a project that has helped our Divinity students do their work more effectively and efficiently! 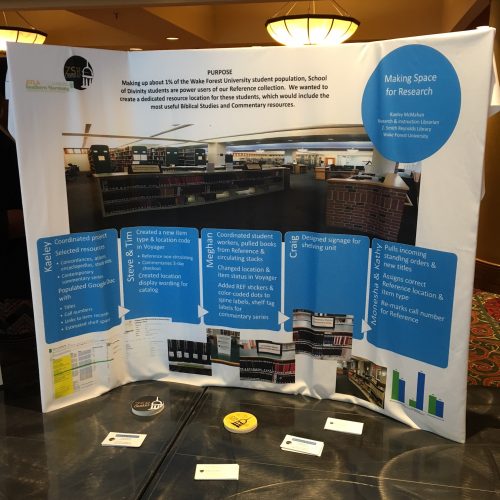 ATLA always has great plenary session speakers, and this year was no exception:

Earlier this spring, ITHAKA S+R published one of their discipline-focused scholar surveys, this one looking at the research habits of religious studies scholars.  As you can imagine, this survey was of great interest to ATLA members, so there were several sessions that covered the results of the survey, and many of the other sessions I attended echoed some of the findings that had been discussed.  The report named three major themes that came out of their discussions with researchers, and they gave specific recommendations for each of these areas:

The conference also included several sessions that touched on the ACRL Information Literacy Framework, as I expect there will be for a long time as instruction librarians learn to incorporate the concepts into our instruction and course design.  The session that I found to be most useful to my own instruction work was Out with the Old, In with the New: Practical Strategies for Using the New ACRL Framework.  One of the presenters described how he used the threshold concept “Scholarship as a Conversation” as the primary frame around which he structured his course.  He incorporated the other frames as well, but this one was the focus.  In thinking about the structure of my course, I tend to emphasize this frame anyway, so I was glad to get a better vocabulary with which to articulate this idea to students.