by Molly Keener on April 30, 2018 in Professional Development

April found me participating in two scholarly communication meetings that were focused on intersections: OER+Scholarly Communication, a grant-funded project to begin work on an all-about-scholcomm OER for LIS programs, hosted by NCSU at the Hunt Library in Raleigh on April 8 & 9; and the ACRL Intersections of Scholarly Communication and Information Literacy Road Show, hosted by ASERL, Emory, and Georgia Tech in Atlanta on April 26. At both events, I knew people in the room, many quite well, as I’ve been working in scholcomm for 11+ years now. But happily, there were more new-to-me people to get to know, including many who have come into the field more recently than I.

At both events, I was struck by two points:

I realize that, on the surface, both of these are rather obvious. But I want to unpack them both a bit – in reverse order – to explain why they struck such a chord.

The infusion of scholcomm through academe and the work of our scholars has always been recognized, but understanding it as also being infused in academic librarianship has not. In the early days (“back in my day…” ugh, I’m sounding old!), scholcomm was either the shiny new area that was intentionally set apart, or it was this strange new area that was…yep, intentionally set apart. Whether shiny or strange, scholcomm was often set apart – it was its own thing (or, it was part of a bunch of other things…an add-on thing, which isn’t any better). Now, though, the truth that’s been there all along is starting to be acknowledged: scholarly communication is not a separate, discrete area of librarianship, or of academic life; rather, it is a fundamental core tenet to our profession. 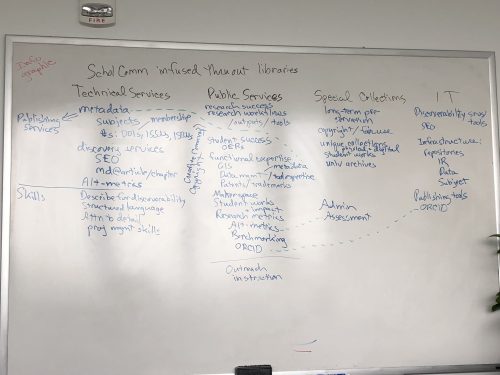 Many scholcomm librarians, me included, have relied on their liaison librarian colleagues to help connect faculty to their areas of expertise, and amplify their advocacy efforts around open access and author rights. Many scholcomm librarians, again me included, have relied on their reference and instruction librarian colleagues to introduce scholarly communication issues to the undergraduate classroom. Without explicitly calling attention, we have been acting on this tenet, infusing our scholcomm knowledge in our work with our colleagues for years. During those years, there were increasing intersections between scholcomm and other areas of librarianship, from collaborations around data management to digital humanities to collection development decisions. Now, some of the first to hold dedicated scholcomm positions are moving into administrative positions, and the informal infusion of scholcomm is beginning to be formalized. Regrettably, though, many LIS programs still do not formally address scholcomm in the curriculum. Only a handful of programs offer courses that address scholcomm, and most give only a class session or two to the topic. While all professional education programs have their failings, and you never learn everything you need to know during graduate school, there is growing consensus that LIS programs need to be teaching soon-to-be librarians about scholarly communication. And who better than we to help determine what they need to know? Oh, and whaddayaknow, we happen to have expertise in all things open, hence OER+ScholComm. This project is at the early stages, but I am optimistic that it will rock.

Coming back to my first point about how my move into an administrative role has shifted my thinking about scholcomm, this has been a gradual, evolving shift that predated my promotion to a director-level position, although it has certainly expanded since. But what really brought it home to me at last week’s ACRL Intersections Road Show was being asked to move to the “admins’ table” for the workshop. I was one of five admins in the room to make the move, and physically moving across the room, away from Kathy and Kaeley, to join my fellow admins was a mark of distinction that framed the day in a different way for us. We found that the workshop exercises were not necessarily appropriate for our work (e.g., we don’t write learning outcomes for meetings with university administrators when advocating for scholcomm initiatives on campus…although perhaps we should!). 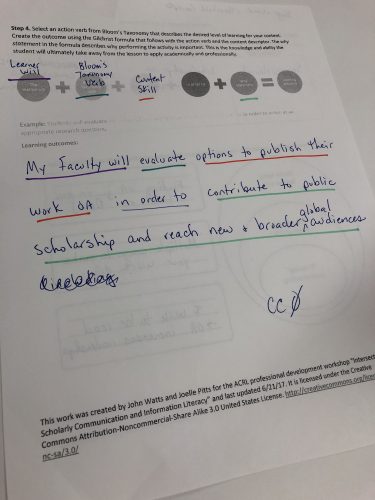 Yet it was helpful to spend the day with admins from other libraries, both public and private, to hear their perspectives, to share my own experiences, and to continue to cultivate my broadening concept of scholarly communication at a campus level. It reaffirmed what I know to be true: it’s not just me, or the Digital Initiatives & Scholarly Communication team, or even all of us at ZSR who are the future of scholcomm at Wake Forest; it’s in the intersections, where we come together with our campus community and our profession at large, to advocate and advance the tenets of scholarly communication that are the future. And that’s mighty exciting to me!