by Thomas Dowling on November 13, 2018 in Professional Development

Minneapolis in November. There is a quiet monochromatic loveliness to a prairie city under one of the season’s first snowfalls. Photo taken from indoors because it was 14 freakin’ degrees.

This is a difficult report to write in several ways. First, this may have been the last LITA Forum, or at least the last one of its kind. This is a meeting I have attended most years since 2001, in cities from Norfolk to San Jose, and Fort Worth to Minneapolis. I chaired the Forum planning committee one year, served on it another, and was ex officio on two others. I’ve presented at Forum a number of times. With LITA looking to merge with ALCTS and LLAMA next year, it is very unlikely that Forum 2019 can happen – everyone will be busy either with the work following a Yes vote or the consequences of a No vote. After that, no one can say. Small conferences are having a harder and harder time finding both venues and sponsors (and attendees, to some extent).

The meeting was bookended by two fantastic, provocative, challenging keynotes, and punctuated by the on-stage implosion of a major digital library organization, filled in with a smaller number of sage-on-the-stage presentations and a larger number of group conversations and shorter tech presentations with focused discussions. (Like mine, for instance. Ask me offline.)

Note to meeting organizers: “Let’s go around the room, have everyone introduce themselves, and say how they’re involved with [Topic X]” can work well in groups of, say, 12 or fewer. Not in groups of 35. Just saying.

Opening Keynote: Nancy Sims, known to many as @CopyrightLibn and author of the Copyright Librarian blog, began her talk with a description of some of the progressive principles that have shaped Minnesota over the years, and how they align with library principles, and then ran us smack into a slide that said, “Library Technology Does Not Reflect Library Values.” (Quibble: I would say that library technology policy often does not reflect those values. The tech itself was mostly created to extend those values to additional users and/or retain them through times of shrinking resources.) Sims, who is both a librarian and a lawyer, challenged libraries to stop selling out our users to our vendors, face up to the hiring practices that defeat our own hopes for a more diverse profession, and stop being so polite about being underfunded and under-resourced. 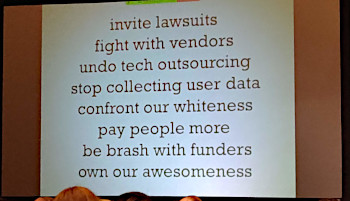 Opening Keynote in One Slide

How Not to Give a Presentation When Your Organization Is Imploding: On Friday, DPLA fired its six metadata librarians. On Saturday, the head of DPLA was scheduled to speak at a library technology conference and apparently thought he could offer up a cookie cutter talk on how much technology and politics have changed since DPLA started in 2010, because… AI! E-Books! The 2016 Election! Be more like a vendor! Nothing to see here, move along please!

Then there was time for questions. Did I mention this talk was streamed live?

Disclaimer: I was three rooms down listening to sessions on linked data (sorry, but I’m still looking for the killer app here) and smart maps at Houston Public Libraries, but there couldn’t have been more discussion about this session if a trainload of circus animals had stampeded through the room.

Seriously, watch the recording (feel free to jump to the 31 minute mark when the Q&A dumpster fire starts), and read the Twitter comments (search “#litaforum @dpla”). The most positive spin possible for this situation is that DPLA came up hard against the end of an unsustainable funding model, and terminated librarians without a having/articulating a plan for continuing the work those people were doing on behalf of the DPLA mission. Any less positive spin is left as an exercise for the reader.

Closing Keynote: If the DPLA fiasco lit a match, closing speaker Dorothea Salo burned the place down. This was a powerful and moving talk that served as a pretty stinging indictment of a lot of library leadership failings we may take for granted through sheer repetition. Salo teaches in the University of Wisconsin I-School and has become a safe adviser for her own former students and other new librarians getting started in the profession, and she sees the ways that this profession turns on some of its own most gifted new members. The idea of people and situations being safe permeated a lot of this talk, with pointed references to the DPLA situation. Almost by definition, many of the people in our profession who are in their first positions are in the least safe positions. And here’s what we do to many of them:

Library job ads. They ask for a laundry list of skills, including supervisory experience for jobs that don’t supervise anyone, unrealistic expectations for previous experience, and over-specific skill sets; they don’t pay competitive salaries; in the tech area they often describe new positions for new initiatives that are under-resourced from the beginning; and are clearly recipes for failure. Welcome to your first librarian position.

Not surprisingly, these unsafe positions drive away a lot of gifted new professionals, and scare away others who are least able to afford the risks they present. Salo presents this as a major factor that de-diversifies libraries, starting even before there is an applicant pool. In the tech sector, the racial and class non-diversity of libraries is frequently joined by a nasty streak of sexism and homophobia.

Cut to an Ithaka report that quotes library leaders saying they have trouble hanging on to good people. You think?

In the end, this was a scorched earth keynote, and one of the best sessions I’ve ever attended at any conference. As a straight, cis, white, male manager of a library tech team, I felt this in the pit of my stomach. Does ZSR do better at a lot of these things than most libraries? Yes – much, much better. Are we as good as we ought to be?