by Ellen Makaravage on July 9, 2019 in Professional Development

My ALA Annual Conference experience was a great opportunity to explore – professionally and personally.

My first evening in DC I visited my favorite place in the city, the Lincoln Memorial at night. 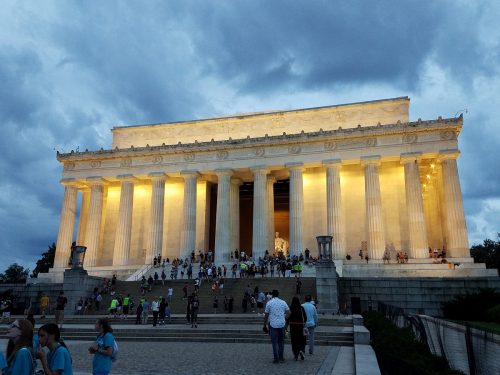 And when you look the other direction, the view’s pretty nice, too! 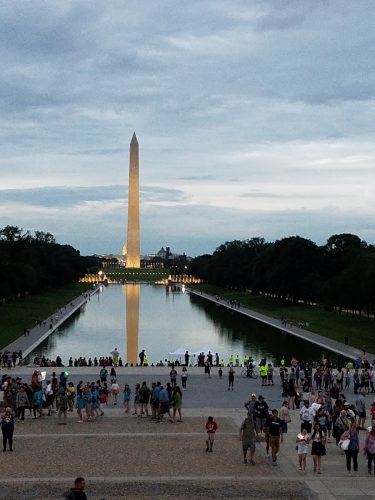 Over the course of the next few days my exploration opportunities included:

I attended the ACRL Copyright Discussion Group which was helpful for encouraging practitioners in matters such as the digitization of foreign works and retention of ILL rights in licensing negotiations. You know you’ve found a group of self-professed “copyright nerds” (it was a badge ribbon) when someone said they try to limit their faculty copying to 10% or 1 chapter and there was a collective gasp in the room.  That individual quickly learned that the CONTU Guidelines (1979) and Classroom Guidelines (1976) on which those limitations are based are 1) not the law and 2) out of date. There was also a discussion of copyright exemptions for creating machine-readable copies of books to enable accessibility.

Later that week, Show Me the Money! Or not? Making sense of the 4th factor of Fair Use, featured presenters who outlined legal cases and defenses used in determining fair use. The 4th factor is, “the effect of the use upon the potential market for or value of the copyrighted work” and figures prominently in most cases about fair use. There were no new legal developments to bring to light but the panelists emphasized the importance of establishing a transformative use as a defense when analyzing whether something is a fair use. And in this session, one of the speakers referred to the CONTU Guidelines as, “complete and utter hooey.” I thought that summed up the matter well.

Empowering Libraries to Lend Digital Books via Controlled Digital Lending was a good overview of the recent developments in controlled digital lending. The Internet Archive is participating in the Open Libraries initiative and the speakers outlined the legal foundations of the project.

The ASGCLA Physical Delivery Interest Group meeting I attended assured me that we are not alone in confronting issues in consortial delivery services. From issues with other libraries not following protocols to problems with delivery times, the discussion was familiar. One participant warned against libraries trying to keep up with the “Amazonification” of service models as they are proprietary and we will not be able to compete. One library system bought trucks and started their own delivery service. Another consortia used collective bargaining and had been able to negotiate a contract with UPS based on volume.

In the Circulation/Access Service Discussion Group I attended the main subject was staff and student training. Among the interesting ideas was a 20 session learning module for both staff and students. Some of the modules were gamified to add interest. At Yale they instituted customer service training for staff. While there was some resistance from long-term staff, the program was a good level-set for everyone. There were many ideas for student training shared in this group which may be useful in future training brainstorming sessions.

Now More Than Ever: Why Leadership on Diversity & Inclusion Requires Emotional Intelligence was a session presented by Dr. Anne Phibbs, founder and president of Strategic Diversity Initiatives who challenged us to move from allies to risk takers. With audience participation exercises we explored how we should be paying attention to emotional responses and feelings as we move toward a more diverse, equitable, and inclusive workplace. Recognition, acknowledgement, trust, and compassion were among the watchwords for this session.

No More Silos: Keys to Implementing Self-Management to Fully Empower Staff was a presentation by librarians from Hillsboro Public Library in Oregon. They shared how they had done away with departments and reorganized around experiences their patrons want to have. Services were divided into quadrants named, Innovate, Cultivate, Explore, and Connect. The decision-making responsibility structure was then flattened and staff took on roles that were matched to their strengths. The presenters said that the idea is that, “you get to spend your day doing what you’re good at.” Their restructuring was based on the book, Brave New Work by Aaron Dignan. This was certainly a thought-provoking session.

There are always so many opportunities to hear wonderful speakers at ALA and this year offered up some great ones.

Associate Justice of the U.S. Supreme Court, Sonia Sotomayor spoke about how libraries had provided the books that guided her through growing up in New York City. The Library Journal has a good story on her presentation. Her speaking style included coming down into the audience and walking the aisles as she spoke about her experiences. Her book for young readers book is called, Turning Pages: My Life Story.

Librarian of Congress, Dr. Carla Hayden interviewed Eric Klinenberg, a Professor of Sociology at New York University who recently wrote, Palaces for the People. The book explores the importance of social infrastructure and Dr. Hayden’s discussion centered around the role of libraries in that infrastructure. 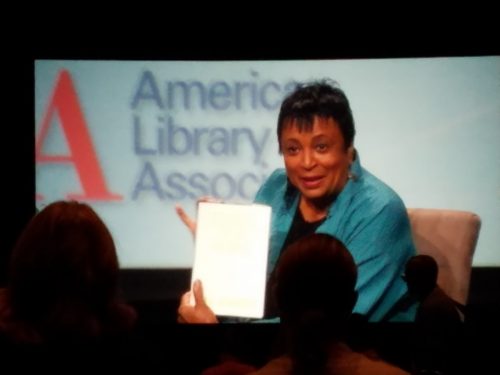 Actor and author, George Takei was part of a panel of people who had illustrated and co-authored his upcoming graphic novel, They Called Us Enemy. 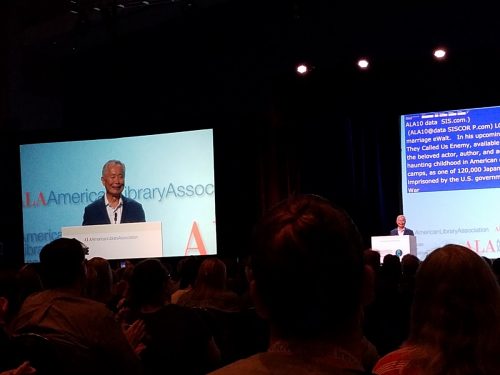 Mo Rocca, a correspondent on CBS Sunday Morning and a panelist on NPR’s Wait, Wait…Don’t Tell Me! was interviewed by Barbara Hoffert, the editor of Prepub Alert at Library Journal for the Closing Session on Tuesday. He spoke about his interest in obituaries and finding relationships in the death dates of famous people. His podcast, Mobituaries, is also the title of his upcoming book which is scheduled to be released in November 2019. Somehow the discussion took a turn and he treated us to a one-handed cartwheel while holding an open bottle of water that did not spill. Impressive! I wish I’d had the forethought to film it. 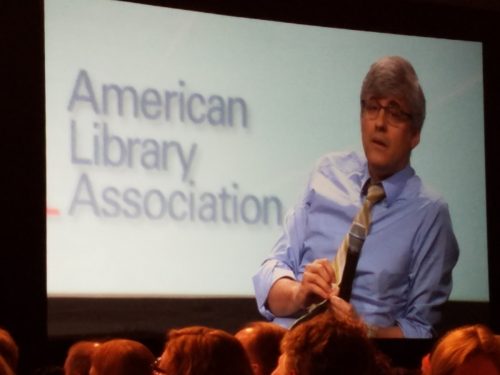 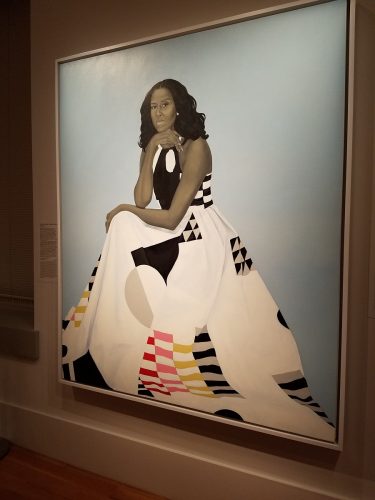 The Readex breakfast, The Lost History of Congressional Violence in Antebellum America with author, Dr. Joanne Freeman, Professor of History at Yale University was enlightening and educational. She spent 17 years writing and researching her book, The Field of Blood: Violence in Congress and the Road to Civil War, which relied heavily on databases of primary sources and newspaper articles to find the backstory of incidents which were not to be found in the Congressional Record. 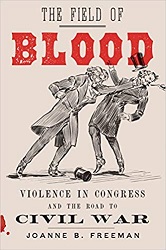 The American Psychological Association (APA) hosted a “Summer Soiree” on the rooftop of Spire, the home of the APA, with a beautiful view on a beautiful day. 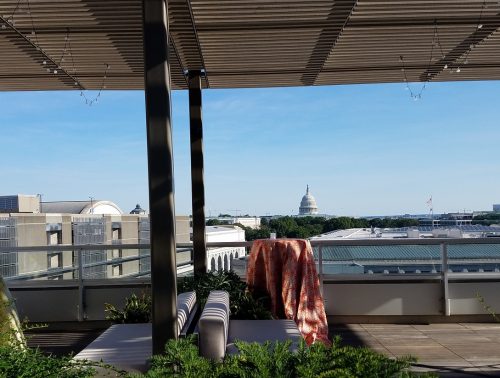 ALA attendees were offered tours of the Library of Congress and so I took the opportunity to explore. The insight of our guide regarding the construction of the building and the symbolism of the art really added depth to my appreciation for this national treasure. 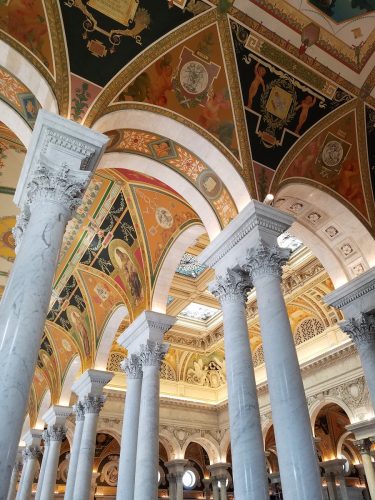 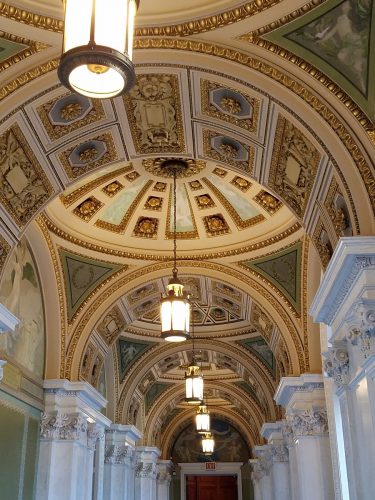 The next evening the Library of Congress had an Open House for the ALA attendees which include entrance into the Main Reading Room where we met with some of the librarians from various departments. We were also able to have our picture taken with the Librarian of Congress, Dr. Carla Hayden. 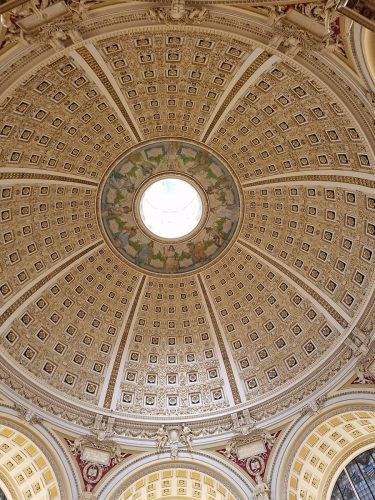 Around the edge of the top of the rotunda are figures representing countries that were thought to have contributed to the evolution of Western Civilization. 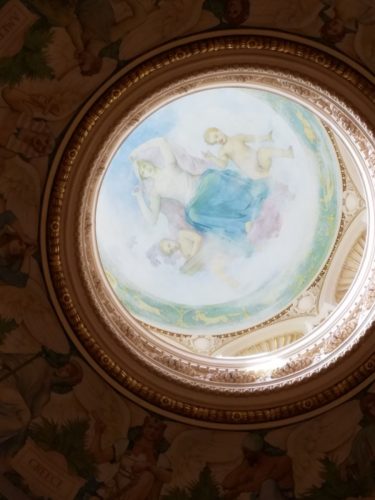 The rotunda in the Main Reading Room shows Human Understanding lifting the veil of ignorance from her eyes.

No trip to DC is complete without taking in some of the Smithsonian museums. I was able to spend a short time in the National Museum of Natural History to see their new dinosaur display which just recently reopened. 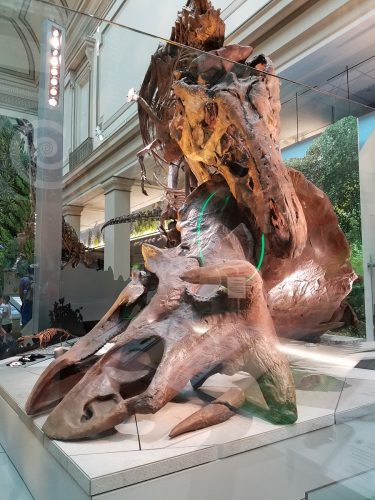 I also flew through the National Air and Space Museum so quickly I forgot to take pictures.

At the Closing Session on Tuesday, Wanda received the official presidential gavel. 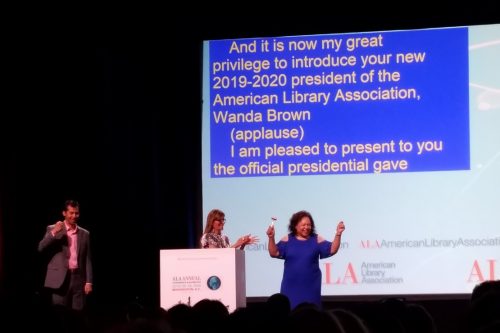 At the Inaugural Luncheon Wanda announced her three initiatives for the upcoming year: a campaign themed “Finding Your ALA” designed to plug new professionals into ALA, creating a focus on the “pipeline to prison” for young African-American and Hispanic men and the role libraries can play in this issue, and working with the staff at ALA to negotiate and manage change. 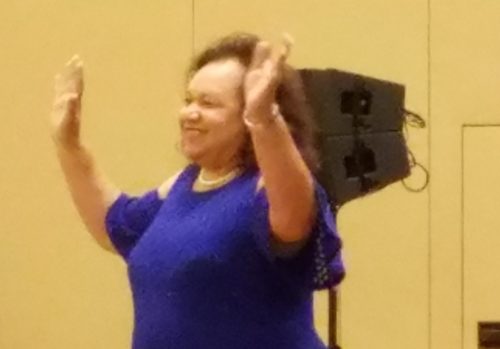 Wanda Brown and the Executive Board and ALA Division Presidents.

Traveling by train seemed like a wise alternative to battling traffic in DC. 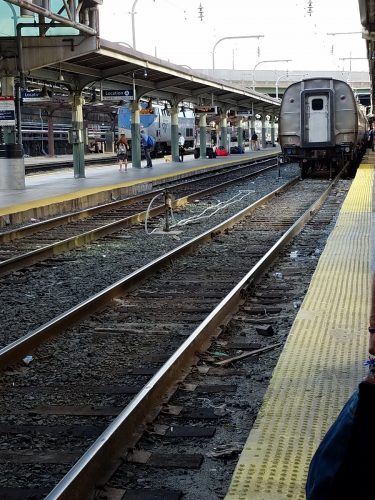 The long train ride home was welcome after all that exploring.