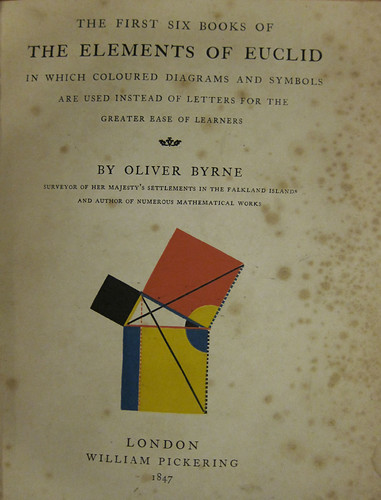 THIS WORK has a greater aim than mere illustration; we do not introduce colours for the purpose of entertainment, or to amuse by certain combinations of tint and form, but to assist the mind in its researches after truth, to increase the facilities of instruction, and to diffuse permanent knowledge.

Oliver Byrne (ca. 1810-1890) was an eccentric Irish mathematician and teacher. His Elements of Euclid is a classic of enough enduring interest that a facsimile reprint was published in 2010. Byrne’s Euclid is admired as much for its surprisingly modernist design and color palette–which seems to anticipate Bauhaus and De Stijl— as for its innovative pedagogy. 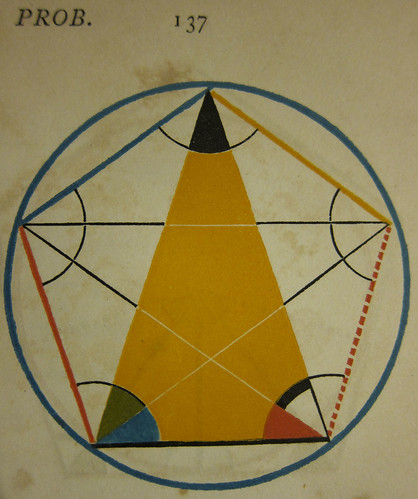 Geometry was emphasized as a particularly vital part of a basic mathematical education in 19th century Britain, and Euclid was still the standard curriculum. However, many reform-minded educators (including Byrne) believed that Euclid’s geometry was not being taught effectively to modern students [cf. Alice Jenkins, “What the Victorians Learned: Perspectives on Nineteenth-Century Schoolbooks” Journal of Victorian Culture 12.2 (2007) 267-272]. Several 19th century mathematicians attempted to make use of new printing technologies to produce new and improved editions of Euclid, but Byrne’s Elements was the most innovative. As Jenkins describes it,

This beautiful book adopts the principle of explanation via visual illustration, but goes much further than other attempts. Where many other textbooks confined themselves to providing enlarged diagrams and replacing Greek letters for angles with Roman ones, Byrne’s book eliminates letters altogether, instead printing lines, angles and figures in different vivid colours. Byrne’s book was far more than a response to new markets for textbooks: although clearly Euclidean, it was an entire rethinking of the nature of geometrical pedagogy. [270] 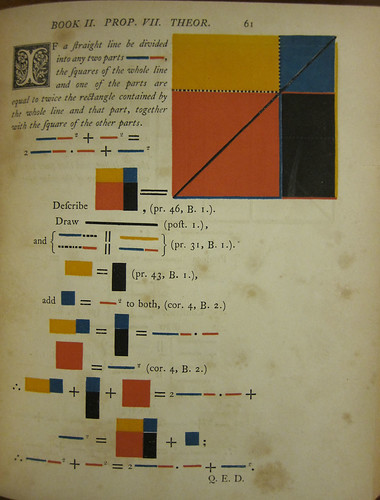 Byrne’s book was printed by Charles Whittingham II at the Chiswick Press, a small press noted for its innovative design and devotion to high quality printing, especially of illustrated works. And it is the graphic design elements of Byrne’s book that spark the most interest today. The New York Times review of the Taschen facsimile reprint enthused that “The First Six Books of the Elements of Euclid is so rationalist, minimalist and aesthetically pure, every graphic designer, book lover and math nerd will be as awe-struck as I was.” 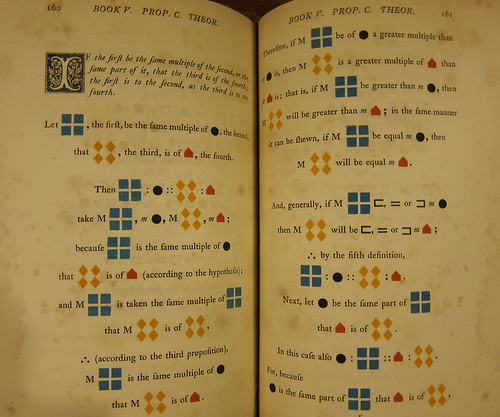 Wake Forest’s 1847 first edition of The First Six Books of the Elements of Euclid was purchased by the Library in 1986.

3 Comments on ‘Rare Book of the Month: The First Six Books of the Elements of Euclid, by Oliver Byrne (1847)’