Tom Hayes’s documentary film on the life of his father, Harold Hayes, is titled Smiling Through the Apocalypse: Esquire in the Sixties. The film, which is currently showing at the River Run Film Festival, takes its name from a 1969 anthology of Esquire magazine pieces. Both works provide a view of the decade as chronicled by the iconic magazine and its remarkable editor.

In November of 1969 Esquire magazine subscribers received a special offer from publisher Arnold Gingrich. The enclosed letter began, “You are just now escaping, by the skin of your teeth, the most incredible decade in this country’s history: the 1960’s.” It continued,

From Jack Kennedy’s brave cry, “Let us begin,” to the mad smile of Sirhan Sirhan . . . from the first jarring beats of rock music through the frightening chants of “Up Against the Wall,” you have in fact lived through the most interesting of times: a time of generation gaps, sex explosions, peacock revolutions, drug fads, pop art, war, madness, and super-cockeyed wackiness.

And so, welcome to the end of it all. The “cursed” decade is over, and frankly we are in a mood for celebration. To this end we have prepared the most ambitious project in Esquire‘s 36-year history — a book of the decade, our own special version of the sixties. It is a big, handsome, oversize volume of more than a thousand pages called

“Smiling Through the Apocalypse: Esquire’s History of the Sixties” 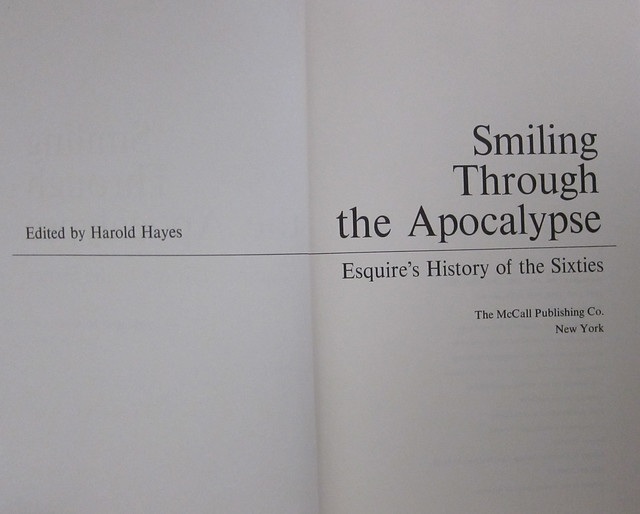 The anthology gathered some of the most memorable articles from Esquire’s most memorable decade. Wake Forest alumnus Harold Hayes had become managing editor in 1961 and chief editor in 1963, and as Frank DiGiacomo observed in a 2007 Vanity Fair article

Hayes’s Esquire would identify, analyze, and define the new decade’s violent energies, ideas, morals, and conflicts—though always with an ironic and, occasionally, sardonic detachment that kept the magazine cool as the 60s grew increasingly hot. Esquire would become the magazine of the New: “The New Art of Success,” “The New Seven Deadly Sins,” “The New Sophistication,” and, ultimately, the New Journalism, the fancy term given to nonfiction that’s written like a novel.

The Harold Hayes Papers, housed in ZSR’s Special Collections and Archives, shed light on  the creation and development of Smiling Through the Apocalypse. The project was important to Hayes, as it documented the eventful decade in the history of both the nation and the magazine. In a memo to Arnold Gingrich Hayes asked for complete editorial control of the project: “I hope you will not believe me to be challenging your authority or position with the magazine if I lean heavily on your forebearance [sic.] and request you to let me do this one alone.” (Gingrich’s response in a handwritten note: “I thought we had already reached that conclusion.”) 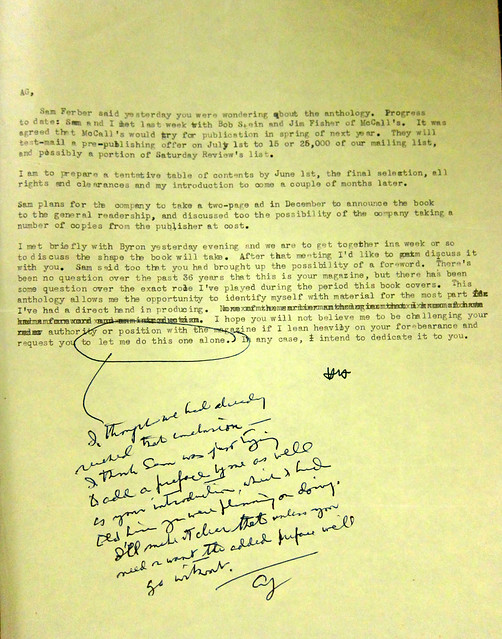 Materials in the Hayes Papers also show that the anthology’s (and the magazine’s) tone of casual irreverence was achieved through a great deal of creative brainstorming and meticulous planning by Hayes and his editorial staff. Below is one of Hayes’s many pages of notes on Smiling Through the Apocalypse. Here he listed possible titles for the book itself and for its sections. 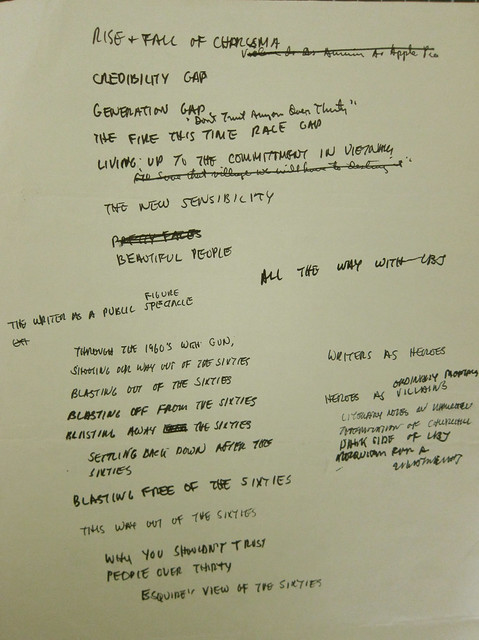 Another page of notes listed categories with possible articles. A potential “section on Ladies” did not make it into the final book. 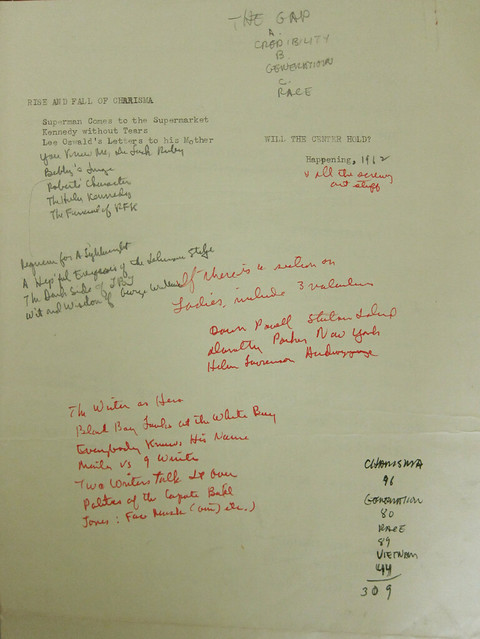 In order to have the anthology ready for sale by Christmas 1969, Esquire staffers had to meet some tight deadlines– as this memo to editor Byron Dobell made clear. 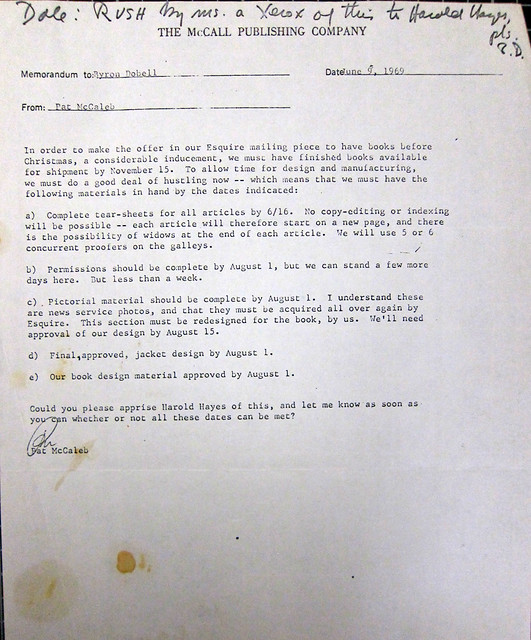 The volume led off with Norman Mailer’s famous article on John F. Kennedy, “Superman Comes to the Supermarket.” Its original publication in 1960 had sparked the first of many conflicts between Esquire and the contentious author, when Arnold Gingrich changed the title of the article without Mailer’s consent.

Although all of the articles in Smiling Through the Apocalypse had been published in Esquire, there were still issues of copyrights and royalties to be sorted out for the 50 authors collected in the anthology. 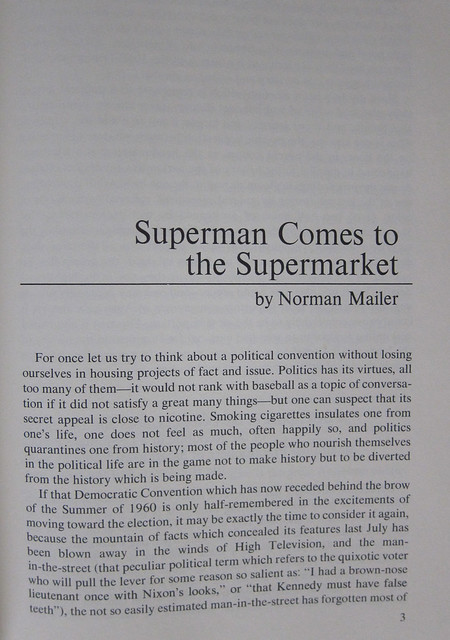 A typescript draft of another advertising flyer for the book is an artifact from a time when cutting and pasting involved actual scissors and tape. But the pasted-in quote from Harold Hayes provides his raison d’etre for the Esquire anthology:

The real history of the Sixties has already been written . . . by talented people who didn’t know (or care) they were writing history, because they were reporting what happened– as it happened. It’s all there — told like it was — in the pages of ten years of Esquire. 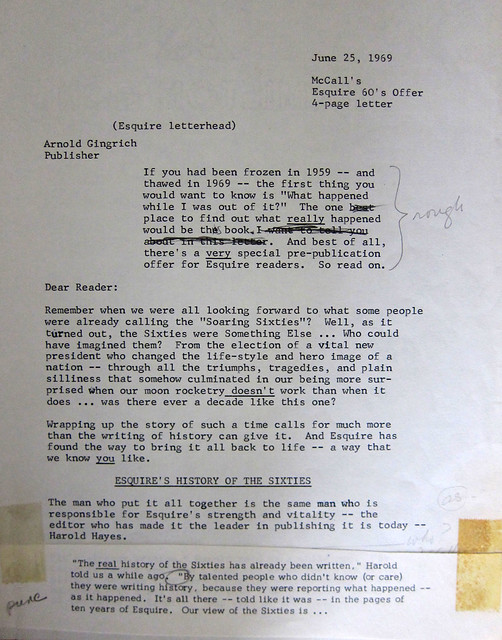 Harold Hayes’s introduction to Smiling Through the Apocalypse sums up Esquire‘s journey through the pivotal decade in American history. His take on Esquire began as a reaction against “the banality of the Fifties.” Hayes and his fellow editors and writers wanted to shake up the magazine world and bring a fresh perspective to American journalism:

[I]n words and/or pictures (curiously the pictures always provoked the greatest outrage, especially George Lois’s covers)  and occasionally with some loss of dignity, the idea was to suggest alternate possibilities to a monolithic view. . . . At Esquire our attitude took shape as we went along, stumbling past our traditional boundaries of fashion, leisure, entertainment and literature onto the more forbidding ground of politics, sociology, science and even, occasionally, religion. Any point of view was welcome as long as the writer was sufficiently skillful to carry it off, but we tended to avoid committing ourselves to doctrinaire programs even though advised on occasion that we might thereby better serve the interests of mankind.

As the decade wore on, the writing in Esquire reflected the increasing upheaval in the society around it:

Against the aridity of the national landscape of the late Fifties we offered to our readers in our better moments the promise of outright laughter; by the end of the Sixties the best we could provide was a bleak grin.

Hayes concludes his introduction with a reference to the “collective confusion” of Americans in 1969.

Harold Hayes continued as editor of Esquire until 1973, when a dispute with the management led to his resignation. Hayes went on to other projects, and Esquire became a very different sort of magazine. Nearly 50 years after its publication, Smiling Through the Apocalypse is a fitting monument to the editor and the magazine that best captured the Zeitgeist of the 1960s.

ZSR Special Collections’s copy of Smiling Through the Apocalypse was owned by Harold Hayes himself. It was part of the  large collection of books and manuscripts that Hayes bequeathed to his alma mater shortly before his death in 1989.

6 Comments on ‘Smiling Through the Apocalypse, edited by Harold Hayes (1969)’