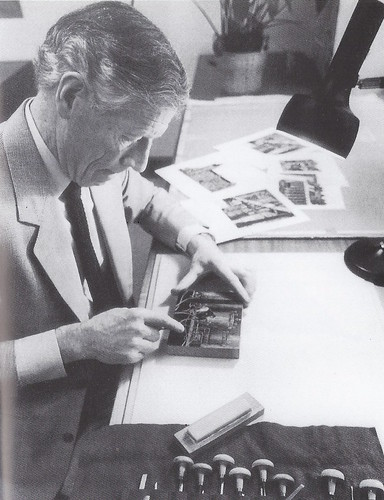 This installment of Irish Ink is introducing Dolmen Press artist, Tate Adams.  Adams contributed a number of illustrations to Dolmen Press publications, which ZSR Library Special Collections and Archives is proud to house.

Tate Adams was born in Holywood, Northern Ireland in 1922. He lost his mother early at age 11. Tate’s father was a farmer and there was some expectation he would also farm. However, as fate would have it, Tate had seen some wood engravings. The engravings were in A True Tale of Love in Tonga by Robert Gibbings from the Golden Cockerel Press and this left a lasting desire to make prints. In 1936, Tate began working as a draftsman in a family run textile engineering firm. Adams made drawings of machine parts, but also went sketching with artist friends on weekends. During this time, Tate’s Grandfather made engraving tools for him and Adams began making prints. During World War II, Adams served as a draftsman with the British Admiralty and was transferred to Ceylon. In Ceylon, Tate made friends with a Buddhist monk and the two painted and visited galleries together.

Following the war, Adams returned to Ireland and married. Shortly thereafter, Adams and his wife moved to Melbourne, Australia, the home of his wife’s family. Here, Adams found a home and was asked to join the staff of the Royal Melbourne Institute of Technology (RMIT). 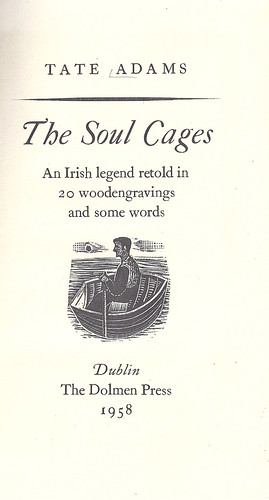 During this time, on a trip to London, Tate Adams met Liam Miller, operator of the Dolmen Press. In correspondence with Adams, he wrote to me the following: “I can’t remember how I met Liam Miller. But as soon as we met it was terrific. I showed him my sketches for The Soul Cages and he couldn’t wait to publish the book.” Adams spent a year working with Miller at the Dolmen and in 1958 printed 20 wood engravings for The Soul Cages. This book is an Irish folk tale of a fisherman and a mermaid. It could be said that printing The Soul Cages solidified the idea of printing artist books in the mind of Tate Adams, as he continued this work for the remainder of his career. Describing his relationship with Liam Miller, Adams wrote of Miller “Like soul mates. Incredible. I loved it. He was a wonderful man. Closest person to a saint I ever met. Everybody loved him. He was totally revered, and everyone worked for nothing for him. The whole set up was wonderful. Meeting the writers and poets and all the people was heaven.” Adams wrote “This stay with the Dolmen Press reinforced a desire to establish my own press.”

Adams also produced drawings for the Dolmen Press imprint, Enter These Enchanted Woods by Arland Ussher and Carl Von Metzradt. This book was an exploration of Grimm’s fairy tales. When Adams returned to Australia, he completed linocuts for a Dolmen Press reprint of Riders to the Sea by Synge that he had started while in Ireland. Riders to the Sea, however was not published until 1969. Tate Adams maintained a relationship with Liam Miller and the Dolmen Press. Adams also illustrated: Cast a Cold Eye by Brendan Kennelly and Rudi Holzapfel (1959). 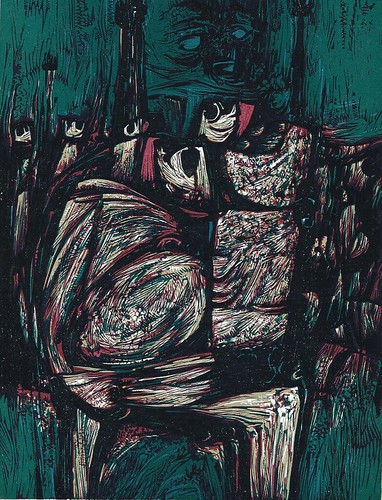 Tate Adams taught printmaking at RMIT from 1960 until 1982 where he established a printmaking diploma and became an important founder of printmaking in Australia. In 1966, Adams founded Crossley Gallery in Melbourne which was the first Australian gallery to feature prints. At the Crossley Print Workshop (1973), Adams established a place where printmakers could print and edition their work. In 1977, Adams and colleague, George Baldessin established Lyre Bird Press to print artists books. 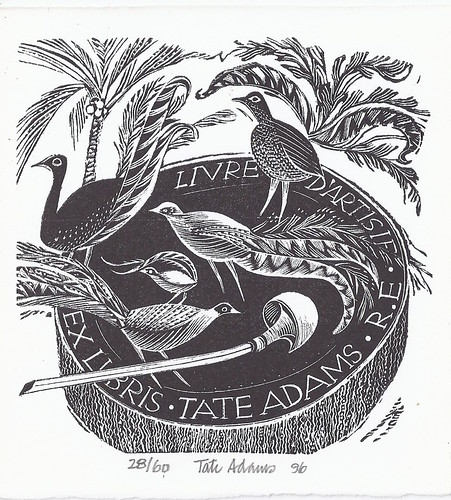 Adams’ partner at The Lyre Bird Press, George Baldessin died tragically in an auto accident in 1978. Adams retired in 1982, when he moved from Melbourne to Magnetic Island, Queensland off the Australian coast from Townsville. In 1991, Adams was encouraged to come out of retirement and re-opened The Lyre Bird Press at James Cook University in Townsville, Australia. Adams’ work is now less about prints and has grown into a series of gestural paintings. A 2003 series of these paintings is based on Synge’s Riders to the Sea.

2 Comments on ‘Tate Adams, Printmaker and Irish Expatriate in Australia’