by Jeff Eller on January 14, 2016 in Professional Development

This year’s Midwinter was a bit unusual for me in that I didn’t find as many programs of obvious interest as I usually do, which led to my attending some sessions that I normally wouldn’t have. About this I have no complaints. It was fun, as was this outdoor section of the Brattle Book Shop (est. 1825): 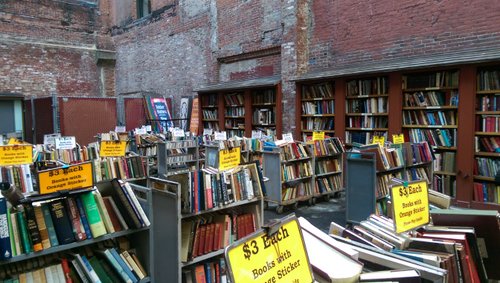 The Role of the Professional in Technical Services Interest Group put on a program about the changing landscape of tech services (in our case Resource Services) departments as silos surrounding different functional areas continue to break down and collaboration and outsourcing of work to vendors become more common. Sally Gibson from Illinois State talked about “solution creators” as a distinct role within TS departments; these individuals excel at recognizing patterns and redundancies and at thinking creatively about workflows. Her emphasis on attitudes and behaviors (as opposed to technical skill sets) as essential traits is something we’re hearing more about lately in ALCTS-land.

After the meeting of my ALCTS-AS Organization and Management Committee got out early, having bravely crossed a windswept bridge leading away from the sea, I wandered into YALSA’s 2016 Best Fiction for Young Adults Committee’s annual review of YA fiction. This was not my usual scene. A lengthy procession of super-earnest Boston-area youths (some in middle and some in high school, I gathered) took the podium to provide one- to three-minute reviews of new works of YA fiction, recommending whether they ought to make YALSA’s final list of recommended books. What kind of kid wants to go present at a conference for librarians? The answer: good kids. Their enthusiasm and sincerity were infectious; I found myself remembering that protocol-obsessed adolescents were my favorite patrons in my early days working at the circ desk of a public library. I will always miss that.

On Sunday I learned a bit about the rise of the online scientific megajournal, a phenomenon about which I previously knew little. Two representatives from publishers of such journals (Springer Nature and Elsevier) as well as one from AIP led a very participatory discussion of the value of these online journals, which publish several thousand articles per year and have been accused of causing a proliferation of lower-quality scientific publishing. From the perspective of authors, the journals sometimes function as a backup plan to publication in the more prestigious traditional journals. Audience members expressed concern about the extent to which megajournals depend for their profits on Article Processing Charges (ACPs) paid by authors. This would seem a valid concern. The publishers make the case that their journals provide an important service by bringing more scientific findings out of the gray literature and into the main scientific corpus. “This can only be a good thing,” said one. My sense is that some commentators would disagree.

I enjoyed a presentation by two librarians from the coolest combination of colleges possible – Nurhak Tuncer from the City College of Chicago’s Malcolm X College and Reed David from the University of Alaska Anchorage – in which the challenge of cataloging self-published ebooks was discussed. This is something Carolyn has worked on here, cataloging the ebooks published by Bill Kane’s in-house Library Partners Press. The main emphasis of the presentation was on decisions the cataloger must make about Publisher, Place of publication, etc. In the same session, Karen Snow from Dominican University talked about ethical decisions involved in cataloging and/or re-cataloging “false memoirs” – books presented as fact but later shown to be largely fictional (think A Million Little Pieces, The Education of Little Tree). Some libraries choose to re-class and move these books to fiction; others leave them where they are with the addition of notes. Practices vary, and the right decision for an academic library might not be right for a public one. Ms. Snow encouraged establishing a consistent policy. I think I disagree: to me these need to be treated on a case-by-case basis.

We are nearing the end. At my ALCTS Planning Committee meeting, we discussed strategies for requiring more accountability from various ALCTS committees with regards to the alignment of their activities to the Strategic Plan we adopted last year. Expect a new reporting form, people! Finally, on Monday morning, Nancy Lorimer, Head of Metadata Services at Stanford, presented on her library’s participation in the Linked Data for Production project, in which attempts are being made at coming up with real-world workflows that incorporate linked data, for instance, the insertion of URIs into legacy MARC bib records and authority records. As entities (a somewhat far-ranging concept) become more important in a linked data environment, authority control becomes a central concern. The fact that we’re on top of this at ZSR is good to know. Thanks, Steve. 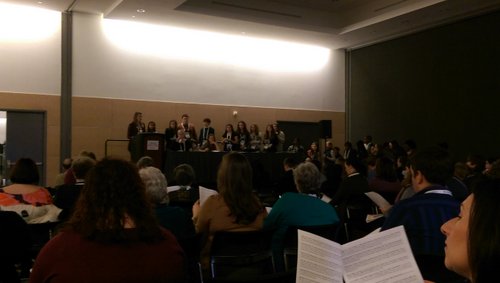