by Alice Eng on November 15, 2019 in Professional Development

The Charleston Conference isn’t a conference I attend every year. I typically think of it as a conference dedicated to collection development, acquisitions, and networking with vendors. Though all of that is still true, the conference continues to evolve by offering other sessions that are applicable to professionals outside of technical services. This year’s conference theme was communication, so, many sessions, including my own, were about working better with vendors and colleagues. Not surprising to veteran Charleston Conference attendees, many sessions were joint librarian/vendor presentations. The issue that unified a lot of the sessions I attended was transparency. If the presenters were presenting on a successful project it was due to transparency among the group, the vendors, and the institutions. If the presenters were talking about a problem, it seemed to stem from a lack of transparency, usually in the form of lack of communication or inclusion.

One non-session I attended was an invitation to a vendor focus group. As expected, the boxed lunch was mediocre and the conversation was about vendors communicating with libraries. One of the most surprising revelations to the vendor was how many library professionals had experienced being ignored by salespeople. On one side, library professionals agreeing that it was common for vendors to not respond to phone calls or emails. On the other side, salespeoeople with their mouths open in shock that any salesperson would thwart a sale. If there is something that is unconscionable to vendors and publishers, it is the loss of a sale. I also believe that the salespersons in the room were genuinely shocked that a salesperson would not do the most basic function of sales; return a call or email. The moderator called it “Sales 101.” Fortunately, the vendor that sponsored the focus group has a reputation for good customer service.

My presentation topic was about the overuse of acronyms in libraries. The idea began at another conference as a joke between a salesperson I formerly worked with (Nicole Ameduri from Springer) and myself. We both laughed at how many acronyms were thrown at us in meetings, how frequently we were confused in conversations, thought we knew what someone was saying only to find out later we completely misunderstood, and how we often nod along reluctant to ask for explanations. We decided this was a topic worth discussing so Nicole, Elizabeth Lightfoot (Electronic Resources and Serials Librarian from Florida International University), and I presented on why acronyms in the workplace are problematic. We discussed how acronyms are used as an exclusion tool, how vendors are often expected to understand localized jargon and if that is a reasonable expectation, the confusion acronyms create, and to be mindful when speaking and writing. 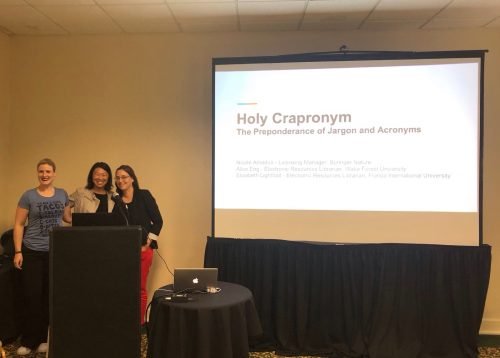 The Charleston Conference is a good conference to showcase successful partnerships between vendors and libraries. There is no shortage of stories about how contentious and difficult the vendor/library relationship can be. But, for a few days, it is nice to see that people from all sides can successfully work together.

10 Comments on ‘Alice at Charleston Conference 2019’