by Christian Burris on October 26, 2019 in Professional Development

Last week, I attended the 63rd Biennial Conference for the North Carolina Library Association here in Winston-Salem, and it was an excellent conference as always. 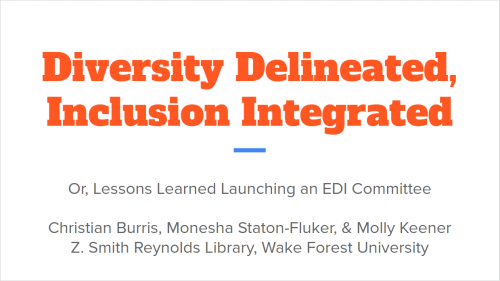 A prime highlight was the privilege to give a presentation on our library’s Equity, Diversity and Inclusion Committee with Molly Keener and Monesha Staton-Fluker.  Being one of the first sessions on the first day of the conference, we didn’t know how many people would be present or how responsive they would be at that hour.  Thankfully, we had an audience of more than thirty people and they were engaged throughout the presentation and afterward.  On a personal note, I’m also glad that we were able to participate in the growing discussions around such an important topic.

I also served on the Local Arrangements Committee for the conference, and everything went smoothly in that regard.  Decca Riedel Slaughter, a former student assistant in Resource Services, served as the chair of the committee and did an excellent job in coordinating with the facilities and food in the Benton Convention Center as well as the Central Library, the site of the All-Conference Reception.  Steve Cramer (whom you may know) was also a part of the committee and it was a pleasure to work with him again. 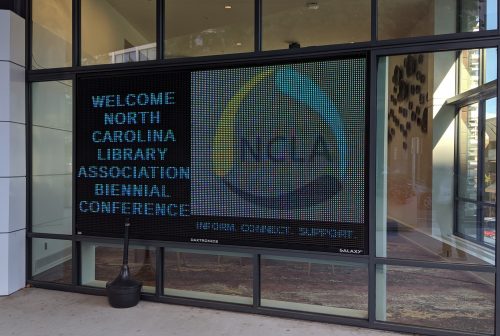 I’ve attended NCLA for several years, and it always feels like a homecoming for the state’s library community.  It’s a pleasure to see so many colleagues, classmates, professors, and friends again, and the closing keynote speaker Jaki Shelton-Green talked about the overall collegiality.  But the most exciting moment was to reconnect with a fellow Wake Forest alum who is completing her MLIS degree at East Carolina University and was attending her first NCLA.  Now there’s another one in the family!