by Steve Kelley on August 7, 2019 in Professional Development

I realize this post is quite late and rather than bore you with my reasons/excuses I’ll simply apologize and move on. Unfortunately, running late is part of the story of my attendance at the 2019 Annual ALA Conference in DC, because I started off my trip by missing my train from Greensboro to Washington. With no other options available (other than waiting for the next train which would get me in a day late and after meetings that I really needed to attend), it was obvious I had to drive and it was time to hard nose the highway (“Hard Nose the Highway”? Title of a 1973 Van Morrison album? Anybody? Charles and Scott would get it). Funny enough, even with getting a bit lost a couple times, I still arrived earlier than I would have if I had made my train.

One of the big reasons I had to make sure I got to DC on time is that I had to attend a meeting of the Executive Committee of the Continuing Resources Section (CRS) of ALCTS, because I’m the incoming Chair-Elect of the section. One of the major topics of our meeting was the possible merger of ALCTS (Association for Library Collections and Technical Services), a Division of ALA, with two other Divisions, LITA (Library & Information Technology Association) and LLAMA (Library Leadership and Management Association). The leaders of the Divisions had hoped for a vote on the merger before this year’s conference, but it was delayed when they realized that they needed to do some more work on the plan. Currently, the plan is to have a vote on the merger at the 2020 ALA Conference in Chicago. If it passes, the plan would go into effect at the beginning of ALA’s new fiscal year in September 2020. Because ALCTS has a more complex arrangement than the other Divisions, and because some of the committees in ALCTS must continue to exist because they do practical work, some of which is related to international standards, the merger will have a heavier impact on ALCTS than on LITA and LLAMA. The current thinking is that, rather than having Sections in the new Division, there will be Nodes, which will be more flexible ways to organize people with the same professional interests. The current ALCTS Section of Cataloging and Metadata Management is likely to make the transition into being a Node with relatively little fuss. However, the Current Resources Section (of which I am Chair-Elect), is likely to have its duties and interests dispersed across other Nodes. I will be Chair-Elect of CRS until July 1, 2020 when I become Chair. However, if the merger plan goes through, I would be the last ever Chair of CRS, and my term would run just three months until September 1, 2020. So, I might well be the guy to put the chairs on the tables and turn out the lights for the Continuing Resources Section.

So, that was the reason that I had to get to ALA on time, but the reason I stayed longer than usual was to attend Wanda Brown’s inauguration as President of ALA. It was a wonderful event. Wanda spoke about her plans for the coming year and the Presidential Initiatives she will be pursuing. As a member of her Presidential Advisory Committee, I’ve been involved in helping to plan these initiatives and it was a thrill to see the warm reception they got from the audience. 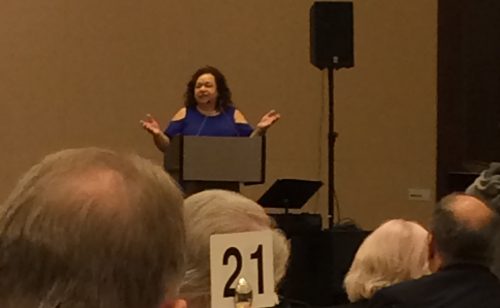 One of the initiatives is a Find Your ALA campaign to encourage membership growth and involvement in ALA. The idea is to make ALA less daunting and confusing and to make it more welcoming 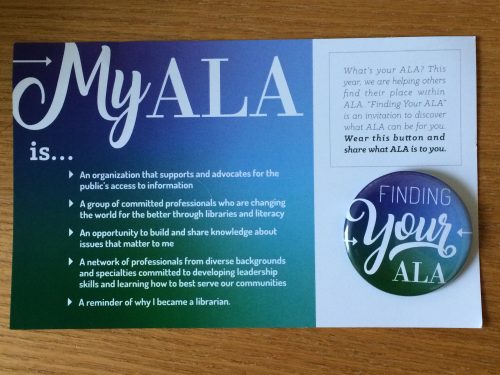 Another initiative is for ALA to develop a plan to help with the problem of the school-to-prison pipeline that plagues many underprivileged communities, and particularly communities of color. The school-to-prison pipeline is a process that pushes children from schools into prison, by criminalizing young people of color and treating them with harsh and disproportionate disciplinary practices at a young age. This problem is felt particularly acutely in our own community, as Wanda pointed out that Forsyth County was rated the 3rd worst county in the United States for social mobility (that is, the chance of people born into poverty to move out poverty in their lifetime). This is an important issue and I’m glad to see ALA addressing it.

In between those two big events, I did general conference stuff and found out some interesting things. At the meeting of the MARC Format Transition Interest Group, Terry Reese of Ohio State talked about a massive experimental project they are pursuing where they are trying to aggregate the metadata from multiple sources (MARC cataloging, EAD, Drupal, etc.) and reconcile them, and allow the reconciled, compiled metadata to be searched. Seems wildly ambitious to me. Good luck on ’em.

I also went to a Bibliographic Conceptual Models Interest Group meeting, where Tiziana Possemato from Cassalini Libri discussed the Share-VDE Initiative (a cooperative group working to develop linked data in libraries). She said that while BIBFRAME has a three-entity model (Work, Instance and Item), Share-VDE’s conceptual model consists of four entities: Super Work, Work, Instance and Item. This presentation caused a bit of a stir and has some cataloging bigwigs wondering if BIBFRAME needs to introduce a fourth entity (which would put it in line with FRBR).

In addition, I attended a panel-discussion called “Discussing Social Issues Through Speculative Comics,” where comics creators Greg Pak, Ezra Daniels, Sanford Greene, and Delilah S. Dawson talked about using science fiction, fantasy, or horror themed comics to explore real life social issues. It was very interesting and I got some good suggestions on comics titles to check out.

I also went to the ALCTS President’s Program, which featured Marcia Chatelain, professor of history at Georgetown University, discussing her upcoming book, “Franchise: The Golden Arches in Black America.” She presented a fascinating history of the complex relationship between McDonald’s and the African-American community, which in part stems from McDonald’s being the first major fast food chain to have black franchise owners and locations in black neighborhoods. I was lucky enough to win an advance reader’s copy, based on where I sat in the auditorium. Carolyn has asked to borrow it when I finish it, so there’s already a waiting list.

All in all, it was an interesting, albeit somewhat odd, ALA for me. I may get back to something more normal next time.