by Megan Mulder on September 6, 2012 in Events & Exhibits, Exhibits in Special Collections 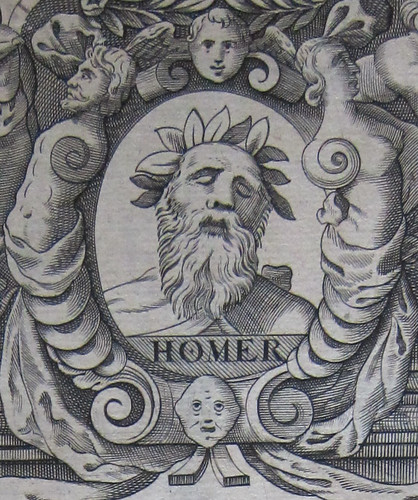 Oft of one wide expanse had I been told
That deep-brow’d Homer ruled as his demesne;
Yet did I never breathe its pure serene
Till I heard Chapman speak out loud and bold…

The book that inspired Keats’s famous sonnet, George Chapman’s The Whole Works of Homer,  is one of the volumes included in the Z. Smith Reynolds Library Special Collections fall 2012 exhibit.  On view August 2012 through February 2013, Faithfully English’d: Classical Literature in Translation features Greek and Latin classics in English translations from the 14th through 20th centuries. All of the books are from the ZSR Rare Books Collection.

The exhibit includes translations by Geoffrey Chaucer, George Sandys, John Dryden, Aphra Behn, Alexander Pope, Ezra Pound, Allen Mandelbaum, and many others.  The books themselves, published from the 16th through 20th centuries, are as varied as the texts they convey. From large, lavishly illustrated folios to cheaply bound schoolbooks, the different physical manifestations attest to the diverse readership of classical translations.

The five centuries’ worth of books on view are a testament to the enduring fascination that English-speaking authors and readers have for the literature of ancient Greece and Rome. But the texts also show how styles and theories of translation have changed over the centuries. George Chapman, a contemporary of Shakespeare, was the first author to attempt to render both the Iliad and Odyssey into English verse. Chapman’s extravagant Elizabethan style contrasts with the carefully crafted heroic couplets of Alexander Pope’s 1715 Iliad. William Morris’s Odyssey (1887), inspired by Anglo-Saxon poetry, proves interesting if not particularly readable. And annotated typescript draft pages of Allen Mandelbaum’s 1990 Odyssey show the painstaking process of translating Homer’s verse into modern English poetry.

Interest in Homer’s epics has scarcely flagged for the past 500 years, but some classical authors seem to resonate more strongly in certain periods. Aesop’s fables, for example, are now largely regarded as children’s fare. But in Roger L’Estrange’s 1692 translation they are the basis for pointed political satire. The Roman poet Ovid, widely read from medieval times through the 18th century, is the subject of many translations and adaptations, from Chaucer’s Legends of Good Women (on view here in a 1515 edition) to Mandelbaum’s 1993 translation of the Metamorphoses.

Throughout the past five centuries translations have provided access to classical texts for those who cannot read the original Greek and Latin. From the Renaissance through the 19th century, anyone who wanted to participate in the literary culture and intellectual discourse of England needed to be familiar with the classics. But fluency in Latin, and even more so in Greek, required an elite education difficult for anyone but the sons of wealthy families to attain. John Keats, the son of a London stable-master, experienced Homer through Chapman’s verses. William Shakespeare, whose merchant-class origins left him with “small Latin and less Greek,” used Thomas North’s 1579 translation of Plutarch’s Lives as the basis for Julius Caesar, Antony and Cleopatra, and Coriolanus. And Aphra Behn , in a dedicatory verse for Thomas Creech’s translation of Lucretius (1638), praised the translator while lamenting the fact that women were denied a classical education:

The Godlike Virgil and Great Homer’s Muse
Like Divine Mysteries are conceal’d from us….
But… Thou by this Translation dost advance
Our Knowledge from the state of Ignorance;
And Equall’st Us to Man!

The best translations in every era combine thorough scholarship with literary sensibility and a profound appreciation of the original texts. Pope, Dryden, and others preface their works with discussions of how best to render Greek and Latin texts into English. Most counsel a middle ground between literal translation and loose paraphrase. Pope famously observes in his introduction to the Iliad that

It is the first grand duty of an interpreter to give his author entire and unmaimed; and for the rest, the diction and versification only are his proper province, since these must be his own, but the others he is to take as he finds them.

Other authors have adapted Greek and Latin texts to create entirely new works of literature. From Chaucer to James Joyce, whose Ulysses is on exhibit here, countless English authors have taken inspiration from the classics.

The ZSR Special Collections exhibit is one of several fall 2012 events celebrating classical translations and adaptations. Other events include the Reynolda House special exhibit Romare Bearden: A Black Odyssey, a celebration of the life of Allen Mandelbaum, and an appearance by children’s author Rick Riordan.

Faithfully English’d: Classical Literature in Translation  is on exhibit in the Special Collections and Archives Reading Room on the 6th floor of the Reynolds Wing. For more information contact Megan Mulder at 758-5091.