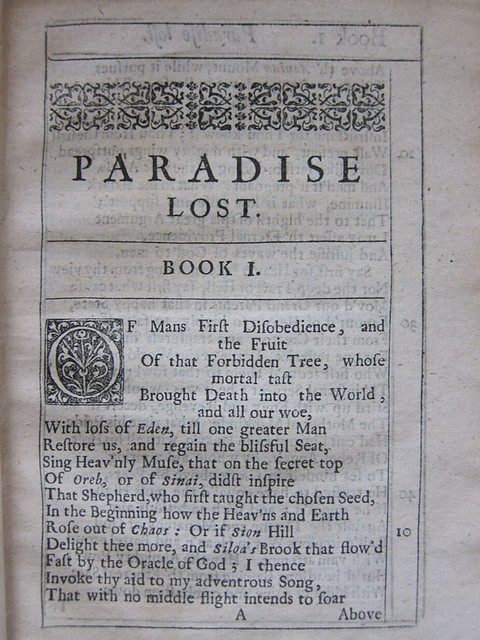 The first issue of John Milton’s epic poem Paradise Lost appeared in 1667. The anti-royalist Milton, blind and near sixty years old, had fallen on hard times in Restoration England, but Paradise Lost fit the apocalyptic mood of a nation that had recently suffered an outbreak of plague, the great fire of London, and defeat in the Anglo-Dutch wars.

Milton’s legal agreement with printer Samuel Simmons is one of the earliest English author contracts to survive. In it Simmons agrees to pay Milton £5 for the manuscript, plus an additional £5 after 1300 of the 1500 copy initial print run have sold, with any additional profits going to the printer. This was a fairly standard author contract of the day. 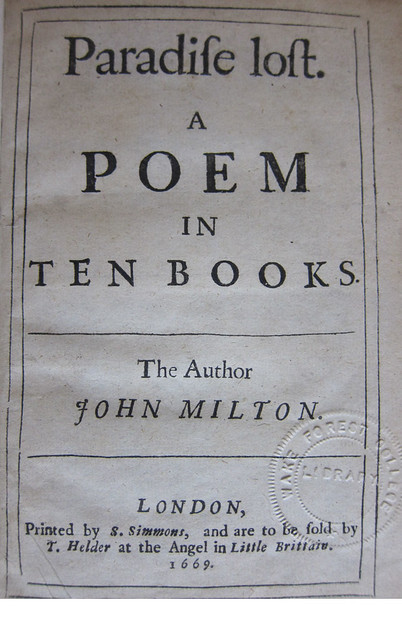 Sales of the work were sluggish at first, and Simmons reissued the first edition sheets of Paradise Lost with seven different title pages between 1667 and 1669. The 1669 reissue included, as per Simmons’s note to the reader, a 14-page “Argument” that provided a prose summary of each book’s plot. 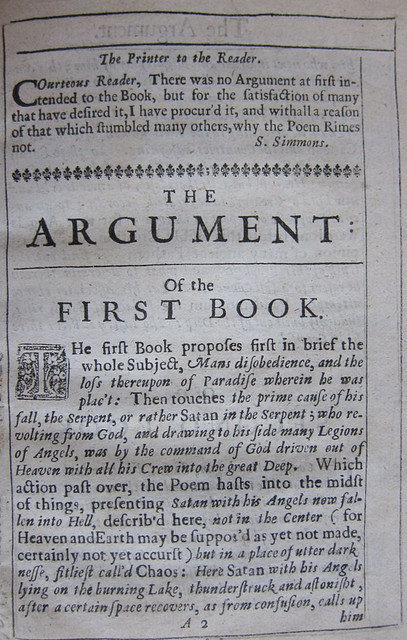 The Printer to the Reader
Courteous Reader, There was no Argument at first intended to the Book, but for the satisfaction of many that have desired it, I have procur’d it, and whithall a reason of that which stumbled many others, why the Poem Rimes not.
S. Simmons

It also includes Milton’s impassioned explanation of “why the Poem Rimes not”:

The Measure is English Heroic Verse without Rime, as that of Homer in Greek, and of Virgil in Latin; Rime being no necessary adjunct or true Ornament of Poem or good Verse, in longer Works especially, but the Invention of a barbarous Age, to set off wretched matter and lame Meeter…. This neglect then of Rime so little is to be taken for a defect, though it may seem so perhaps to vulgar Readers, that it rather is to be esteem’d as an example set, the first in English, of ancient liberty recover’d to Heroic Poem from the troublesom and modern bondage of Rimeing.

It is not surprising that Milton’s first readers were nonplussed by his use of unrhymed iambic pentameter, since it was seldom used at the time except for dramatic works. But his influence on succeeding generations of English poets was great, and by the 19th century blank verse was the standard form for long poems. 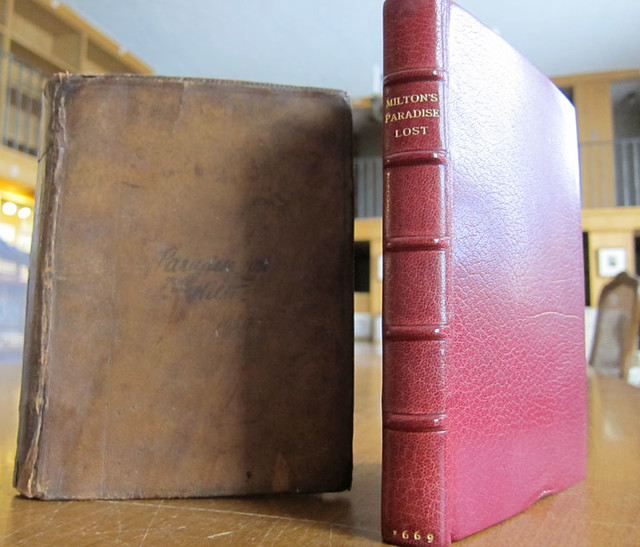 Wake Forest’s Special Collections holds two copies of the 1669 Paradise Lost. The first copy was purchased in 1949 by the Friends of the Wake Forest College Library in memory of alumnus Joseph Quincy Adams, who was the first Director of the Folger Shakespeare Library. This copy has been rebound in 20th century red morocco. 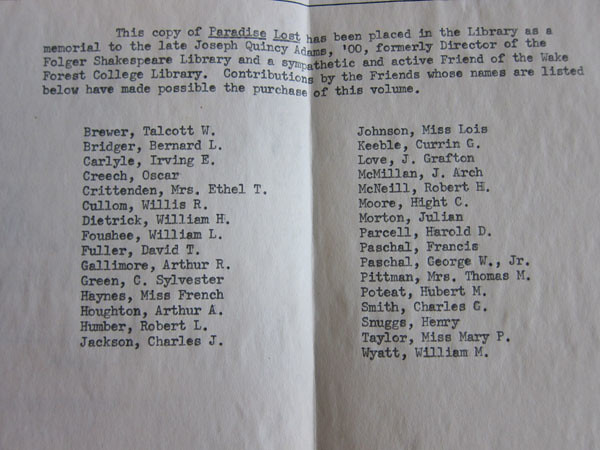 The second copy is from the library of Charles H. Babcock. It is bound in an unmarked brown calf leather typical of inexpensive bindings of the 16th-18th centuries. This book’s known provenance begins with a Robert Wynne who signed and dated the volume on April 20, 1719. It passed through the collections of railroad millionaire Ross Winans and well-known collector Marshall Clifford Lefferts before being purchased by Babcock, who eventually donated his library to Wake Forest College.