Ethiopia, the oldest independent nation in Africa, has a unique Christian tradition dating back to the 4th century. The Ethiopian Orthodox Church developed largely in isolation after the Islamic conquest of Egypt in the 640’s. But Christianity remained the official state religion for many centuries, and the Ethiopian imperial family claimed to be descended directly from the Biblical King Solomon.

The Ethiopian Bible is unique, containing several apocryphal books that are preserved nowhere else. The Ethiopian Church maintained a strong tradition of manuscript Bibles and other religious texts, and illuminated Bibles were very popular from at least the 12th century onward. The 15th century was a golden age of artistic achievement in Ethiopian illuminated Bibles, and many later manuscripts contain copies of illustrations from this period. Ethiopian iconography, although it shows some influence of European and especially Byzantine artistic traditions, is as distinctive as the religious tradition from which it stems. 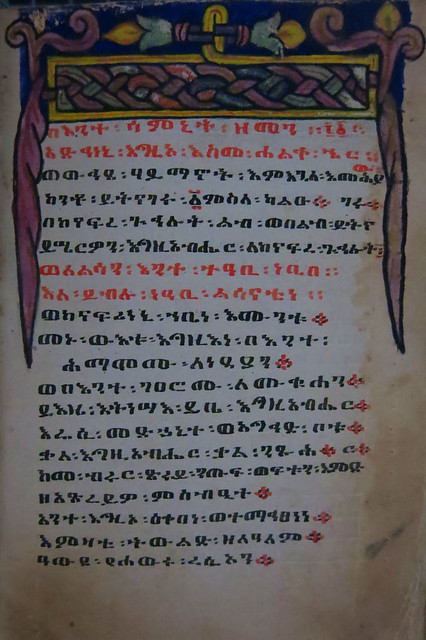 The Ethiopian manuscript in ZSR’s Special Collections is a psalter (a collection of the Psalms of David from the Christian Old Testament) probably dating from the late 18th or early 19th century. The printing press was not widely used in most of Africa until the mid-19th century, so a strong manuscript tradition persisted much longer that it had in Europe. The psalter is written in Ge’ez, a syllabic script traditionally used for Ethiopian liturgical texts, in red and black ink on vellum pages. Some pages, like the one pictured above, have decorative headpieces.

The psalter also has five full-page illustrations with iconography very typical of Ethiopian religious texts. The colors are bright and saturated, and the figures are outlined in black and are depicted in full face with wide eyes (in the Ethiopian as in many other African artistic traditions, only enemies are depicted in profile).

In addition to King David pictured above, there is a crucifixion scene. 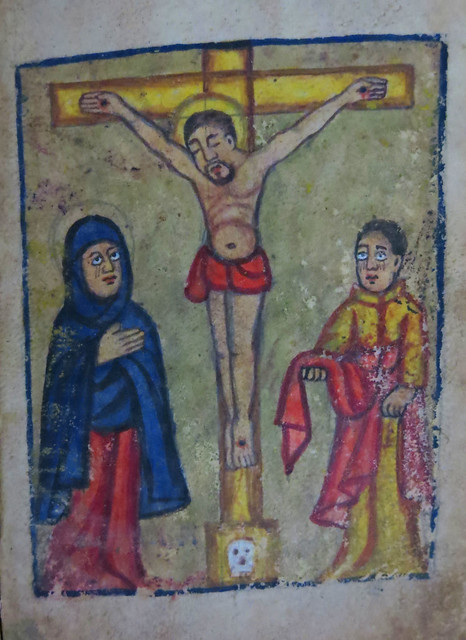 Mary’s halo and the tears on her face and St. John’s were added in pencil by a later owner of the book.

Illustrations of St. George slaying a dragon and of the Madonna and child are featured on facing pages: 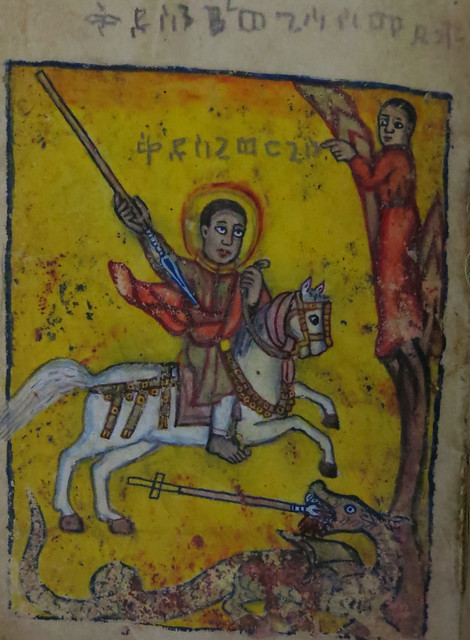 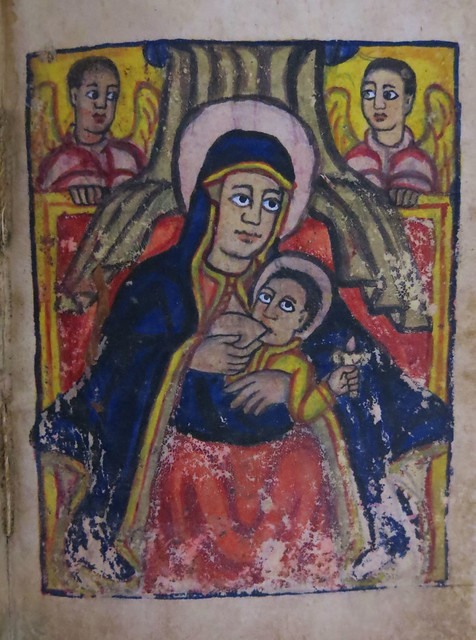 Both the St. George legend and the cult of the Virgin Mary were extremely important in the Ethiopian religious tradition. Illustrations of St. George slaying the dragon to rescue a north African princess were common in Ethiopian Bibles. And since the saint was also supposed to be the protector and frequent companion of Mary, depictions of George were often juxtaposed with  illustrations of the Virgin and the infant Christ.

The final illustration is a figure of an aristocratic Ethiopian man in contemporary dress holding a small book. 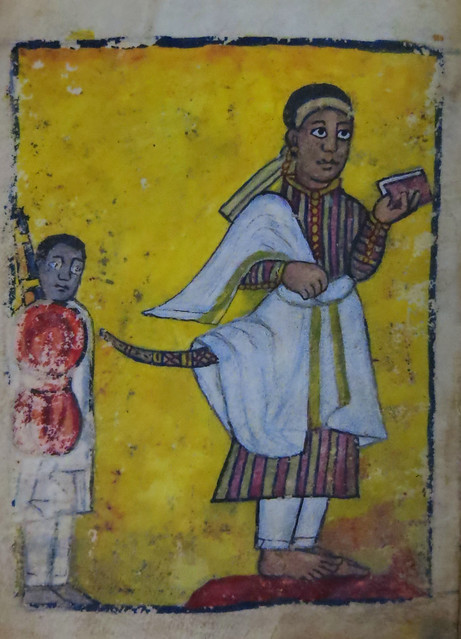 This is almost certainly a depiction of the patron who commissioned the psalter. The volume in his hand looks very similar to the manuscript book in the ZSR collection. 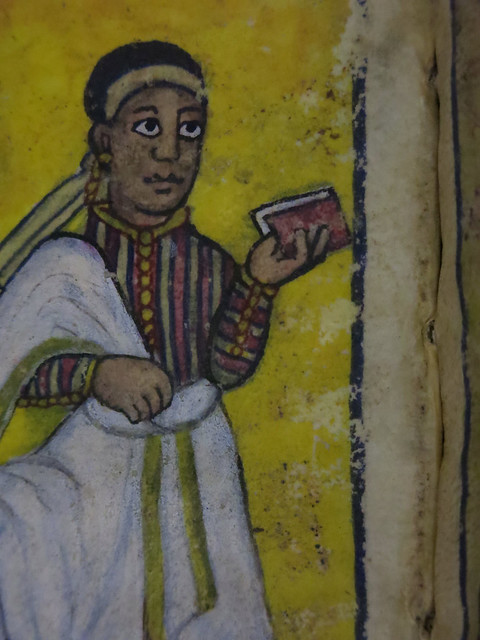 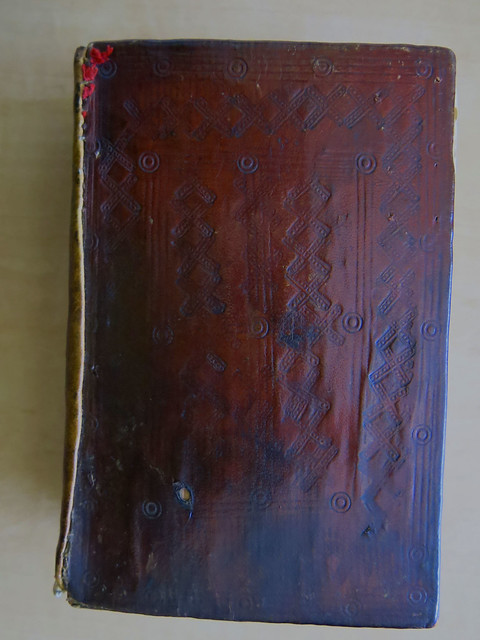 The book also has a leather cover and carrying case. This type of case, called a mahedar, is very typical of Ethiopian Bibles from this time period. 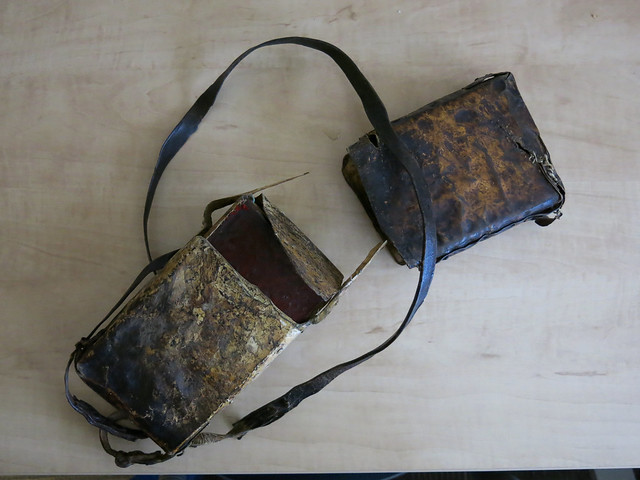 Small books like this one were intended for personal use, in contrast to larger volumes for church or ceremonial uses. The portability and personalized iconography of this psalter suggest that it was an object of private devotion and study. There is also much evidence of use by a later owner in the book itself. There are pencil notes throughout the book and extensive notes and sketches on the endpapers. At least one of the book’s owners apparently had an artistic bent: 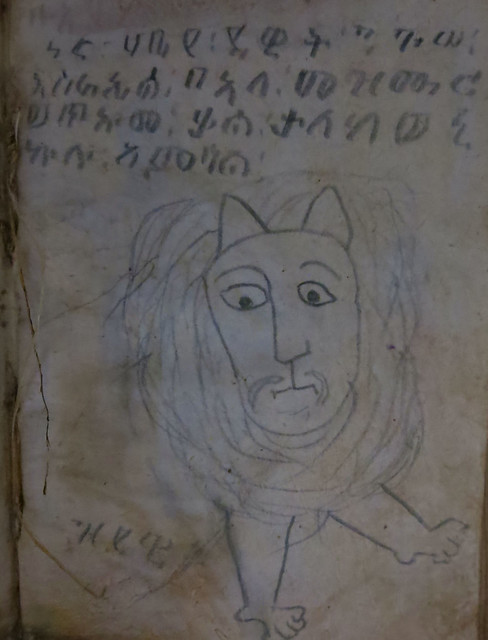 Ethiopian manuscript texts like this one are found in libraries and private collections throughout the world. Many were dispersed in 1868 after British troops defeated the Ethiopian Emperor Tewodros and looted the churches and monasteries of Maqdala. The exact origins of the ZSR manuscript psalter are unknown; it was acquired as a gift in the 1940’s as part of the personal collection of Oscar T. Smith.