by Megan Mulder on March 8, 2019 in Exhibits in Special Collections

The Silk Road – the term coined in the 19th century for the network of Central Asian trade routes that flourished between roughly 200 B.C.E. and 1400 C.E. – today conjures up images of camel caravans carrying exotic luxury goods like silks, spices, porcelain, and perfumes. But the most important trade good on the Silk Road was arguably a more mundane one: paper.

The spring exhibit in ZSR Library Special Collections & Archives, Paper Roads: Cultural Exchange in the Age of Print, shows how works on paper became a medium of cultural exchange, through maps, drawings, travelers’ tales, and translations. This exhibit of books, maps, and prints from Wake Forest collections traces these interactions from the early modern period through the 19th century. 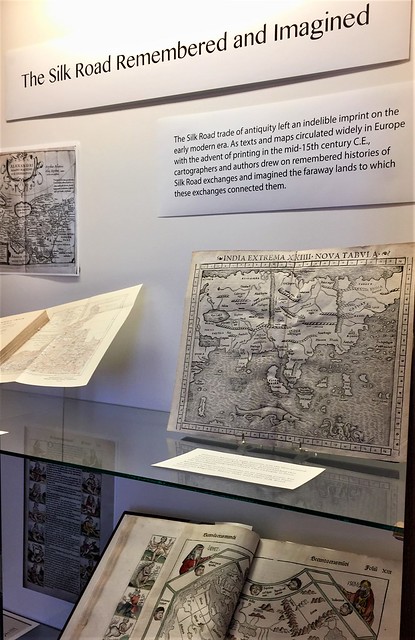 Papermaking technology was invented in China sometime before the first century C.E. It spread throughout Asia and eventually reached the Middle East, where it was eagerly adopted in the Islamic world. By the 12th century paper had arrived in Europe. When a system for printing with moveable type was invented and spread quickly throughout Europe in the mid-1400s, paper became the medium of choice for disseminating texts and images.

In Europe the age of print began just as travel on the overland Silk Road was waning. As this exhibit shows, the profusion of printed texts, maps, and images that began in the mid-15th century preserved the Silk Road in the imaginations of people who had never experienced it.

The movement of information on paper during and after the Silk Road period facilitated the sharing of art, science, technology, and religious beliefs across a wide expanse of geographic space. And the discovery of preserved documents by archaeologists in the 20th century has given us a window into the past lives of travelers and inhabitants along the Silk Road.

The Special Collections & Archives exhibit is part of the 2018-2019 Wake Forest Silk Road Series. It is presented in conjunction with two related exhibits from our campus partners. At the Museum of Anthropology, the exhibit Stoneware on the Silk Roads: Ceramics from the Changsha Kilns will open on March 12. And at the Charlotte and Philip Hanes Gallery, the exhibit City of Broken Shadows features works by contemporary artist Gianni Cestari interpreting Italo Calvino’s novel Invisible Cities.

On March 26 at 4:00 p.m., Gianni Cestari will visit Special Collections & Archives for a special event, Imagined Geographies: Mapping the Silk Road. All are welcome to attend this discussion of how we create visual representations of places that may exist only in imagination. Contact archives@wfu.edu for more information.

Paper Roads will be on exhibit in the Special Collections & Archives reading room (ZSR 625) through May 31. Visitors are welcome any time during the departments open hours, Monday-Friday, 9 a.m. – 5 p.m. Guided tours and evening/weekend hours are available by appointment. Please contact archives@wfu.edu or call 336-758-5091 for more information.

3 Comments on ‘Paper Trails on the Silk Road’