by Craig Fansler on May 27, 2021 in Professional Development 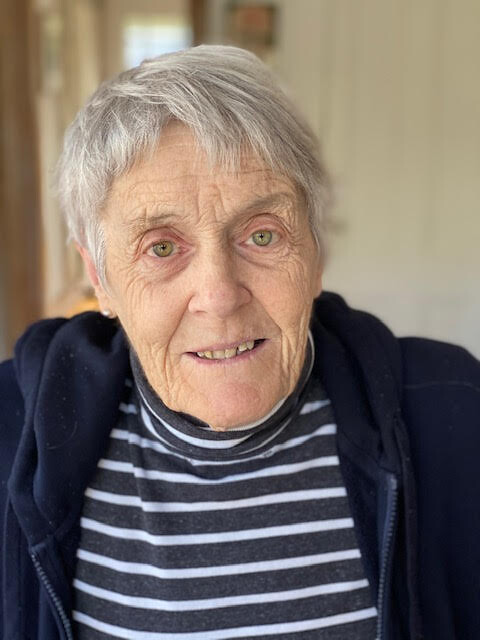 In April of 2020, I was able to locate and interview Dolmen Press artist, Leslie MacWeeney. Just finding Leslie and being able to interview her was a thrill. I did a blog post in Irish Ink about her in 2016. However, it’s one thing to read about someone and put together a bio, but quite another to actually talk with them. Conversations are more spontaneous. with threads that lead to things you’d never thought of, and this was true during my conversation with Leslie MacWeeney.

When I located Leslie, she was staying with her son in Sag Harbor, NY, because at the time, her hometown, Boston, MA was having a Covid outbreak. She told me that her Boston non-profit organization, Living Art, had stopped due to the quarantine and was anxious for it to get back to working.

These are a few tidbits from our discussion of her life in art before the Dolmen Press and afterwards.

Leslie had Tuberculosis when she was young and was bedridden for four years. She did a lot of drawing during that time. By the time she was 14 and could walk again, her father got her into the National College of Art and Design. She describes her experience there as a young girl among college aged students:

“Everyone there were all 18 and older. As far as I was concerned, and I must have been an awful little prig, I thought they were very ignorant. Because they went to school, but they hadn’t any art education history or art training. They didn’t know anything about anybody who made art down through the centuries. Whereas I did of course. Because of books in the family, and my sister especially. She told me that I read out the whole little local library. There was nothing left. I learned to read and I read day and night. I didn’t sleep that many hours and I did read a lot. Often they were beyond my age as I realized afterwards. I was reading Sarte when I was 14, maybe 15, without anyone giving me any help or explanations. I was very impressed by him.”

It was at the National College of Art and Design that Leslie met another future Dolmen Press artist, Pauline Bewick. She went on to study at the Ecole de Beau Arts in Paris.

After returning to Dublin, Leslie met Liam and Jo Miller, who founded and ran the Dolmen Press.

“After a while, they offered me a space in their house, which was only a street away from where I was living. I was living in an apartment that my parents had allowed me to get, because I said I can’t live in this outhouse any more. The apartment was at the top of a Georgian house, four stories up, and it had no hot water, and it had no toilet, and no bathroom. They were on another floor, and I had to share it with other people. And that was alright. A different kind of living. Liam and Jo said that for a studio space-they lived in a big Georgian house a few streets away, then I could have that room as a studio. That’s where I worked most of the time, and it was very, very nice. It was great to have that much space. I don’t think you have to walk away from work and party if you like, and it didn’t mean I couldn’t do work in my apartment, because I could. I made the second room for a long time into a studio there too. But then, one of my friends needed somewhere to live, and so I sublet to her. Ruth Brandt (another Dolmen Press artist). Ruth and I were very good friends. It was nice having her as a roommate because we understood each other and our lives were intertwined. You know, independent.”

I mentioned that I had organized the Dolmen Press printing blocks when I was in library school and fell in love with them – especially Elizabeth Rivers. She responded with this statement about woodcut vs. Elizabeth Rivers and wood engraving:

“I lived on Upper Mount Street. The Dolmen Press was on Upper Mount Street. Anne Yeats lived on Upper Mount Street. Anne Yeats is the daughter of W.B. Yeats, and I worked with Anne a lot. I lived just across the road, and I helped her cataloging the family’s work. And she also was an artist, and a good artist by the way. She came on the board of the Graphic Studio, which I and another artist called Patrick Heath founded in a basement, two basements down the street, from the Dolmen Press. And Anne came on the board. The Board of the Graphic Studio and the 3 or 4 other board members, Elizabeth Rivers was one, Anne Yeats, Liam (Miller) was on it of course, and myself, and there was one other person, I can’t remember who it was at this minute. We gave artists the opportunity to learn printmaking, because the Printmaking Department of the National College of Art and Design had given up years before. They actually sold all their equipment and so it was very hard to find printing presses for artists to make their art and proof it and print it. Liam Miller was helpful. But the person who really cracked it down was an artist called Patrick Hickey. Patrick Hickey, as far as I know, never did any illustrations for Liam, but of course they knew each other. Patrick Hickey and I were the founders of the Graphic Studio, which still exists. It isn’t on Mount Street anymore, and it has grown and survived.”

I mentioned that we had some Cuala Press broadsides with the artwork of Jack Yeats.

Nice, one of my first jobs, I was employed by an antique shop in central Dublin. I was sent up to the attic for their prints of Jack Yeats, which I had to hand color. I would sit at the desk, hand coloring them and these were Cuala Press things, and then they were sold in the antique shop downstairs. I was paid 14 pounds a week. I don’t know how to translate that-it was like a pittance. I didn’t last a very long time there, because here I was all alone in the attic painting these damn things.”

Leslie asked me if I came across the name Bridget Swinton. I said yes, and she commented:

“She was a very good friend of Liam and Jo (Miller). They got on awfully well together. And she did some illustrations. She went to live in Denmark. She married a Dane, and I think she worked long distance for Liam. I can’t quite remember the dates for this.”
(I said Bridget Swinton is the one person in all the artists of the Dolmen Press that I can’t find anything about.)
Leslie then said “I know her story. It’s an interesting story. She was adopted, and she was adopted by a single woman-unusual in those days not to have two parents. Her mother was from a wealthy north of England family, who had big money. I think it was from manufacturing fabric, I’m not quite sure. But anyway, she came from big money and came to Ireland and bought a big house in Tipperary. She was very keen on the home, so she bought it, and she got to be well known in the county.in Tipperary and the horsey crowd, as they were called. She has this child she’d adopted and the child was named Bridget, Bridget Swinton. And she came to the art school at the same time as I did, and as Pauline did and as Una Fountain(Watters) did. We were all good friends, and we all had very different backgrounds. Una’s family was writers and poets and part of the 1918 uprising and 1922 period in Irish history. Bridget has this mother in Tipperary, wealthy, she was worried about Bridget, worried about Bridget being respectful and everything. And I was produced, and went to stay with them, I was approved of. She did eventually get married and she had 5 children. Her connection with Ireland was extremely stretched. The fact that she had 5 children and her mother was in Tipperary made it hard to get back and see her mother. She didn’t come very often-very, very seldom. But anyway, she doesn’t have the connections in Ireland which is probably why you are not finding anything about her.”

One of the Irish poets the Dolmen Press employed was Arland Ussher. His book, The Twenty Two Cards of the Tarot was published in 1970. Leslie described her artistic work on this project:

“Liam had us, and when I say us, my cousin and I, we had to hand color the special edition of the twentieth edition of the Twenty-two Keys of the Tarot. We stayed up 2 nights and 2 days, coloring with watercolor, and each block had to have 7 colors. The reason that he particularly wanted it was because when Arland Ussher came back from Paris with the pack that he’d bought in Paris of the Keys of the Tarot, you know: the cards. I have them, he gave them to me. Let’s use the colors, so he said let’s use watercolor and we did an edition of, was it 50? Anyway, we colored them until we nearly went mad. They were in sheets-they hadn’t been cut yet, to be bound, these particular ones. Then he discovered he was running out of paper. He’d bought the paper from Holland, and he couldn’t get the paper, and he put these hand colored sets aside, and he never bound them. I had them and I brought them to Boston College to see if they’d buy them, because I thought it was a pity they were in my attic in Kilkenny, you know, they were sitting, not being seen by anybody, except someone who might be interested in the Twenty-Two Keys of the Tarot. I don’t know if you know this, but Arland Ussher’s Great Great Great Grandfather, I think, was one of the founders of Trinity College, Dublin. It’s an important family, and a very intellectual family. So anyway, Boston College said yes, they’d be interested.”

It is truly wonderful to find an individual like Leslie MacWeeney, who is so forthcoming about her involvement with one of our premier collections in Special Collections and Archives at ZSR Library. I learned so much speaking with her and hope to speak with her again.

6 Comments on ‘An Interview with Dolmen Press artist, Leslie MacWeeney’