by Craig Fansler on June 29, 2022 in Professional Development

From April 5 to June 21, each Tuesday night from 6-8:30 pm, I attended an online workshop with Karen Hanmer. Karen possesses the knowledge of how books are constructed from the beginning to the present. She is a wonderful teacher. The workshop, entitled Biblio Tech, is geared toward making historical and modern models with a focus on board attachment (ie.- how the boards are attached to the textblock). These bindings are reverse engineered, so that the viewer can see how the binding is constructed. For most of the bindings, we did not cover them with leather or bookcloth. During the workshop we made these bindings: Tacketed binding, Crossed Structure, Ethiopian, Medieval, Laced-on boards, Scaleboard, Split Board, Case Binding, and Sewn Boards bindings. Each of the bindings were the same size (3 ½” x 4 ½”) because if they were full sized, the workshop would have taken 3 years!. 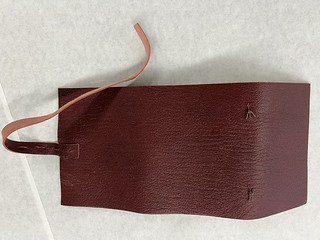 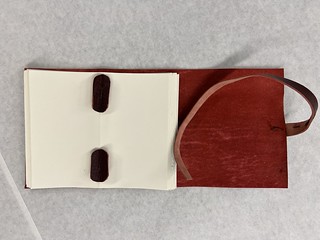 The Tacketed Binding is made up of a thick, single signature, held in place by tackets in a limp leather wrapper. Tacketed bindings date to approximately the 4th century. At this time,they would have been essentially a stack of papyrus or parchment, folded in half, stabbed through the fold, and sewn through both the pages and cover. Tackets would have been placed on the inside to prevent the cord from being pulled through the binding. Tackets might be seen as an early staple or as a leather washer of sorts. There is no adhesive used in this binding method. 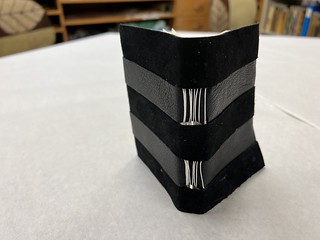 A Crossed Structure is a contemporary binding style that uses an medieval style of binding called the ‘Long Stitch’ which was originally used for lacing a text block into vellum bindings. The Long Stitch involves sewing the textblock directly through the cover of the book. This can mean sewing through pre-cut slots on the spine of the book or punched holes. 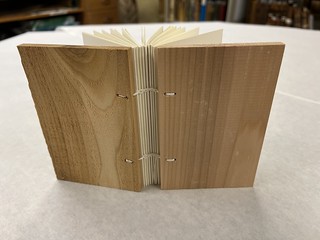 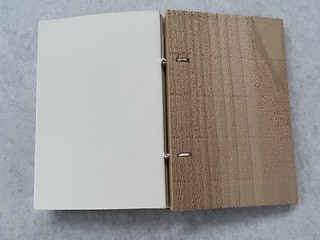 The Ethiopian Binding goes back to the 4th century when Rome made Christianity legal in their empire, and the binding style, along with Christian texts, migrated to Ethiopia. The Ethiopian binding uses 2 needles to sew the wood covers and the text block together using a chain stitch. To make this model, we drilled 3 holes at each sewing station on the board. The thread goes from the sewing station on the spine into a hole on the edge of the board. From this point, the thread goes diagonally through two holes on the top of the wooden board. Historically, these bindings were covered with leather and placed into leather pouches. Special Collections & Archives has a fine example of an Ethiopian binding. 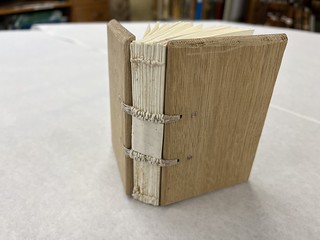 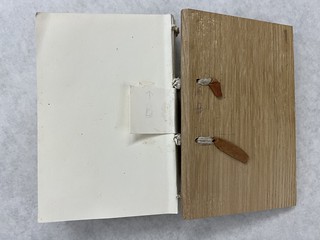 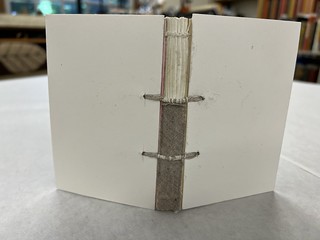 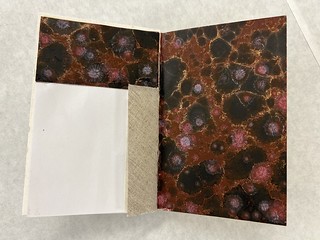 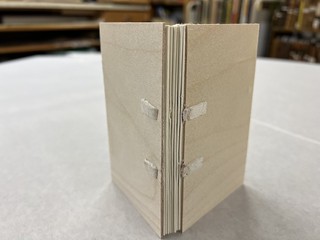 The Scaleboard Binding is a Colonial American style of binding. Pasteboard was scarce in Colonial America, and thin pieces of board were substituted. The signatures of the text block were not sewn, and a chisel was used to punch holes, through which alum-tawed leather thongs were laced. These leather pieces were pushed through the textblock and boards, and glued onto the wooden covers. 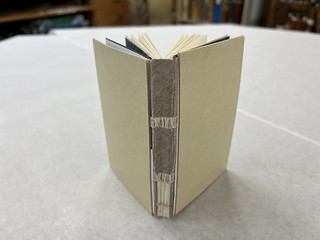 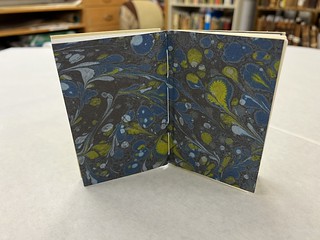 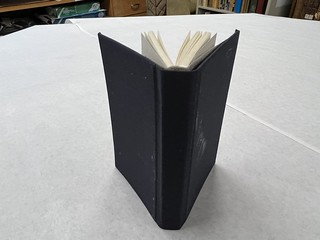 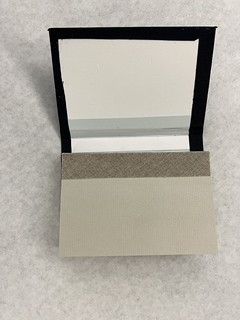 The Double-fan Adhesive Binding has a German case and a bit of a contemporary binding. Many, in fact almost all, books are bound this way today. The text block is glued up on the spine edge and the pages are fanned to get the adhesive in between the pages for good adhesion. 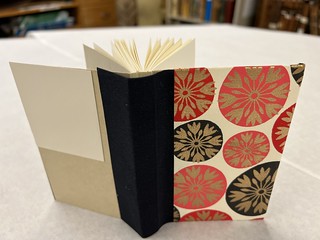 A Sewn Board Binding is a modern update of a late Coptic binding, and shares structural features with the Ethiopian binding. The text block sewing is sewn through a piece of cardstock, which becomes part of the cover board. This ‘board sandwich’ is covered with paper and endsheets and does not show.

This workshop taught me so much! I’d never used a rasp or a chisel on a book before! I learned new ways of sewing, and especially new ways of attaching the text block to the boards/covers of a book in progress. I was also able to get a glimpse into how the book form progressed through time, and how each little change led to other little change. I am hopeful some of these models will be used in Special Collections & Archives instruction.

Frost, Gary. A Crafted Typology of the Codex:Book Modelmaking as an Approach to Material Book Study.Ann Arbor, MI: The Legacy Press, 2021.