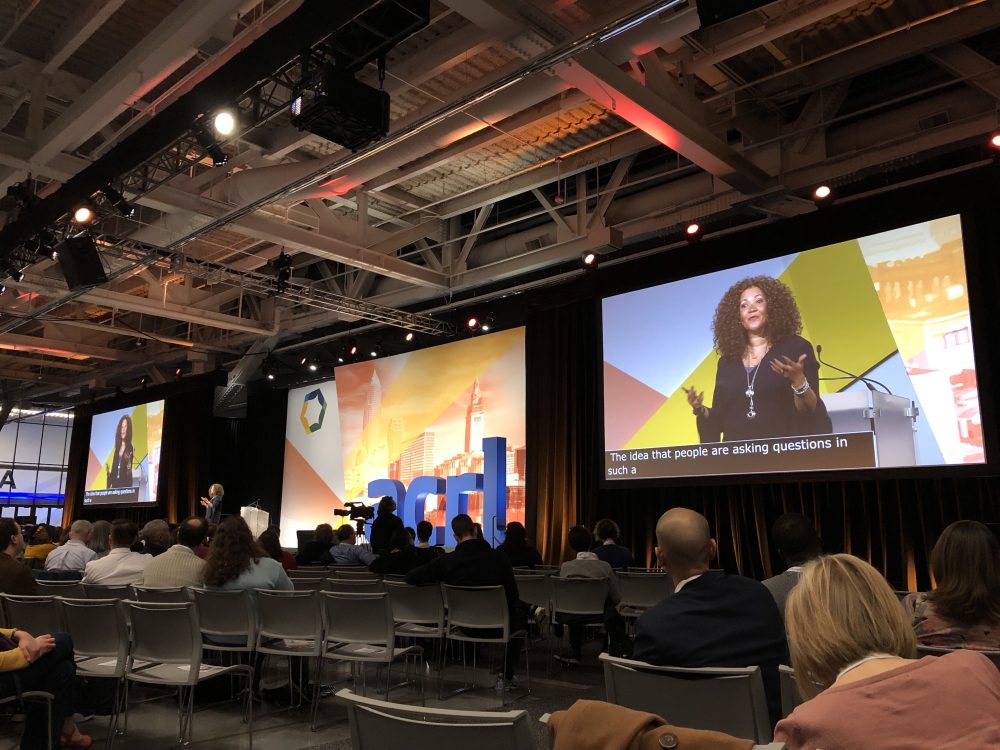 It was great to be back at an ACRL Conference after an 8 year hiatus. I repeatedly wondered why I let myself miss the past three conferences as I reconnected with colleagues and friends from elsewhere, attended thought-provoking sessions, and enjoyed exploring a new-to-me city. The energy and excitement of a *big* conference are rejuvenating... more ›

I attended UNCG’s Scholarly Communication Symposium in Greensboro on Monday April 15, and I have to say, for a Monday Symposium, it could not have kicked off the week better if it had tried. This years symposium focused on infrastructure in digital scholarship projects, from the organizational to technological. Dr. David Eltis, professor Emeritus at... more ›

Wow! ACRL was made-up of many firsts for me. It was my first time at ACRL, or any big conference for that matter, my first road trip longer than 4 hours (thank you to Meghan, Kathy & Molly for getting me to Cleveland safely) and my first time facilitating two roundtable discussions. Getting to be... more ›

ACRL is hands-down my favorite conference. The ideas that come out of this event, both through sessions and through discussions with other librarians and vendors, are so exciting and energizing, that even with a strained back that kept me away from some sessions, it was still an awesome few days. I will let others who... more ›

I liked the format of Amanda’s blog post on ACRL 2019 so much that I’m going to use it here! I’ve made it to four of the last five ACRL conference (I skipped Portland to attend the First-Year Experience Conference) and every year I bring back a list of ideas to try at ZSR! Sometimes... more ›

Spring had come to Athens when a few dozen intrepid business librarians convened for the first-ever Southern Academic Business Librarians Conference (SOUCABL, pronounced “sociable”) on the last weekend in March. SOUCABL was intended to be ‘an affordable opportunity for librarians to discuss business librarianship and to network with other librarians in the region,’ in my... more ›

This was my first ever ACRL, and it was one to remember. Mostly because it was also my first conference with a baby and three year old in tow, but also because I was a part of two presentations. More on that later. What I Learned I was really impressed by the quality of the... more ›

This year, the North Carolina Serials Conference was held on Monday, April 1 and without a practical joke to be found.  What was there was a combination of practical experiences from concurrent sessions and the big picture concepts featured at both the opening and closing keynotes.  Librarians, support staff, students, administrators, vendors, and publishers converged... more ›

On Monday, April 1st, Chris and I went to Chapel Hill for the 27th Annual North Carolina Serials Conference. I missed last year’s conference so it was good to make it to this one and catch up with friends and colleagues from the North Carolina serials community. A number of the sessions were interesting, but... more ›

Molly at the NC Serials Conference

Last Monday, April 1, found me experiencing something new! I attended the NC Serials Conference in Chapel Hill, where I gave the closing keynote. When invited last fall, my initial reaction was, “who me?!”, but with Chris Burris’s and Steve Kelley’s welcome encouragement, I accepted. It was fun, and challenging, to prep a talk that... more ›